Here is another news story I thought I would share:
BRYANT, Ark. (AP) — Police said a woman has been arrested for allegedly slipping s

ome tranquilizers into her boss's coffee because she felt "he needed to chill out." Police said the 24-year-old woman admitted to detectives that she slipped the drugs into veteranarian John Duckett's drink. Officers said Duckett knew something was wrong shortly after drinking some of the coffee Tuesday morning.
Officers said the woman cleaned the cages at the the Reynolds Road Animal Clinic.
A judge set bond at $25,000 Friday and a jailer said the woman was still being held Friday. Her next court appearance is scheduled for April 21.
Copyright 2009 The Associated Press. All rights reserved. This material may not be published, broadcast, rewritten or redistributed.
Barrington Broadcasting is a member of the AP Network. 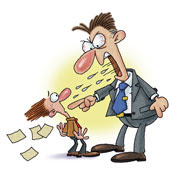 1. Oh, I wish I had read this before I retired, I would have HAD to share this with my co-workers for a good laugh. (If anyone from my old workplace is reading this: does it remind you of anyone?!) Our hospital CEO is/was a hyper man, a tad crazy and a Type A on steroids! He still comes to work before 6 p.m. and rarely leaves before 6 or 7 pm. He would call you to meet him about something at Starbucks before 7 a.m. or on weekends.
2. Haven't we ALL had a boss that needed "to chill out"? My last boss? All I can say is: WOW.
Besides all the things listed above, he had (and probably still has) an office wall full of sticky note "ideas" that were color-coded. Need I say more?

3. Her boss was a Vet? I mean, I can't imagine a Vet that needed to "chill out". The animals he cared for must have felt it, because they can sense these kinds of things. I had an Irish Setter once who, the minute we got to the Vet's office parking lot...would stiffen her legs and not walk and we had to drag her in. She'd literally "put on the brakes" and not want to go a step farther. Don't tell ME they can't tell when something at the Vets is not gong to be pleasant when they get there! So, you can imagine how a hard-ass, hyper Vet wouldn't send signals to any animal he treated to try to get the heck out of Dodge.

4. The lady that did this cleaned the cages, for God's sake. I mean....you think YOUR job stinks?! How'd you like to do hers...day after day...???? With a hyper boss? Do you blame her?
5. I'm going to get arrested. Again. For copying this article and blogging about it. I mean allegedly copying it.....

6. Tranquilizers aren't such a bad thing, right? Maybe it was Boss's Day and she just wanted to give him a present? A little trinket for Duckett. Geesh! What's the big deal?


7. Viagra would have been my drug of choice for him. A little F--kit for Duckett.
8. I thought morning coffee at work was supposed to perk you up? (Evidently her brand was a little smoother of a blend). Good, to the last drop.
9. I wonder if her boss has "chilled out" (just from her attempt)? Did he "get it"??? Or, is he even worse now?

10. Wonder how this woman will explain this incident when she goes job hunting for another job? I can hear it now:

Hahaha...I have the opposite problem. My boss needs to perk up and wake up a bit. Sometimes we catch him nodding off. It's sad really because he's only 45 so he is definitely not geriatric and not young enough to be out partying all night. Makes you wonder what he's up to except he moves around like a zombie everyday. Oops, now I suppose that I am going to get arrested!!

I wish I had thought about putting exlax in my last bosses coffee!!!!!! He was the ultimate dork.

LOL that would be a very bad interview!

When I was reading this I was thinking like you, I would have slipped viagra in his coffee:) I have had some horrible bosses and it would have been fun to see them relax, but I dont think I would slip any drugs in there drinks:)

You have two awards at my site. I know you already have the one, but you fit so weel in the category, so I chose you
Have a great day and Congrats
Sara

Loree: I wish I would have had a boss that was a nodder...all my life, I have had maniacs. (Men OR women)

Brittany: I doubt if she will get hired anywhere again, after doing that!

Sara: No, I would have lost my license as a Nurse, but it is still fun to fantasize about it!
Wow...TWO awards?? Aria from Aria'z Ink gave me one too...this must be my lucky day!!!! Thanks SO much!! I will stop by your blog today and blog about it later this week sometime.

When I was a wee young girl working as a waitress thru college - I had a couple male co-workers that would keep making inappropriate remarks and would bug me. I used to put hot sauce in their unattended ice tea drinks all the time and if they got a meal at lunch break. It was worth it to see them spit it out and say "hey - who did this?!" ha,ha,ha

RUT ROH! THEY'RE COMING TO TAKE YOU AWAY!! HA HA!...is a song
I love your posts!

Debb: Thanks Sweetie! I love writing them!

See, if she had just learned that word earlier, she wouldn't be trying to post bail right now, and he could possibly be asleep under the examination table, cuddled up with a doberman pincer...

Well, he needs to be thankful; she DOES clean cages, it could have been worse, seriously..

Ahem, okay so being a vet is quite stressful you know. One animal has the squirts, a client is at the front desk with a sick cat, for like 3 weeks, with no money, animal control just brought in a crazed pit bull, and your employee's Cymbalta meds are not working for her that day.
I loved reading this, so I read it out loud to my husband. We just had a good laugh. You find some fun stuff!

All I can say is that if I was ever to do something like that, I'd make sure I was never caught.

DVM's Wife: I can imagine that a Vet's life could be stressful! I mean, the dog can't exactly tell him where it hurts, right? I LOVE it that you read it to your husband! You made my day!!

Ratty: You'd have to be creative to find a way not to get caught...but since you sneak up on those squirrels, you could probably do it!!