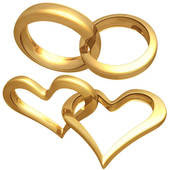 Polly at Angels in My Garden has tagged me to list all of the ways that I love my Husband.
I don't know if I will get to list ALL of them, but here goes:

1. I love that he is (and has always been) extremely ethical. I remember once a group of friends sitting around a campfire when the question came up of whether or not you would pay back a clerk if they made a mistake and gave you too much money back. He was the only man in the group who said yes he would. And I have seen him do it, many times.

2. For the wonderful father he is and continues to be. Nothing comes before family for him. He loves our daughters and grandkids unconditionally and with deep, deep feelings. He worries about them more than he lets on.

4. For always giving me the freedom to either quit a job or start another. When things got too stressed for me or I wanted excitement elsewhere, he was the first to say, "Honey, go ahead and quit if you want. You don't have to work if you don't want to, we will do just fine on a little less."
It gave me the freedom to have the courage to change jobs many times to something I thought I might want more.
5. For his patience with me.

6. For not gambling . For drinking only socially, now and then. For not doing drugs.
7. For never being verbally or physically abusive. Not ever. He hardly has raised his voice over the 36 years we have married. We have never had a serious fight. Not ever.
8. For giving me a zillion massages and head rubs. He does this almost every night while we watch TV.
9. For never making me feel like I shouldn't have bought something. I can buy clothes or something for the house with freedom, and never have to hide anything I have purchased from him.
10. For taking care of me every time I have been sick or had surgery. He waited on me hand and foot on all of those occassions.
11. For taking care of my terminally-ill mother in our home, to allow me to work as long as I could before she died. He lifted her to and from the toilet, helped re-position her, fed her and was as good as any nurse would be. He even let me sleep when she called for help during the night to get up to to the bathroom and went to took care of it himself.
12. For being there for me when my mom and dad died, holding my hand and crying as hard as I did when both happened.

13. For loving me during all my weight fluctuations and making me feel like the sexiest woman alive, no matter where my weight is at.
14. For buying me more jewelry than a woman could ever want. He loves gemstones and diamonds even more than me, and just says: "Think of it as an investment. We can sell them someday and they hold more value than the stock market". (He is so smart).
15. For embracing my friends like they are his. I have an annual reunion weekend with 8 of my childhood girlfriends, and he looks forward to it almost as much as me. He helps cook while they are here, and takes them on pontoon boat rides around the lake.
16. For working for almost 30 years at a job that he didn't like just because it provided us with good healthcare coverage, a decent wage and a good retirement. There are times I know he really wanted to quit, and despite my encouragement to do so, hung in there for a secure future for both of us.
17. For being out in the cold for more days than I care to remember: trying to fix the broken down old clunker cars that we owned. Often, we couldn't afford to get a mechanic to look at it, so he would be there in the cold working on the car to get it running again. Always got them working.
18. For taking our family on many camping trips when the kids were little, even though it sometimes also meant working on old camper electrical systems in the rain to get them working so we could go.
19. For being faithful to me in 36 years of marriage. And, never oggling at pretty women when I am with him (even though I am sure he wants to!)
20. For being as happy as I was at the birth of our two daughters and seeing pure love in his eyes at the hospital while holding them, newborn.
21. For fixing houses...he has fixed several (either the ones we lived in or ones we are presently renovating for investment). He plays along with my whims on this. (Honey, why don't we rip out that wall and add a built in closet?) "Ok, he says..I think I can do it!" And does it, he does. He is presently renovating an old house for me to open up an Antique Shop (which is something I have always wanted to do after I retired).

Now, I won't list who I am tagging for this blogger challenge. But anyone reading is also invited to list on their blog the reasons you love your spouse (alive or passed).
Posted by The Retired One at 10:30 AM

Email ThisBlogThis!Share to TwitterShare to FacebookShare to Pinterest
Labels: love, marriage, reasons to love a husband

Wow! You are a blessed woman, truly!

Insanity Kim: I know.I am blessed.

You have a true talent for putting your feelings into wonderful words and you share them with your heart in your writing style. It will be a pleasure to follow your blog.

Cathy C: Thanks Cathy! It will be so much fun having another Yooper read/follow my blog!!! Thanks for joining!

I think you are very lucky and blessed but I can't complaint either :) I wish you many more years of love together.

"For never making me feel like I shouldn't have bought something. I can buy clothes or something for the house with freedom, and never have to hide anything I have purchased from him"

Your husband sounds wonderful! I laughed at that one. Sounds familiar.
I've enjoyed your blog! What a fun person you are! I love all of your pics in your slideshow. Beautiful area you live in.
Stay warm;)

Loree: Thanks. I'm glad you are happy too!

DVM's Wife: Welcome aboard! It will be fun having a few YOOPERs joining the group, I was so excited to find your blog! Yes, I know wives who used to tell me:"Keep this at your house, my husband will get mad if he finds out I bought it!" I guess I can't conceive this, but I have seen it! I am so glad you like the blog..there are a lot of "older posts" you can go back and read too.