Raccoon! ( A story, but Scary, so not for Children)

I have a story today.
But I must warn you.
It is not for the light-hearted.
It is a bit shocking, and a bit sad.
But it did end in a happy ending.
So, if you have a bit of a weak stomach
you might want to not read all the way through.

I apologize ahead of time to those of you that are used to my
lighthearted or funny posts..
this will not be one of them...but I felt I had to tell my tale today....
I will warn you again when to stop
if you feel you cannot read all the way through it.
But I felt it important to tell it. 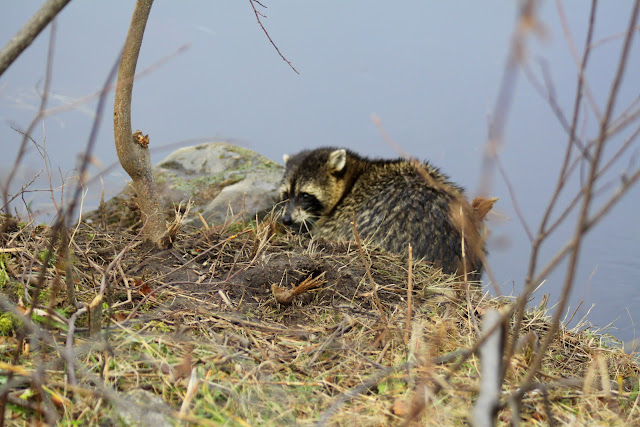 I was very surprised that as I came closer, he did not run away!: 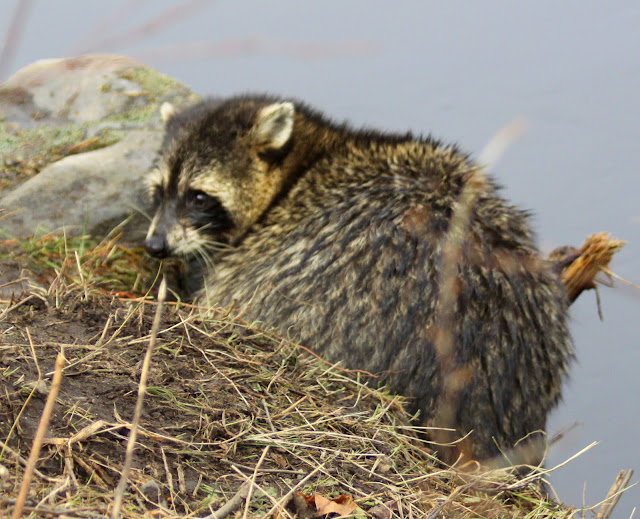 But as I came closer (using my telephoto lens still),
to me, he appeared either dead, scared
or sick: 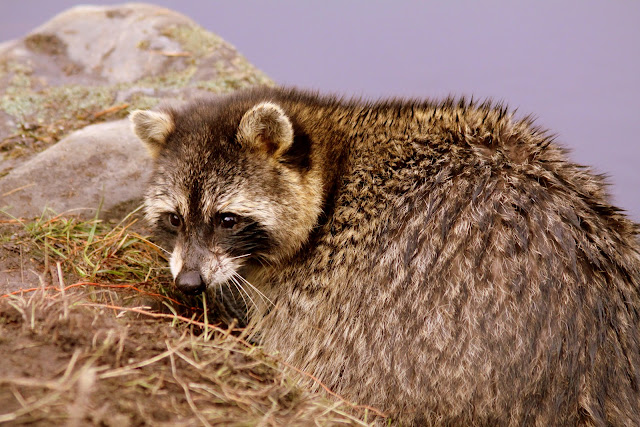 He looked straight at me.
To me, it was a look of pure fear: 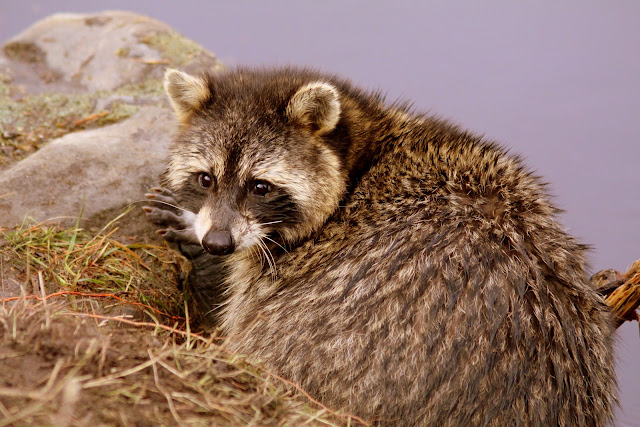 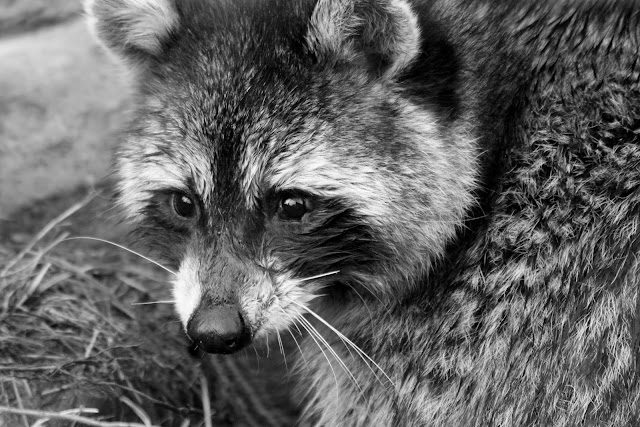 O.K.
Here is the part
NOT for children....
Not for the light hearted,
but
if you want to read on,
be warned...
but remember, it does have a happy ending.....
We found out soon enough
why he didn't run away.
Why he looked so pitifully sad....
He had gotten his foot caught in a trap
meant for a beaver or muskrat...
his foot was pinned!: 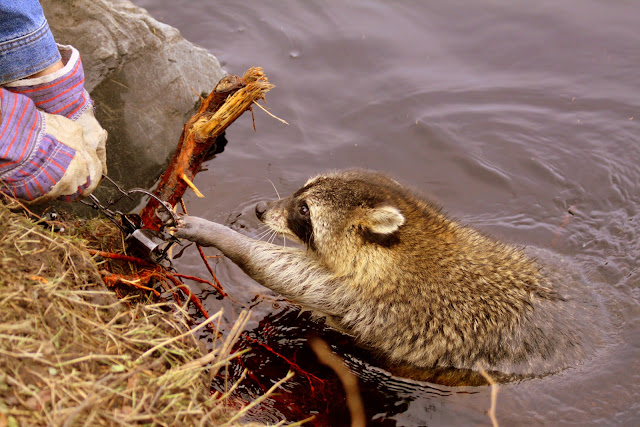 When I got done crying,
I noticed my husband had already gotten into action.
He ran to our truck, got a pair of gloves and a shovel
to try and pry his broken foot
out of the trap.
By now, the raccoon got even more scared.
I tried to reassure him and placed the shovel in front of his face,
between his face and the trap....
(so he wouldn't bite my husband
who was only trying to help him).
Luckily, it worked!
After just a few tries, my husband forced the trap open,
just wide enough to release
the raccoon's foot out of the trap.
At first,
the raccoon just sat in the water...stunned!: 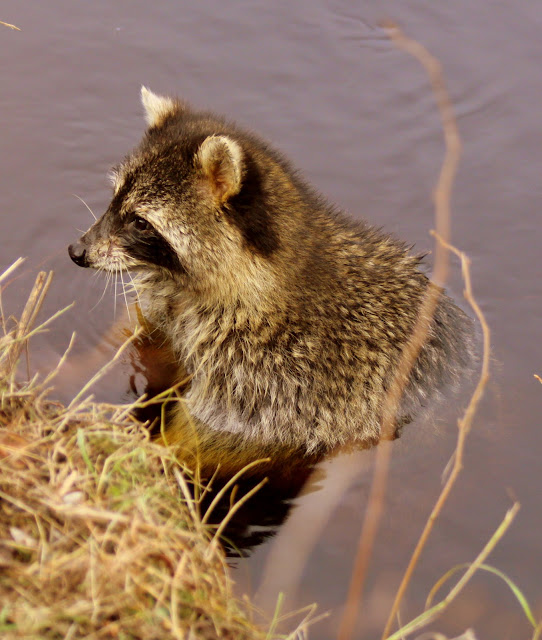 And he gave my husband the strangest look.
(I wish I would've gotten it on camera)...

It was almost a "thank you" look...
and
then he slowly swam away: 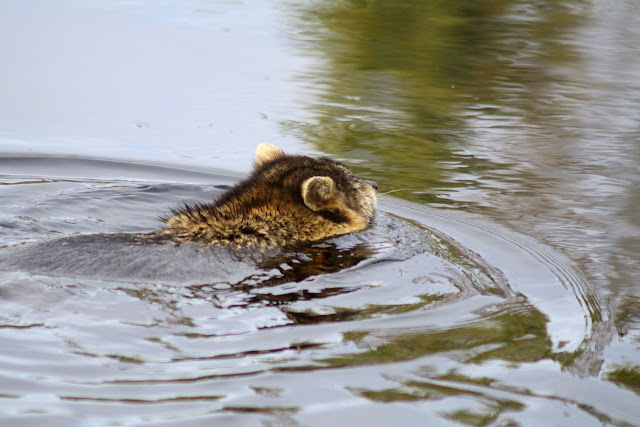 He made it all the way across the river,
against current: 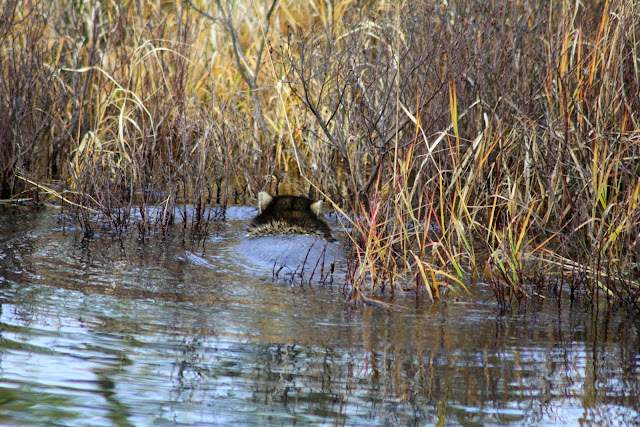 He made it up on shore
and we saw him disappear into the reeds....
We went home.
But he stayed in our minds for many days.
I harbored a sadness that I couldn't shake.
We so hoped he made it and lived.
Several days later, we talked to someone with wildlife experience...
He said he was pretty sure if he swam and got up on the opposite bank,
that we saved his life and that he probably lived.
If we had not come upon him that day and released him, he would've gotten hypothermia
in that frigid water and gotten exhausted and probably would've drowned.
I was so glad we came upon him, as hard as it was to witness....
I'd like to think we DID save his life that day.....
My hope is to go out there next spring and find him waddling up with the wife and a boatload
of little kiddie raccoons.....we will immediately recognize him, as his face
will be forever remembered in my heart.
Posted by The Retired One at 7:00 AM

Email ThisBlogThis!Share to TwitterShare to FacebookShare to Pinterest
Labels: a raccoon in a trap photograph, raccoon photographs

What a story, poor raccoon, hope he survived. Love those photo shots. Those photo alone already did tell the story. Lovely. Thanks for sharing.

Thank you people!!!I hope he survived.

Both of you are the heroes of the day.

What a wonderful thing you did, and I truly hope he lived. What a story! And hopefully it was a good ending. He was probably already hypothermic which would explain his slow behavior. Thank you for the story, and I'm adding my own wishes for his recovery.

Oh Joan, thank goodness you and your hubby came along when you did! That poor racoon! I believe everything happens for a reason and it seems to be that ya'll were meant to save that poor little creature! Thank you.

fantastic story, we would have done the same thing. i just hate that people set traps for anything. i don't get it and never have. good job on saving him and on your post

That raccoon was so lucky it was you who came along and not someone else. Amazing how you can really see how scared he was!

Oh, how great that you were able to free him. poor thing.

Phew! I was pretty sure you were gonna say he had rabies, because seeing a raccoon who doesn't run away, in the daytime, screams rabies...

And SO glad your hubby wore gloves! If either of you even got nipped in the tiniest of ways I would be SCREAMING at you to go get rabies shots immediately!!!

Now, with that over.

You two are awesome. Love you!

You were in the right place and the right time. And yes, it is a sad story even though it had a happy ending.

That story made me cry. I am so glad you chanced upon him and released him because, even if he did die, at least it was in the cold water but on land and, maybe, around others of his kind!

That is such a sweet post. I know raccoons can be vicious at times, but the look on this ones face just says it all. He looks like he could talk.

Awwww....I'm glad you were able to save him. The poor guy. I'm also glad no one was bitten in the process.

Oh that's not a bad story, Joan... You two are WONDERFUL people. You saved that little guy. People just don't think when they set out traps which could hurt other critters... That is what upsets me...

Thanks for saving that little raccoon...
Hugs,
Betsy

What a terrifying thing for him to go through. But good for you for helping him and thanks for telling his story and getting such good photos. Our cruelty as a species is astounding.

Someone is running a trap line and this guy was unlucky enough to get caught. In Minnesota it is illegal to touch anyone elses traps..we had a similar situation with a beaver last spring..sad. I am sure your Raccoon was going to be just fine especially since he swam away:)

This has got to be the best Christmas story ever!!! Thank you so much for all the help to gave this poor little creature. God bless you and this lucky little raccoon.
Hugs, Mistaya mom, Gail

Your pics said it all! Glad you were there to help. 'hugs from afar'

Great ending, they are very intelligent and probably was saying thank you. So glad you were there

I knew I always like you guys a lot. Now I love you! I have to admit I got a bit misty reading this, first with sadness, then because you and your husband are so giving, and then for the very lucky racoon! You guys have just racked up MAJOR karma points...You just made my day!!!

I just showed this post to my wife and asked me to thank you for her. She said you and your husband have kind hearts...

God Bless You. I am so thankful.

What a wonderful story Joan. That little raccoon is so lucky you and your husband came along when you did, I hope he will be okay. The look of sadness on his face almost broke my heart.

I really dislike traps like this, they are so cruel. I hope you disposed of the thing.

His home seems to be comfortable.
The back figure is pretty.

I have been wanting to read this one since the day you posted it, but my mind gave out on me so I had to rest for a few days. I'm sure the poor raccoon will be okay. And I'm also sure he was very glad you came along. It tears at me to see any animal in such a bad situation, but to see him freed is such a wonderful thing that my feelings can't be described.

Hi,
Flew in from Pat T's bog
This story and photos is so sweet
I gotta be honest though - I cried.