Maybe we ARE the Bird Hospital?

We got back from shopping on Saturday, and my husband called me to our sliding glass doors on our deck.

There on the deck floor was a Flicker, and he was hurt. We don't know if he hit our glass windows or what had happened, but his eyes were closing and he was breathing rapidly.

He was beautiful. He had a red cap on the back of his head and beautiful yellow tail feathers.

So, we held him and stimulated him every so many minutes by petting him so he would open his eyes and not lose consciousness. 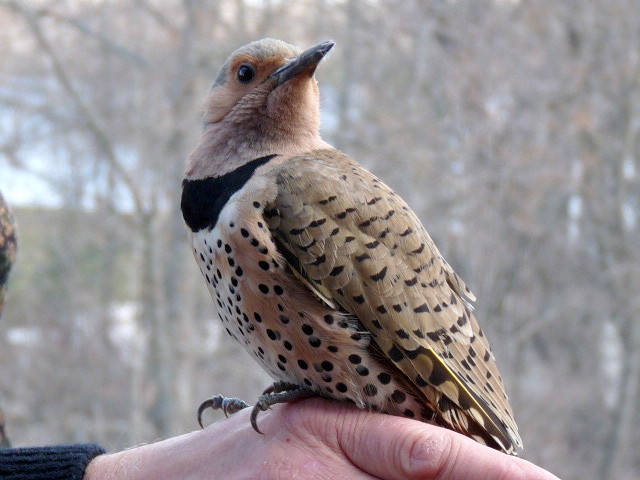 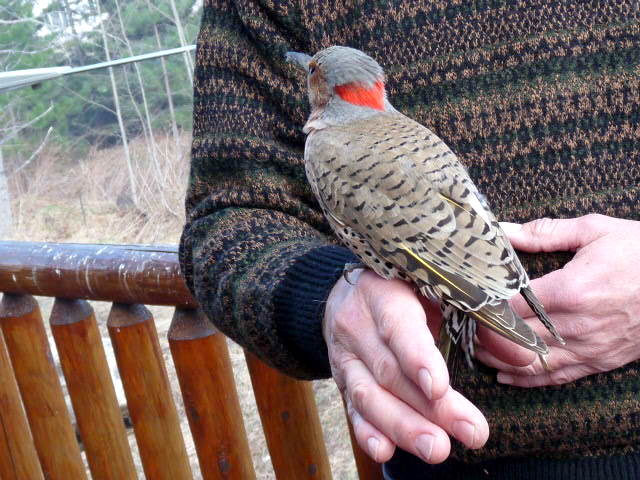 You can see in this photo, his left eye was closing and he did not look well: 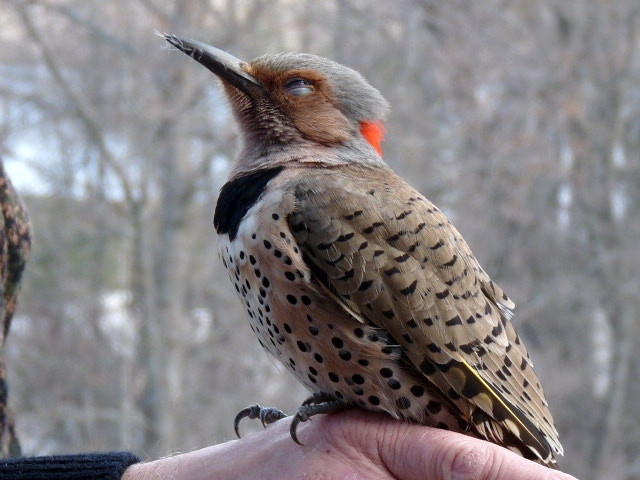 We put him on the deck floor for a while because he finally kept his eyes open for longer than a few minutes: 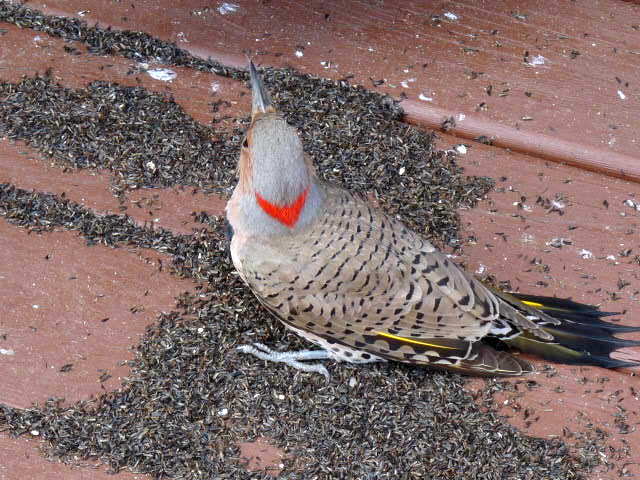 My husband picked him back up after about another twenty minutes, hoping he would fly away. He flew over to the screen and hung on, but still looked a little woozy. 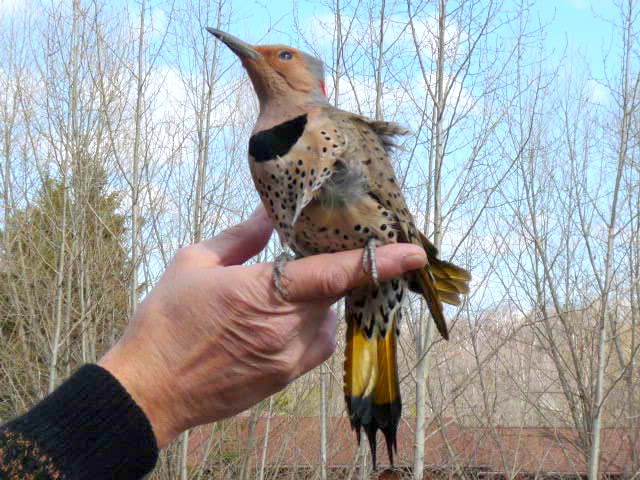 Look at his beautiful red cap!: 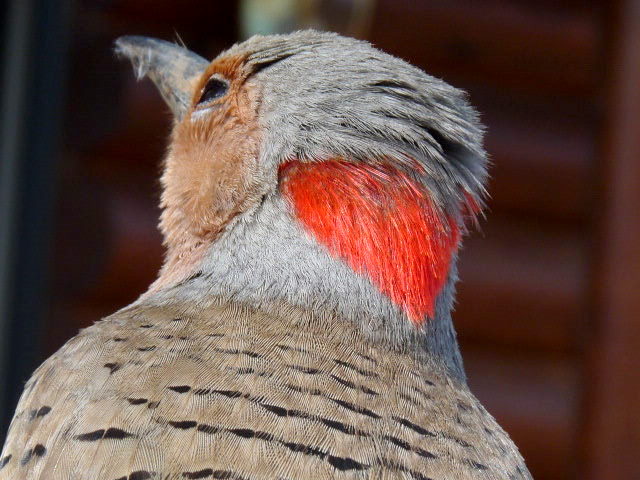 After stimulating him with more petting and making sure he stayed upright, he began to look a lot more awake. But he did not seem to want to fly away. 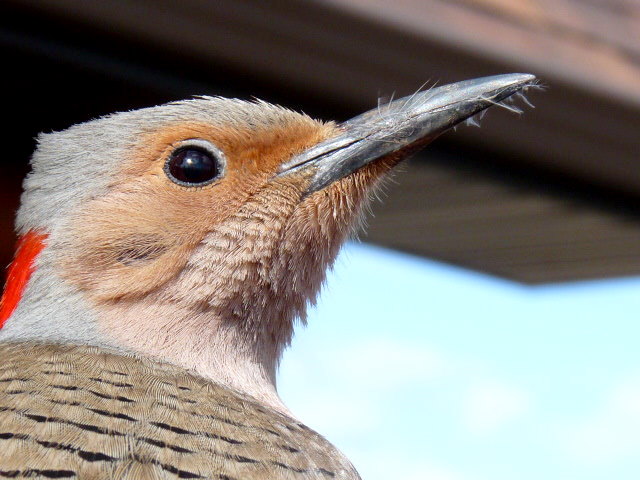 So, my husband decided to put him on a nearby tree limb and watch him a while to make sure he was okay. 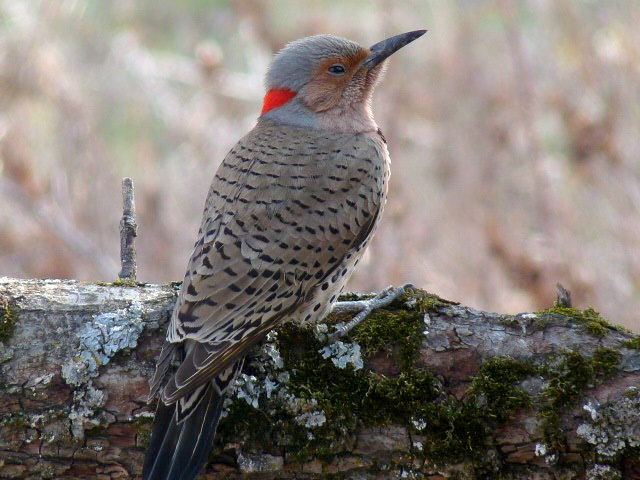 He began looking at his surroundings more and looked more awake. 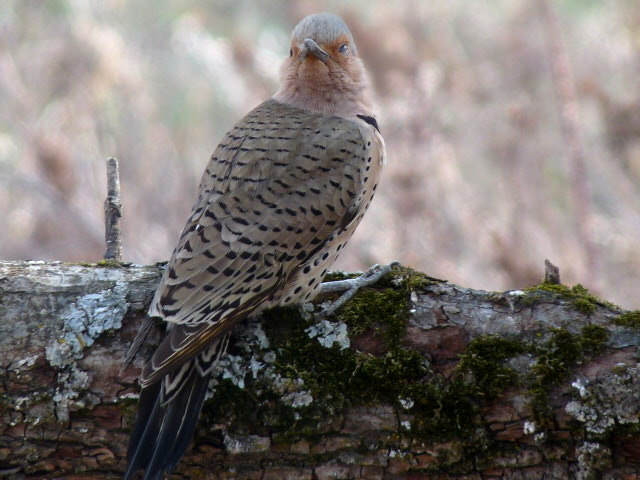 After about another half hour he looked about, and flew away!!
We had saved another beautiful bird.
Thank goodness! I was afraid we would lose this one~! 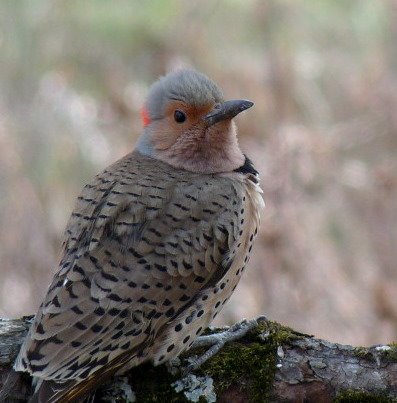 He is just beautiful! Don't think we have those in these parts, but thank you so much for saving him for all the world to enjoy.

Together We Save said...

wow. Very beautiful. He was lucky to find you.

Awwww, that is so nice.

And your bird pix are just awesome! I'm glad that you display them large.

wow! He actually let you touch him and perched on your arms!! He must have realized you were 'friends'!
That's a wonderful story...must have bumped into something and felt a bit woozy!! Did he come back to search for crumbs?!!

I haven't been reading your blog long. What kind of camera do you use? Fabulous photos of your little feathered friend!

How neat and what a beautiful bird. It was almost like he wanted to become your pet and stay there.

Those are AMAZING pictures! It's lucky the birds have you guys around!

Gaston: We have seen them from far away in the trees, but had no idea they were so colorful and beautiful up close and personal. I am so glad he is okay now.

Together we Save: Are you new to my blog? Have you joined on as a Follower? Welcome! Thanks so much!

Going Like Sixty: Thanks so much! He was so beautiful, even these pictures do not do him justice.

Roshni: Unfortunately, he had probably bumped into our large glass windows by accident. He is a woodpecker, so I think he eats bugs and worms...never have seen that kind of bird at our feeders, so this rare chance to see him up close was really neat.

Anonymous: Thanks! It is a Panasonic Lumix. For the model number, go back to some older posts of mine (about a week ago or so) and I listed the model number there. I love the camera, it is an 18X optical zoom, and has a somewhat automatic focus feature. If I can use it, believe me, any amateur can too!

Grannyann: I would love to have kept him, but I could never have caged such a beautiful bird.

JJ: They probably hate our big windows, which they bump into frequently, when the light is just right they don't see that they are windows!

It must have been the stimulation helped to revive him. We have had the same thing happen many times, most of the time they don't survive so he was one lucky bird!
Joy C.

You may put up a tape or a label like those found on the glass door in shopping centre.
The birds will be alerted by then.
Am I right?

I just loved this post. Thank you for it!

he is beautiful! Good save! Have you tried hanging anything out on the windows..up here some people use those aluminum pie tins on suction cups on the outside of the windows. I have lots of pretty stuff hanging in mine..stained glass etc..and it seems to help:)

Oh what a wonderful thing to do, save a bird. He probably knocked himself out when he hit your glass door. I am so glad you arrived home in time. I love a happy ending.....:-)Hugs

How pretty. You seem to have a way with inured birds. That's wonderful.

I love happy endings. This beautiful bird deserved to live. It's good that it had you to help revive it.

I didn't know a flicker was such a big bird.

Joycee: He was lucky, and so were we, to be able to have such a close encounter with him.

Rainfield: Perhaps you are right, but some of my windows are so high, I don't have a ladder tall enough to reach them.

Sharon: I am so glad you enjoyed it. We sure enjoyed seeing him up close. I never knew they had such magnificent colors!

Far side: I probably should hang stuff up on them...but I end up taking so many pictures of the birds at the feeders through my windows, I wouldn't be able to do that if I hung stuff in the way.

Bernie: yes, we were so happy to have gotten to him quickly!

Loree: We have been very lucky in saving them, thank goodness!

Granny: Are you new to my blog? I have a grannyann and not sure if you are her? Anyway, if you are, welcome aboard! Join on as a Follower if you haven't yet! And thanks for the compliment on my photos. I loved taking them.

Ratty: So sorry you couldn't have a happy ending with your snake post. But nature has to be nature, right? We were so surprised to see how big a flicker was and how colorful!!!

So glad that he was okay! you got some fabulous photos!! I've had to put window decals up at the cabin because of all the birdy strikes - so far so good!

First, that is so cool I have no funny words.

Second, I am more than jealous of your camera now.

Third, I hope you washed your hands after all that.

Aren't they incredible birds? Your pictures are gorgeous! So glad you changed your template. It was definitely worth it : )

Glad the Flicker was okay. It's left eye still seemed a little funky but hopefully it made a full recovery. Don't I hate it when birds hit our picture window. It breaks my heart.

Wow, he is amazing! I love your pictures of him! That is so neat. I am glad he flew off and is doing better. Seems you have quite a magnet going on around your porch!

Shellmo: I may have to resort to decals..but I take a lot of my bird pictures through the windows, and I hate to block them with decals because of that.

Kearsie: Thanks! I did wash my hands plenty after that. Didn't want to catch the BIRD (or swine) flu! yuk, yuk!

New England: He was AWESOME. I had no idea Flickers were so big and so colorful! Thanks again for helping me change my layout to better show him! His eye remained funky until the last half hour. We heard him pounding on a tree right after, so we knew he was okay. (although maybe he had quite a headache!) :-D

DVM: Yes, but unfortunately, the magnet is my honking large windows! Hope no more birds meet their fate there.

Those pictures are absolutely stunning. I am so glad you did that for him and he eventually flew off. I don't think I've seen a bird that beautiful before. Don't see many wood peckers in my neck of the woods- southampton, UK.

Bemused: Isn't that just the neatest bird? I was so amazed by his colors! I am so glad you are following me...did you go on "Followers" and click on it to officially become one? Thanks so much!!!

Thank you for leading me to this post. I am so happy that your Flicker lived. I have so many birds hitting my windows all the time. I always worry about them. But so far they have all flew away okay. This flicker looks like a young one. They are beautiful birds and I very seldom get to photograph them. I am always happy to see them. You sure got great close ups of him!! And to actually be able to pet one! Wow! Their beaks could do a job I bet. But he was grateful that you saved him..Ha!

Ginnymo: so glad you found this post and photos! I never would have known about this bird or realized how beautiful they are unless he injured himself...we looked him up on a website about birds and were so glad we saved him. They are amazing!