Here are some more Useless Facts and Trivia for your enjoyment!: 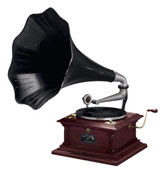 2. The first product Motorola developed was a record player for automobiles. At that time the most known player on the market was the Victrola, so they called themselves Motorola. (I bet the records got a lot of skips in it from the bumps in the road!)

3. Roses MAY be red, but violets ARE, indeed, violet. 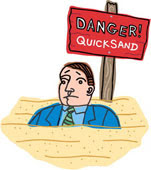 4. By raising your legs slowly and lying on your back, you can't sink in quicksand. One should carry a stout pole while travelling in quicksand country...when placed under one's back, it helps one to float out of the quicksand. (Remember this the next time you plan your vacation there!)

5. Casey Kasem is the voice of Shaggy on Scooby-Doo.

6. Celery has negative calories! It takes more calories to digest a piece of celery than the celery has in it to begin with. (Mmm, diet food.) (Too bad it tastes like celery!)

8. In Gulliver's Travels Jonathan Swift described the two moons of Mars, Phobos and Deimos, giving their exact size and speeds of rotation. He did this more than one hundred years before either moon was discovered.

9. Chewing gum while peeling onions will keep you from crying! (Double your pleasure, double your fun!) 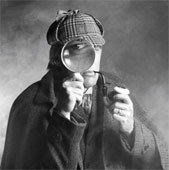 Sherlock Holmes never existed in the first place. But the address where he supposedly lived, 221B Baker Street, still gets a lot of fan mail. I am told that there is a desk there that has the sign "Secretary to Mr. Holmes".

I like these! Glad to know #9 - I'm always bawling my eyes out when I peel onions!!

Now if someone would just play trivia with me, I have all these new items to answer.

WOW, I am glad I went to University as there was only one of your facts I actually knew. It's fun to learn new things, thank you for sharing my friend.....:-) Hugs

Charlie Chaplin is an interesting guy... I mean, who possesses the thought process "Hey look! A me look alike contest! I think I'll enter!" I'd be more like, "Sweet... people actually care if they look like me."

Ah, if only celery tasted like chocolate. I would be eating it all day and would get rid of so many calories.

Why, oh why, can't chocolate have negative calories? Wait a second...celery dipped in chocolate! Bingo!

I have to disagree with you about Sherlock Holmes - of course he existed in the pages of Conan Doyle's novels!

1. Does William Shatner get royalties for his face being responsible for scaring the crap out of people then?

2. Victrola makes me think of that Donna Summer song, "Dim All the Lights"...good song...

4. By not stepping on quicksand, you won't SINK in quicksand! Yeah, I just thought of that...

6. NEGATIVE calories? Bring on the celery!!

7. Maybe he forgot to wear his mustache?

Shellmo: Me too. I haven't tried it yet either.

Grannyann: You can use it at your next party as a conversation starter. ha

Bernie: you are welcome. The only one I knew was the celery one, being a lifelong dieter off and on.

Scrappy: Funny he didn't talk about the Number One Hit during Scooby doo.

VaBookworm: yes,how did he know that? It fits my alien theories exactly. Charlie may have had "issues" about his identity? It is strange that he entered the contest. I would be afraid to see who entered (and what they looked like?)

Loree: That would be great!

Lynn: Now that is a great idea! Try it and let me know how it goes?

Ladyfi: Yes, I loved those novels. All the characters in the books I read are real to me too.
Are you new to my blog? Did you join on as a Follower? If not, please do! It will be great to have you aboard and commenting.

Insanity:
1. I know he scares me on those Priceline ads!
2. I love that song too...but I doubt if any disco blasted out of any Victrola (ever!) ha
3. You can always just go to your dirty limiricks then. I know you have some!
4. Remember to bring your rod. (Thank goodness you aren't a man. That suddenly sounded dirty).
5. I am impressed. I didn't know you were intimate with Scooby Doo
6. Read Lynn's idea about dipping it in chocolate!
7. Maybe a postmenopausal woman was his biggest competitor?
8. Or Aliens who are here on earth giving us information to help our society. That's my theory and I'm sticking to it. It's always about the Aliens.
9. Give you gas and bad breath.
10. If he is, I would appreciate him picking up the dustballs and emptying my garbage there. Elementary!

I am going to eat more celery!! I wish it tasted better though:)

Sara: Don't forget to dip it in chocolate! :-D

I knew them all except the one about Jonathan Swift. That was the one I would have expected to know, because it was about an astronomy subject. I'm backwards. :)

Ratty: Well, you little Smarty Pants you! I am impressed!

Thank you for the how to save your life if you fall in quicksand tip. I've always had a fear of this after watching too many jungle movies as a child (Tarzan I think) where the bad guys would fall in quicksand and quickly sink leaving just their pith helmet floating around. Now I know what to do, not that I'm going to the jungle anytime soon and not that I have ever seen quicksand in my life. But, good to know.

Geelizzie: Funny! Now you will be prepared (Like a Girl Scout!) ha If you haven't joined on as a Follower yet, go up to "follow this blog" and click on it!