Hi everyone!
I didn't post for a few days because I was downstate in Lansing Michigan for my neice's bridal shower since last Friday.

While there, we went to Michigan State University's campus to visit their botanical garden and take some photos.

When we got there, the Red Cedar River was high with a fast current. The campus was beautiful with the leaves just coming out.

As we approached the river, something caught my eye. There were two people in the river having fun and alot of people were watching. When I approached, at first we saw this kayaker: 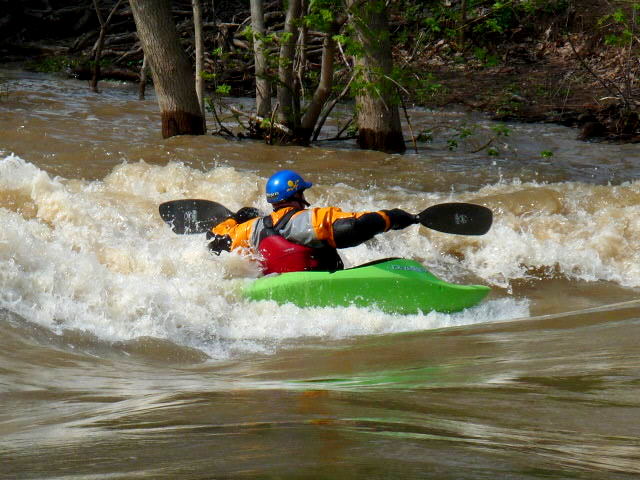 He really had to fight the rapids and looked like he was having a blast. But then I looked again a few seconds later and I thought, now this CANNOT be what I think it is.....

But, I looked closer and sure enough...there he was! A guy was SURFING this river!: 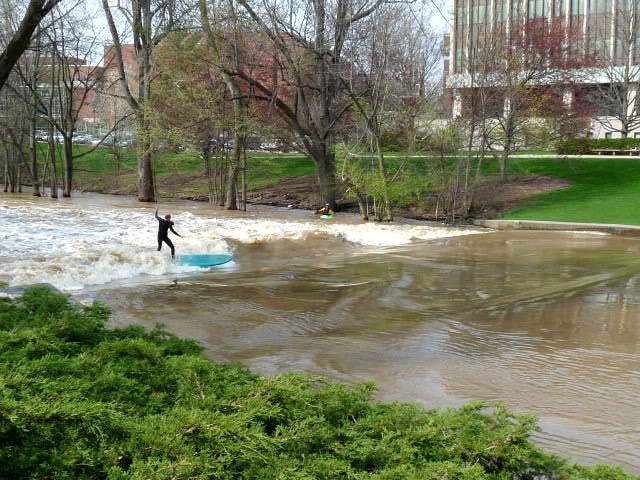 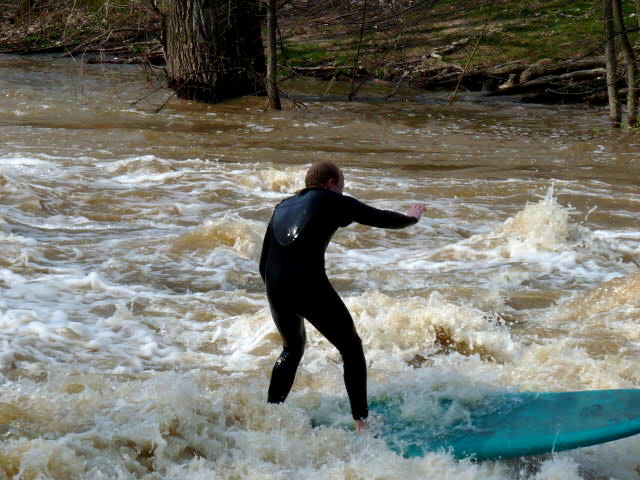 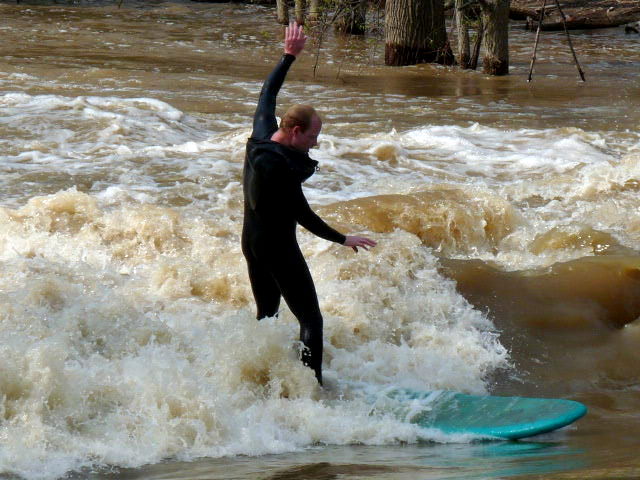 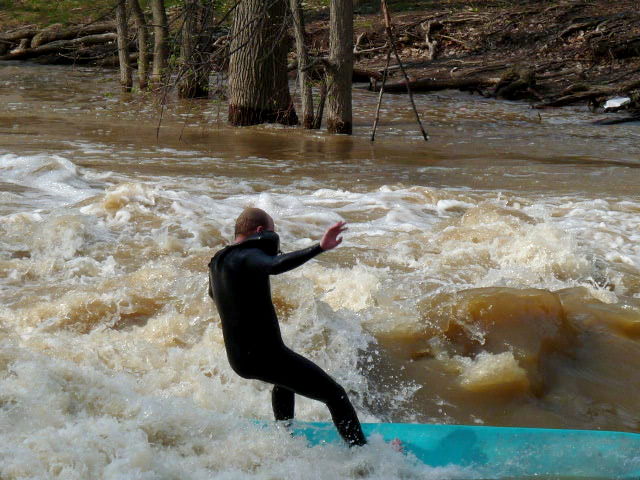 Too funny.
They both entertained the spring crowd for quite a while and I saw other people snapping pictures too. It was a gorgeous spring day (in the 80's!!).
Later this week, I will post photos of the flowers and mallard ducks I saw while walking the campus too.
Posted by The Retired One at 2:27 PM

That was some extreme kayaking! Mine consists of smooth calm lakes in the morning and I'm the only one making the ripples! LOL! And how funny about that surfer too! neat photos!
P.S. How long does it take you to get to Lansing from your home?

Shellmo: It takes about 8 hours...we stop to catch lunch usually at the bridge,and again once or twice for gas or potty breaks! We used to rush, but now that we are retired, we take our time and look at rummage sales or whatever catches our fancy! ha

Yikes! That water had to be FREEZING. Michiganders are tough!

I have to say, you sure know how to find the great pictures. Do you know how unusual it is to find these opportunities to take such interesting photos. Thanks for sharing. Only you.

That is hilarious! I will have to share this with my MSU alumni husband.
I bet you enjoyed seeing all the green grass and flowers down there hey?

That's an awesome picture of the kayaker! I've seen plenty of surfing but never on a river. Too funny!

I couls so do all that if I had a younger body
:-}
Scrappy Doo

Hey! You've hit 100! In England, that means you would get a letter from the Queen. Or ... or ... perhaps that's just birthdays, not followers. Sorry to disappoint.

Sounds like ya had a good time! I wondered where you were! Looking forward to the other shots...and no more talk about temps down there.

I didn't even think anyone would be able to develop this skill of surfing around here, much less be able to find a place to do it. Good stuff.

HAHHAHA! That was awesome!

Take good care of yourself ok? I know you're a nurse and you are married to Super Husband so, I expect the best care!!! I have like 5 posts up you can read if you get bored. Miss ya get better soon!!!

Fantastic idea to get maximum fun. First time to see surfing the river. He must be creative enough!!

I wrote about windsurfers and kayakers yesterday too! Awesome pics!

Those are great shots!

Loved your pictures, something I have always wanted to try......you mean I have been commenting on your blog and you haven't even been there))))) I think your blog is wonderful, have a wonderful day.....:-) Hugs

Oh wow, I have never seen anyone surf a river!

Lesley: I said the same thing to my brother about the water being freezing...as you can see they have wet suits on...but even then....brrrr!

Carol: I was lucky to be at the right place, right time. ha I couldn't believe it. We just got there and walked to the river and there they were!

DVM's Wife: Yes, it was wonderful. It was like leaving winter (here) and arriving at summer there. Where was spring? (Probably drove through it somwhere on I-75 around Gaylord). ha

JJ: I could have watched them for hours. We toured the whole botanical garden, walked around and when we headed back to the car, they were still at it! They must have been exhausted.

Scrappy Do: I could never do either, even with a younger body!

Fran: I know. I was SO excited!! I was away from home checking my blog from my neice's laptop and got so excited!!! I should have offered a prize to the 100th follower, but it happened when I was gone and didn't have daily access to check it!!

Cathy: I have lots of back reading to do of everyone's blog. My neice had a laptop, but we were busy and lots of people used it during my stay, so I didn't have the time to do it. As a side note, I got sicker every day and went to the clinic when I got back and found out I have pneumonia. So I am still hacking and on medication. Sure will be glad when I am back to normal!

Ratty: Now you can always go to your preserve and when there is a current, start practicing!!! It will entertain the squirrels and deer!

Insanity Kim: I am slowly getting caught up on my blog reading of everyone's blog. I have been hacking up a few lungs around here...hope the antibiotics kick in soon, and that I don't get swine flu on top of the pneumonia.!!

Rainfield61: I bet it was fun for them. They sure looked as if they enjoyed it and the attention they were getting!

Joanie: I have to get caught up on everyone's posts...couldn't read much when I was out of town.

Gaston: Thanks! I love any moving water shots, so this was a bonus to get the kayaker and surfer too!

Pehpot: They must have to endure how cold it must have been for them!

Bernie: I did answer your comments...and some of the others...but there were several family members and only one laptop to share. ha I have a lot of reading to do to get caught up on reading everyone else's blogs too! Thanks. I hope to post some more Lansing pictures over the next few days, too!

Loree: Me neither. It was fascinating. He would do the rapids, fall over, go back up river, climb back on the board and do it over and over. He just have been exhausted!!! (or on a suicide mission) ha

Hmm. Perhaps I will surf in my swimming pool. I'm glad to hear that Spring is finally catching on up there!

Lynn: Oh, that is NOT where I live. MSU is way south of us. We are much colder! But the snow has finally melted. No flowers or green leaves up here yet, though~!!

Your photo inspired me to go out in the back yard and start getting my kayak ready for the first Spring run...but mine will be a lot calmer than that!