After 36+ years of marriage, you'd think I'd know better.
You'd think I wouldn't be tempted.
But, I need to tell you that I carressed another yesterday.
In fact, I have spent a LOT of time alone with him this winter.
He just makes me feel happy. Lighter in mood.
He makes me look forward to summer and happier days.
He had such smooth thighs, such tight glutes.
Firm biceps.
He is much shorter than the type you'd think I would go for. In fact, even I was surprised at my sick attraction to him.
Ever since I saw him, I couldn't stop thinking about him.

He was so damned cute.
I couldn't resist him.
Oh, I tried...
You'd think I would have stayed away from him.
After all, my neighbor had him first. (He was her weakness for many years.)
But, last summer, she got rid of him. Just like that.
I was kind of shocked.
I even asked her why. She heartlessly said she thought he was getting a little old, a little "rough around the edges". She said she "no longer had a use" for him. How heartless is that?
He was so vulnerable. I couldn't resist a broken heart.
That is the problem with us women, no? We all think we can "fix them".
The really sick (and shameful) part of this, is that my husband helped me pick him up.
Even sicker?: in many ways, it was my HUSBAND that helped me "fix him".
I know.
I am shamed.
But, after spending all winter hiding him and hiding this, I feel I HAD to confess this. Because us bloggers understand that all of our secrets are safe.
I feel much better. The guilt was really weighing me down.
Here is a picture of him, so that you see how irrestable he really is.

So you can understand why I would do such a thing:

This is my new love. My garden frog. 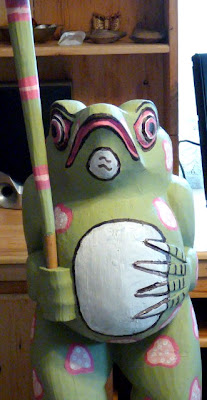 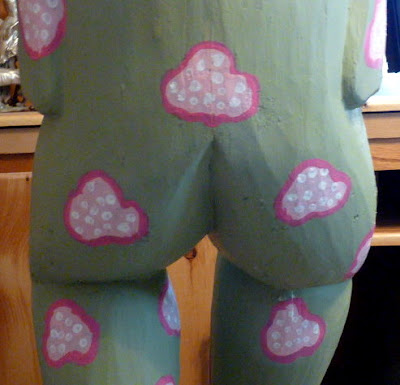 Look at his dashing profile!

My neighbor had him in her beautiful garden for years, but he got a split in his wood and became worn and faded. She had a rummage sale a few years ago and there he was: for SALE!! I had to have him! So, we hauled him home and my husband put wood filler in, we sanded him and repainted him the way he originally was. Now he is as good as new!!

So readers, what should I NAME HIM???

As soon as the snow melts and I spruce up my garden, he will be there, so I need a name for my shameless obsession!!!

Email ThisBlogThis!Share to TwitterShare to FacebookShare to Pinterest
Labels: blog about a confession, shameful confession

I am SO SO SO Happy this didn't end with a picture of Ed Cullen! This is SO the rock-hard prince I would expect you to be manhandling! :)

But, just to appease all those sparkly moms out there (not me) I think you should name him Edward.

I love frogs. Their legs are scrumptious!

I may not be able to provide a good name, but your second love just looks like the cartoon icon called Ninja Turtle.

Oh my my. LOL...pretty good post, you had me speed reading just so I could find out exactly who (or what) the "Another" was.

Insanity Kim: I would put Edward on the list to vote for, but can't do that one! (My Dad's name was Edward!). You will have to give me another one! Maybe Cullen? And don't be nibbling on my Love's legs..stay away, you hussy!

Rainfield: I can put Ninja on the list for the vote. Is that your final answer?

Dreamwalker: Ok, Dreamwalker: you didn't suggest a name for the vote, so now you have to write back and give me an idea for his name!!

Call him Prince. It's obvious.

Love the buttocks. I'd be holding on tight to him too.

I never knew frogs could have butts like that! Lol! Love him - he's so unique! I would call him Prince Albert!

Fran: Prince will officially go on the list of choices for the vote!

Mary: I'd love to put Buttocks as a name choice, but I think I will pass on that one! Got any other name ideas?

Lol I totally thought you were talking about Edward thats funny I also was speed reading so I could find out who it was. I think you should name him Mr. Wigglesworth don't ask me why the name just popped into my head when I saw him love the frog :)

Shellmo: Prince Albert will go on the list for vote!

Ramblings: Mr. Wigglesworth will also go on the list for vote!

I want Bruce. LOL for his bruised muscles?LOL

oh my for one I thought you were talking about your hubby and even thought that uh oh, her hubby was an ex bf of her neighbor LOL I really love your humor :)

Hapy was the Egyptian god responsible for the flood of the Nile... and he was symbolized with frogs.

Willoughby because that scum was a bit of a toad in Sense and Sensibility :o)

Feel free to ignore all my suggestions... I'm just at the point where I'll do anything to avoid studying

After I saw his picture, I understood your passion for him. You should let me borrow him, just like with the dragon. Or you could just keep him all to yourself, and name him Prince Freddie Frog.

Insanity Kim: Ok, it is official. Frogbob Buffpants Gnometoad Xavier III is on the list for vote.
(FBGX III for short?)

VaBookworm: I will add Hapy, Mowgli and Willoughby to the list for vote!

Ratty: Prince Freddie Frog will be added to the list for vote.
(No, you can't have him!, I am still in the honeymoon phase with him. Ask me again when I get the Seven Year Itch). ha

JJ: Sir Tight Buns will be added to the list of names for vote. But don't be too quick to judge his looks. A lot of frogs are really just disguised, hot Princes!

Brittany: The name Brad will added to the list, even though its the Pitts. :-)

I think you should name him Woody! Great post..I so enjoyed it LOL..sometimes it takes so little to excite us older women:)

That quite the Frog ya got there! Those do look like buns of steel.

Here is my suggestion Fred Fred the frog boring yet a tried and true name.
Scrappy

I suggest "Fergie Frog". Do you know they used to have a frog museum in Eureka Springs Arkansas, probably still there. I could never even imagine so many frogs doing so many things as they have in that museum. My friend and I laughed till our sides hurt.

Far Side: Woody will be added to the list for vote!

Melissa: Ferdinand will also be added as a choice for vote!

Scrappy: Fred will be added, and maybe even Scrappy! ha

GrannyAnn: Fergie Frog will also be added to the vote ballot! That museum sounds like a riot! Did you hop when you toured it?

I am coveting the frog!

I love that frog. He has so much charm! I need something like that for our garden. My little one has 2 frog soft tyos. One's called Freddie and the other one is Ribbit.

Manical: You can come and feel his glutes whenever you want to!

Loree: I will put Freddie and Ribbit on the list of names up for vote!