I opened our paper yesterday and here is the ACTUAL, REAL picture I see: 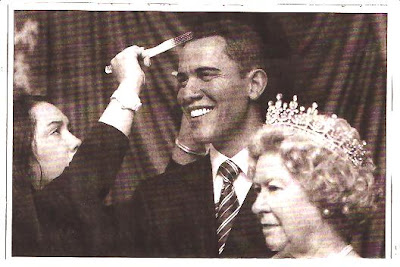 And, I immediately think:

OMG, WHAT is the OCTO-MOM doing combing President Obama's hair???? And, why is the Queen there??????

Then I read the caption under the photo: 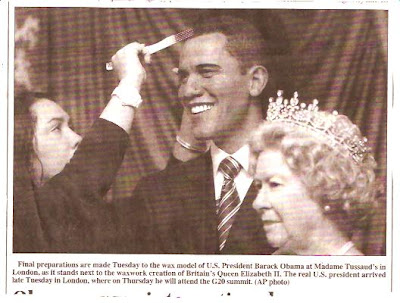 For those that can't read the small print, it says:

"Final preparations are made Tuesday to the wax model of U.S. President Barack Obama at Madame Tussand's in London, as it stands next to the waxwork creation of Britain's Queen Elizabeth II. The real U.S. president arrived late Tuesday in London, where on Thursday he will attend the G20 summit.(AP Photo).

But, doesn't the lady holding the hair pick look like the Octo-mom???

I don't care what anyone says. I just KNOW it is her!!!

(She needed an extra job, you know....now that she has all those babies!)

Email ThisBlogThis!Share to TwitterShare to FacebookShare to Pinterest
Labels: funny blog about picture of the President in the paper

If I had that many kids, I'd work two jobs, and NOT for the money, but for the peace and quiet! I love the new widgets... You know, I actually used to own that Felix the Cat clock... true story.

I thought the same thing. What was he having his hair fixed while standing next to the Queen!!!

You mean Octo-mom got a job? Can't be... it's a lie! There's NO way she's ever going to be able to hold down a real job, she's waaaaay too far off in La-La land for that!

Aria: I would LOVE to have a real clock like that! I remembered a relative having one when I was a kid and loved it then too!
Yes, if I had that many kids, I would PAY THEM for a job somewhere else. But, of course neither of us would be that NUTS to have as many kids as she did. Gheeh!

Grannyann: Yes, it is a funny photo. I thought for sure it was Sulamon (I think that is how to spell the OctoMom's name!)

Yeah, I'm: You are CORRRRR-REEEECT! God, how'd you like to be HER boss??? She'd work for 2 weeks and be off again on maternity leave. ha

At first I thought it was a pic of octomon painting the gray out of the O-man's hair for his papped pic with the Queen just before their soccer game...??

Glad you caught this and brought it to light; had I found it on my own I think I would have thought I was still being affected by my meds!

Woah...you should do a "caption of the day" post with pix like these (drooling over the idea reading what you would write).

Am I babbling today? I feel like I'm babbling...

I am so sick of Octomom! She's on the news here...every...damn...day. If they'd just ignore her, we'd all be a LOT better off. Except for the babies. I feel for those kids!

Insanity Kim: LMAO. Now THAT is an idea..(me making my own captions from pictures I see)...if I find anymore I just might do that. Thanks for the idea, funny one! (I mean Babbs).

JJ: I KNOW! I feel the same way. Maybe that is why the photo stood out to me. The OctoMOM has been in the news so much, my brain thought it WAS her!

Brittany: It does look kinda creepy. And I just KNOW they will end up doing a wax one of OctoMOM too. Just wait and see. And then, they will run out of wax, because they will have to do ones of ALL of her kids, too...

Good thing Octo-Mom has a job! And does Michelle know Barack's seeing the Queen Mum on the side?!
Pearl

Pearl: That Queen is pretty sexy, so Michelle has to keep an eye on him, and now that OctoMom has her eye on him (or at least his hair!),Michelle needs to keep her eyes on BOTH of them!

WHERE'S THE IPOD?? They should have put an IPOD in the museum too!

Say, Retired One, I just had a thought...since Obama was so original in his choice of gift to the Queen, when it is OUR turn, we'll take her a couple of pasties!

It looks like her! But from what I've heard on TMZ - she spends a lot of time shopping and neglecting her kids - lol!

Cathy: Man, it is going to get pretty crowded in there. And, depending on where we get the pasties from, if they have enough lard in the crust, they won't need to use wax. HA
(For those of you that don't know what the heck I am talking about: PASTIES (pronounced PAST-TEES) are not the dangling things on strippers boobs. Pasties are a Cornish dish like a meat pie. It has a crust on the outside and potatoes, meat and carrots or rutabaga on the inside. They are a local U.P. of Michigan (and north Wisconsin and in parts of Minnesota too) meal!!!

Yes, it does look like the octo-mom. Maybe it is her. lol. I love wax museums. There is a great one in New Orleans. Thanks for stopping by my place.

that's the octomom! she is not there for the job, she is hoping to hook on new donors for her coming kids, I heard she's planning on a new title, decamom LMAO.. ten kids? can you imagine that LOL

oh by the way, I don't have much photos of the tourist attractions I posted, my second born son crashed our PC last year and all our photos in Baguio were deleted. This coming weekend, we're going there! Watch out for the great photo flood lol

I don't think I've ever seen the OCTO-MOM before. I keep myself intentionally uninformed. I did think the picture looked kind of weird though. After you explained what it was, I noticed that it was because Obama's teeth looked fake.

That's a funny pic. Those wax figures are so lifelike...I troo was w ondering why Obama was having his hair brushed next to the queen. It did not seem polite somehow...

Judy: You are welcome! I love stopping by other's blogs and chatting! Hope you stop by often here too.

Pehpot: I will look forward to your tourist pictures on your blog.

Ratty: How could you NOT see the Octomom before? Lord, she has flooded the news everywhere. You are lucky if you avoided it!

Loree: Not proper! Not proper! And, Lord Forbid if the wax figure had the President "touching" the Queen. (The news recently made SUCH a stupid fuss about the First Lady touching the Queen's back). Like, who cares????

Amazing what they can do with wax!

No, that's definitely a Botox application going on there, and she's going to start on the Queen next so that she looks like she does on our stamps.

Maniacal: yes! I just hope they never make one of the OCTOMOM. ha

Fran: That is an idea! ha

It does look like Octo Mom..she is so strange. What is with BO's teeth? Funny looking..for sure uffda:)
Yes, I have had pasties the kind you eat..they are OK a couple of times a year!