As promised, here are the pictures of the Mallards that were swimming around the Cedar River at Michigan State University:

These two males were cruising for "chicks" on campus, I am sure!
He is saying: "Be subtle, Mack ...but slowly check out the babe downstream!": 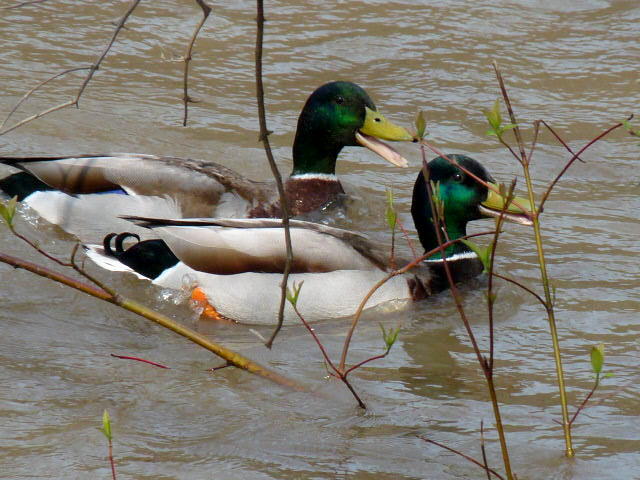 But, the other males overheard him. They swam up to check out the action, too: 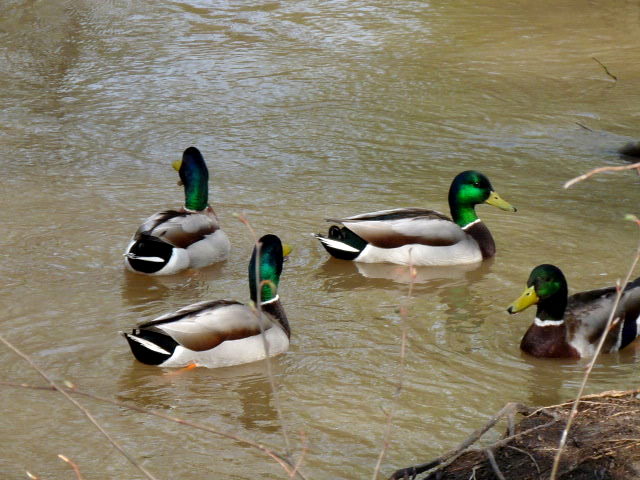 But they swam faster to her and got there first. Mack pretended he was just picking lint off his suit so that she didn't catch on that he was really flirting with her. During this shot, I heard Mack mumble to himself: "I think I am looking subtle. Ummm. I wonder if she is free Friday night to go for a swim?": Mack gave the other guys the "guy signal" to leave the two of them alone so he could ask her out: 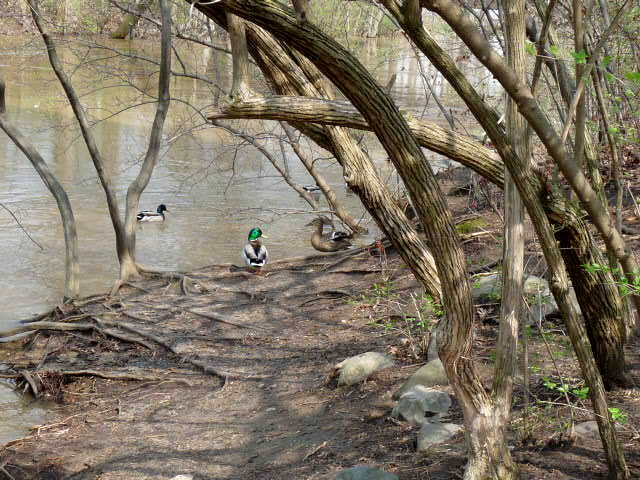 But, his buddy stayed just close enough to see how Mack did with his proposal. He figured he would waddle right in and try if Mack was unsuccessful in his flirting attempts: 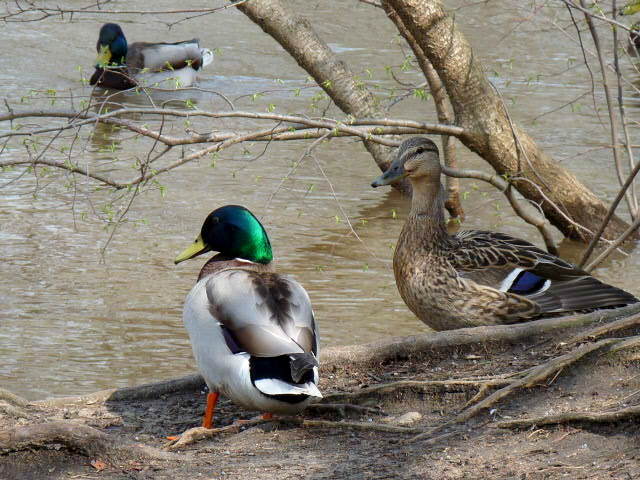 Dang it anyway, both Mack and his buddy were ignored. They swam away, briefly depressed, but still on the look out for another chick: 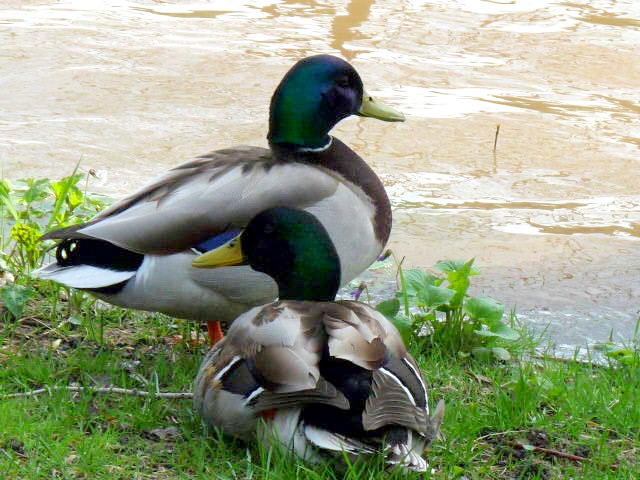 But, Mack wanted a drink from being shot down first. He ordered a double: 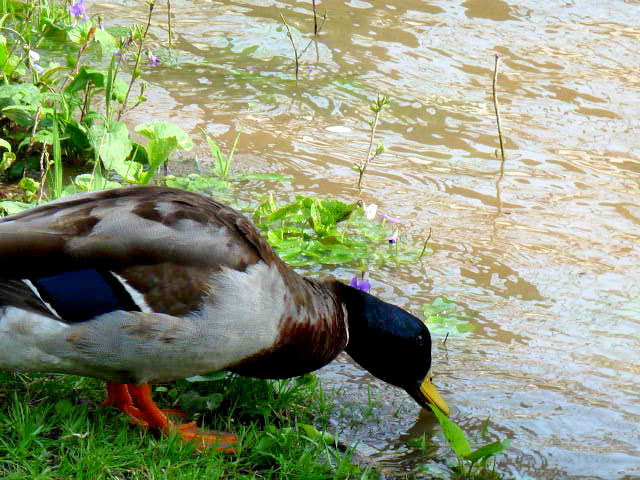 And, he was off to find another chick. "There are plenty of chicks in the river!", I heard him quacking as he headed downstream: 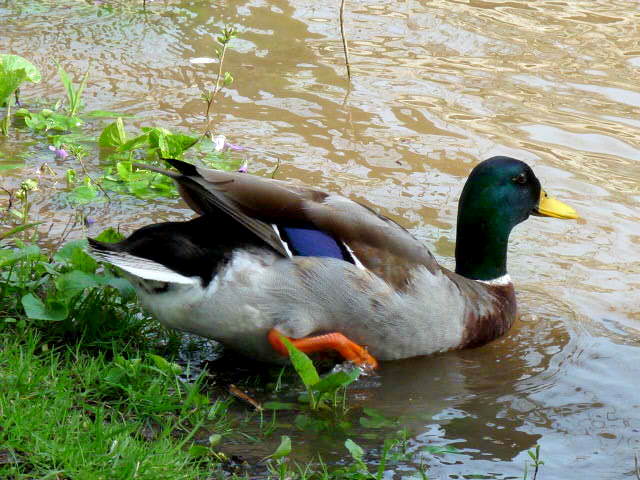 This was so cute !! Love me some duckees
Scrappy

Fantastic photos! The color is so vibrant; what kind of camera do you use?

The subtle mating of ducks:
That one duck was like, dude I'll say Quack: Hey hot mama, you come to these waters often? and then you can be like Quack: "this guy is the coolest guy in this stream" and then she'll be like Quack: OMG you're so cute I love your tail feathers and then I'll be all Quack: So whatcha doing right now? and then you can be all Quack: I've gotta skeedaddle and leave you two lovebirds alone and then I'll be all Quack: Let's go stick our butts in the air and heads in the water over here and get fresh. Ok?

If this is retirement...then i want one too...this is so much fun :))..things i have always wanted to do...but a working mom always has to make choices and priorties :(

Scrappy: I love to watch them,too!

Steve: Thanks! They are so beautiful in color...one of my favorite subjects to photograph!

Gaston: It is a Panasonic Lumix. For the model number, go to my older posts,about 4 or 5 back where I posted the second set of snowstorm photos...at the end of the post, I blogged the model number because I had a lot of readers ask.

Kearsie: Cute dialog. Maybe we could write a children's book together? Now THAT would be a blast!!!

I am LOL because my last name is Mack!

Fantastic shots Joan! The green on their collar/heads really pops... that God is one heckuva colorist, isn't (s)he? ;-)

Great photos, and I love the story! I think Mack's buddy was hanging around too much. He ruined it for him.

I love how clear your pix are (pining for your camera!)

George Washington and Zelda are doing fine as well; they represent the settled, happily married mallards...loved seeing the "single" side of it all! hahaha!

Gorgeous photos. I love ducks with their wonderful colours and those flippy-floppy feet.

Perhaps you're getting clucky too Retired One!
Age is no barrier to feeling alive ...

Lol! This as such a cute duck story! I swear in that first photo - both those ducks are smiling!!
Looks like the mallards need some more chicks around...

Aria: Thanks! She sure is a wonderful colorist! ha

Roshni: Thanks! I loved seeing those wonderful birds.

Ratty: Yes, his buddy might have wanted a little chick action of his own!

Insanity Kim: Me thinks all those colorful males were just play-yahs.

June: Clucky, huh? I am getting older, but I am not dead yet. ha

Shellmo: I thought they looked like they were smiling, too!! But if I was as beautiful as they are, I would be smiling all the time too! ha

You are so funny and you do take beautiful pictures. I read my blogs when I come to bed and I am so glad I have found yours, it always makes me smile or I see something so lovely that I always go to sleep with happy thoughts. You really have a way with words and a gift for photography.....thank you for sharing.....:-) Bernie

WHat gorgeous colours those mallards have. Cute story too :)

So funny! I'm always wondering what those ducks are really saying.
Great little story.
Such is life on a college campus!

Bernie: Thanks so much for the lovely compliment!

Loree: Their feathers look irredescent (spelling?) when you see them in person.

DVM: On a college campus, there is always love all about. ha

I knew I had a kinship with you...I have voices in my head too! Cute post and great pictures! Come take the lipstick test at grannymountain...
joy c.

I loved the close ups of those geese. What a cute story also. Gave me a smile to start the day.

Joycee: What voices? hahaaaa I will visit your blog today for sure!

Grannyann: Glad I made you smile.

Gotta love the ducks. And the boys are so handsome.

Great photos of the Mallards! great story too! :)