When we got to Florida, one of the things we did first was check out the neighborhood and then we went to John's Pass. It is a shopping/tourist area located on one of the causeways and ocean. It is the home of the famous Bubba Gump's restaurant which features seafood and (of course!) shrimp! 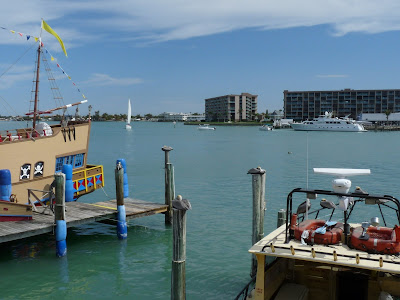 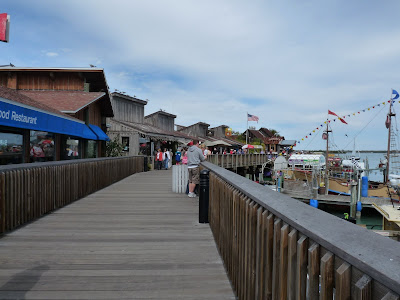 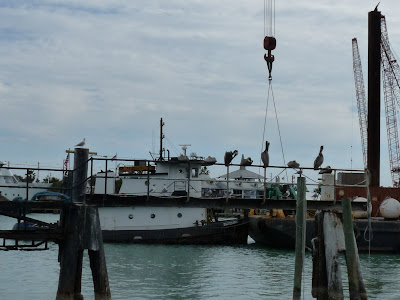 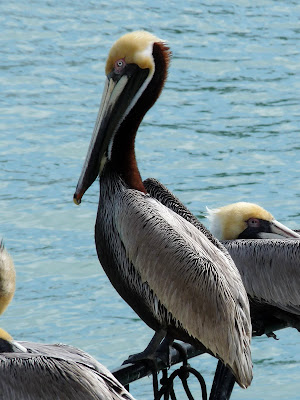 It is full of shops and you can catch deep-sea fishing charters there and of course take their famous "pirate cruises". Everything is geared toward the pirate theme. You can get pirate anythings! 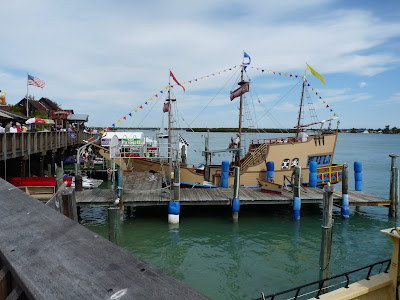 But,one of the funniest moments for me and my daughter was during a break we took at one of their little outdoor pubs. It was a warm, sunny wonderful afternoon.
First, I was aiming my camera out at the water to catch shots of their many pelicans (which I LOVE!). 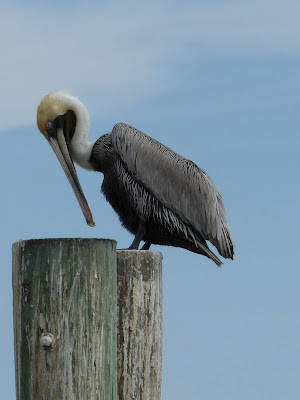 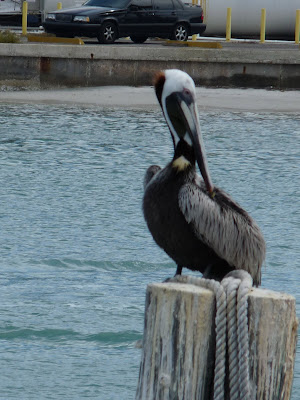 A couple was sitting next to me at a little table. The guy was a HUGE man and had Mardi Gras beads on. He was sitting with a tiny woman (wife?). They asked what kind of camera I had and we chatted about it for a bit. Then she said: "He was going to sing here today, but his throat was too sore!" Evidently he and a saxophone player were going to be the singers outside for the bar. So, I look to my left and there is this guy with a saxophone and a fake set of (blonde!) dreadlocks over his black hair and dressed like a pirate. He has his official eyepatch on......the whole deal.
So, we end our conversation and I head back to my table, where my hubby and daughter are.
They tease me about trying to pick up the Mardi Gras-bead-wearing-sore-throat-guy.
Then, the sax player starts. 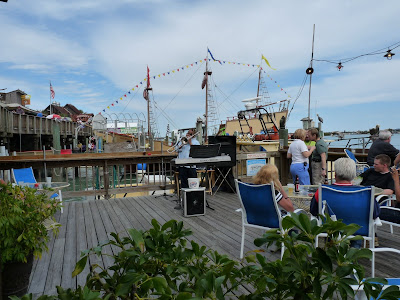 He actually sounded pretty good. (Maybe it was the mixed drink I was having out in the sun?). He's playing reggae and oldies, and I am getting into it.
Then, a pelican comes and lands REALLY close. Like right behind the sax player's shoulders while he is singing.
So, I jump up, and standing in a corner pretty far from the singer, I raise my camera to see if I can use my zoom lens to zoom in on the pelican (beyond the singer).
Well, the sax player sees me aiming at his general area, and thinks I am filming him.
He starts smiling, (dare I say flirting?) and nodding his head at me as he is singing.
By then, I had already taken the bird photo and am just cracking up. So then I think, "what the hell!" and I snap two photos of him. Here he is (in all his glory!): 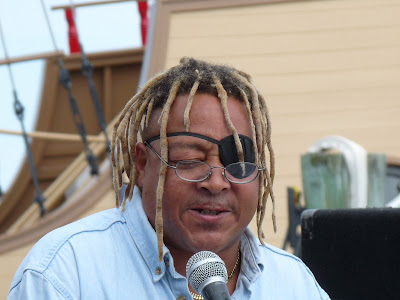 So, I get back to my table and I am giggling, telling my daughter that the guy was winking at me.
And, in deadpan manner, she says: "MOM! How can you TELL he was winking at you? He has an eyepatch on!"
Then, without missing a beat, she says: "You Know....when you are a pirate, every blink is a wink!"
(Because of the eyepatch!!!)
Of course we get a giggle fit like no other.
Since she is good at graphic arts, she says to me: "When I get home, I am going to make something we can use to put on a T-shirt that says: "When you are a pirate, every blink is a wink!" and makes this:

We still get the giggles whenever we see an eyepatch or a pirate.
Posted by The Retired One at 9:29 AM

Love the revelation on pirates and the graphic...love the pix again as well! We went to a similar place in Pompano Beach years ago and I loved all the pelicans too! Enjoy the warm weather! It's in the 30's here! (shivering!)

Haha, that was funny. I ate at a Bubba Gump's once at Navy Pier in Chicago. I had breaded fried shrimp. Yummy. I could eat some right now.

Insanity Kim: Yes...who knew that a winking pirate might actually just be blinking.ha I had to laugh at the sax player too because he was wearing glasses over the eye patch! It is supposed to cool down in the 60's tomorrow and the next day. We plan on leaving Madeira Beach on Monday and heading up an hour north for a day..then on home (it will probably take 2 or 3 more days of traveling).

Loree: We didn't eat at this one. My daughter went on-line and we heard it got bad reviews. So, we are going to get our fresh shrimp tomorrow night at another restaurant on the beach instead.
Yes, you are right...YUMMY!!!!!

First learnt the word Pirate was from Treasure Island many many years back, but yours is a funny type.
The outdoor pubs look so much similar to what I am having over here. These lure me to rush there now for some seafood.

Rainfield 61: The outdoor pub was a lot bigger, the photo was just of the outside deck....but they are all cute and always ready for you to sit and eat seafood and a brew or two!!!! Arrrrrgh!!! (as a pirate says!)

Your daughter will entirely understand. Unless it's late. Then only I would understand. I found mine at Target. If there is a Target near by. At all. They've got the wonderful red goodness down the aisle of sweet delights that will rot your teeth (aka the candy aisle). Hope that helps and I will think of you while I eat the rest of my bag of red vines and probably, more than likely puke my brains out tonight. Hope you are having a wonderful trip and visit with your daughter!

I always thought they should make a place like this on the Detroit River. Sounds like that pirate guy worked hard for his picture, so he deserved to get it on the internet.:)

Brittany: I white-knuckled it through without the licorice. Hope you are done ralphing. Remember it is not blood...it is the RED from the licorice! ha
Yes, we only have today left and we head north! I will really miss my daughter and the warm weather!

Ratty: Yes, that would really help Detroit's image and tourism...they did Navy Pier in Chicago too and it is also a wonderful place. Yep, the pirate guy was a hoot. (And I STILL say he was winking, damn it!) hahahaaaaa

oh I love this! are you selling t shirts now? LOL

Pehpot: So good to hear from you...I have been missing your comments!
No, no T-shirts made yet...but we sure laughed and thought about it!!