I have plenty more of the Florida photos
to share with you.
But today, I decided to get back to
some winter photos
that I have taken over the last few months.
I know most of you have trees blooming
and flower gardens in color,
but up north, our spring usually doesn't hit until late April or May.
So I want to share some photos we took
at
Michigan Tech. University
at their annual
Winter Carnival.
The fraternities and sororities have full blown competitions
as to who can build the most awesome
snow sculptures.
Bragging rights are fought over valantly.
We went up a day after the judging to grab some photos.

There was an unusual meltdown (warm, sunny temperatures) the day we went, so they
weren't in pristine condition, but you can still see them well.

This was not the winner, but it was my favorite: 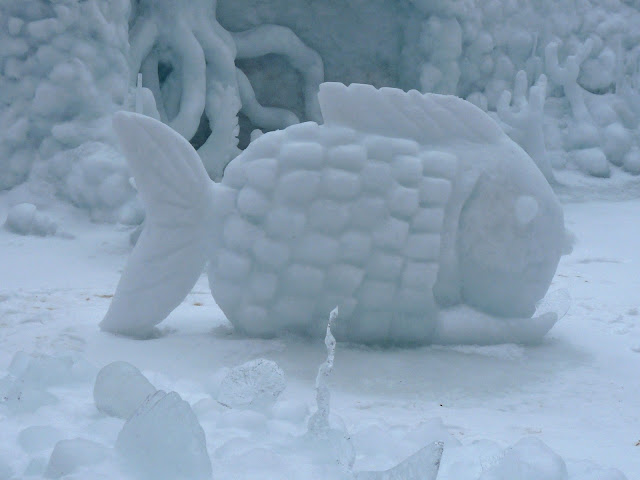 This shows part of the winning sculpture from the Chronicles of Narnia: 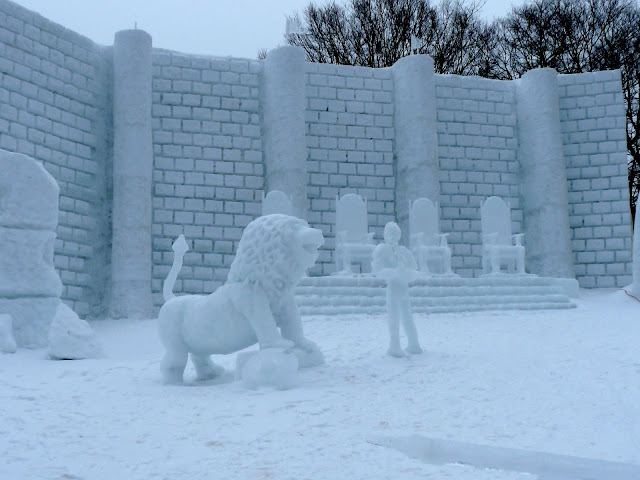 Although this dinosaur was nothing to sneeze at either: 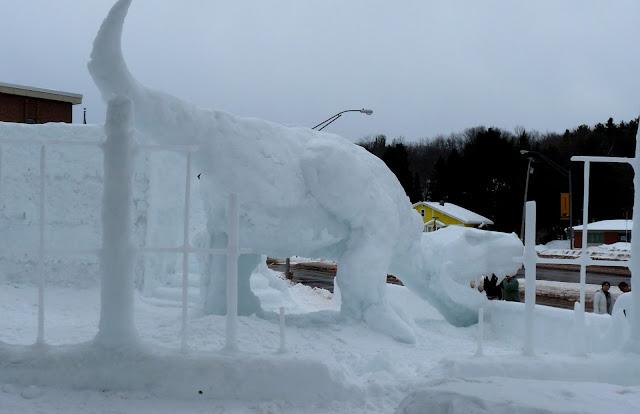 (Well, I might have sneezed...I mean it WAS winter out there people!!)


Everyone there was climbing into the dinosaur's mouth to get their photo taken.
(I would have but my husband restrained me.) DARN those husbands!!: 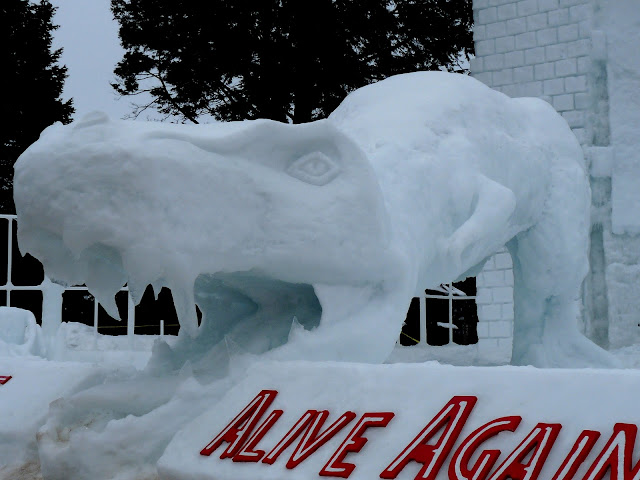 Look at those icy teeth!: 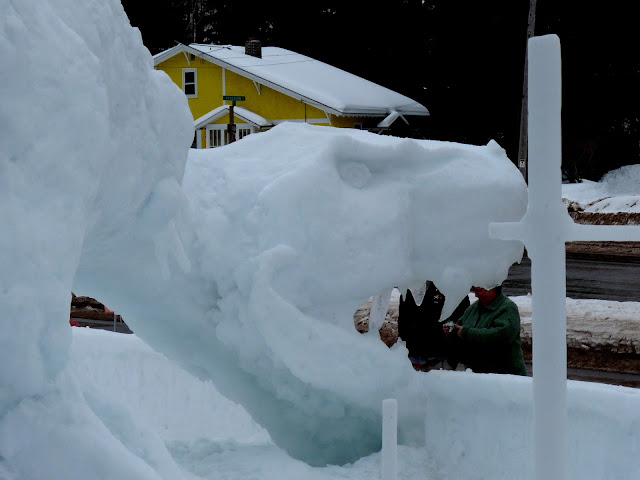 But here is the entire fish scene that I adored:

It was full of details too.
For instance, scroll back up and see that clam? It even had a pearl in it!
But I really
fell in love
with
THIS!: 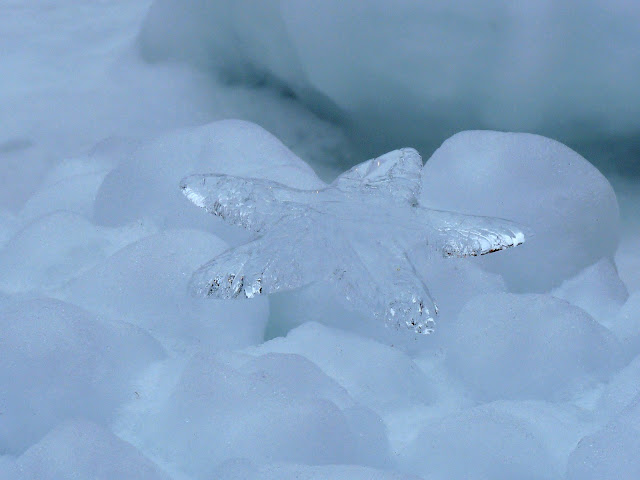 It was still cold out there...
I'm not LION!
(Sorry about that, I just couldn't help myself): 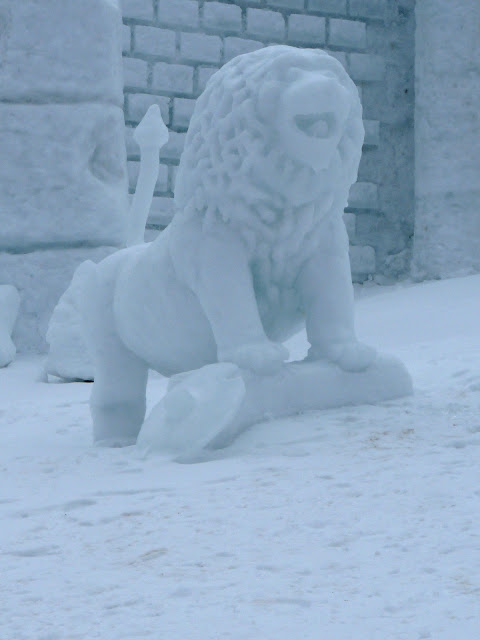 See why it won?
It is huge and took so much work!: 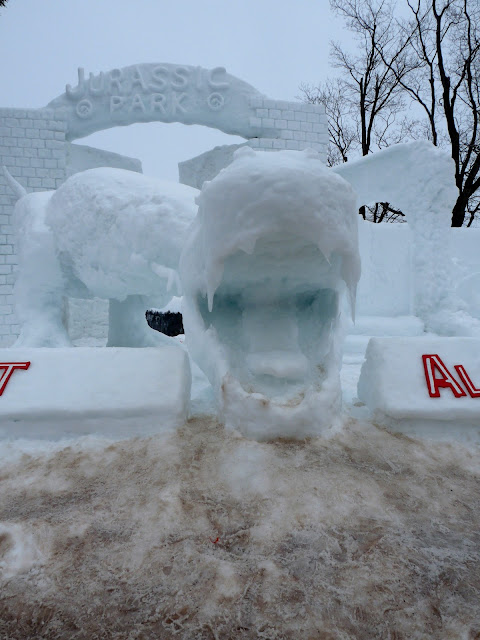 (He really isn't barfing something..that is dirty snow in front of him from the meltdown).

I kinda liked this guy too!: 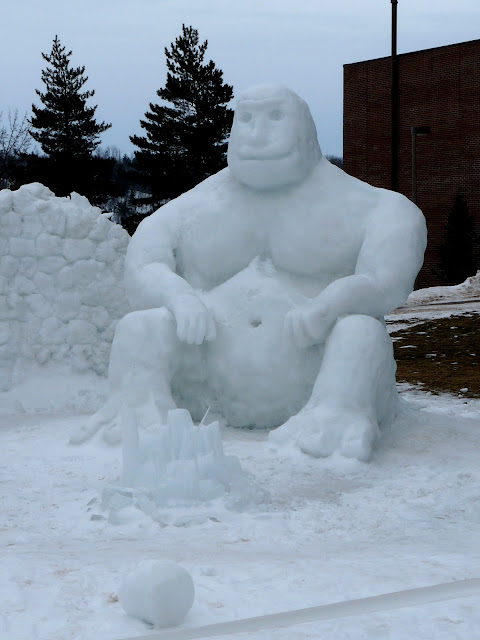 
I loved the ice tail on this beaver too!: 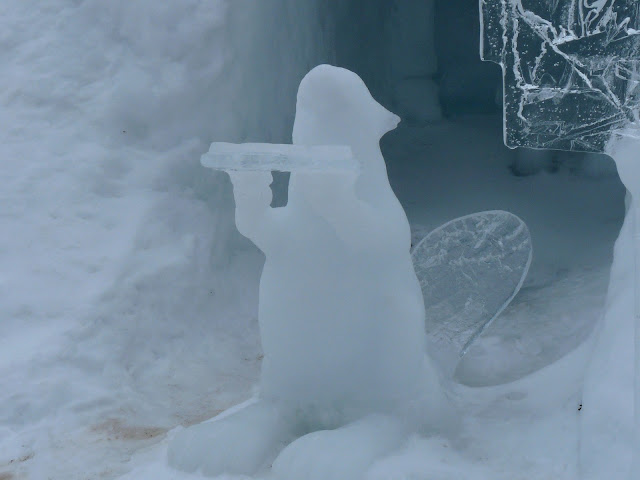 And just LOOK at the detail in those ice flames!: 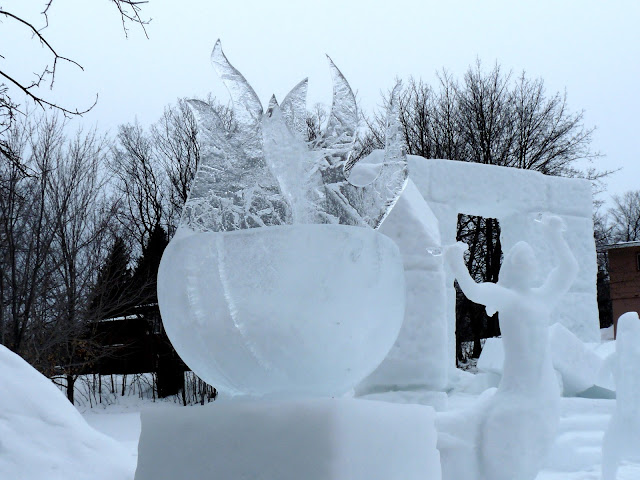 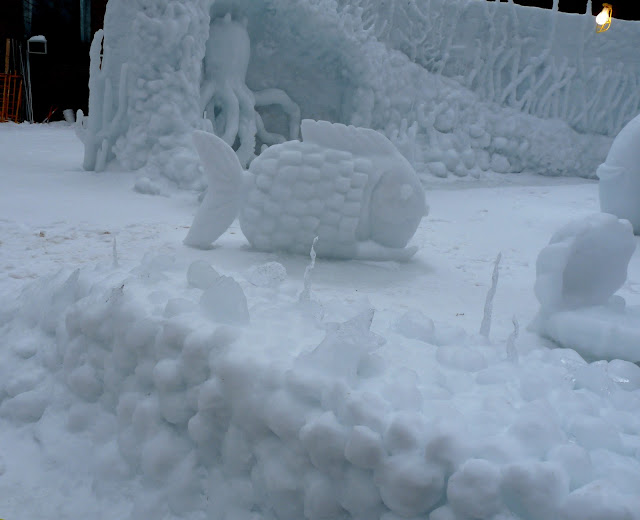 The imagination from those young people!
This is huge and so well done.
Another one had a tower with a clock on it too!: 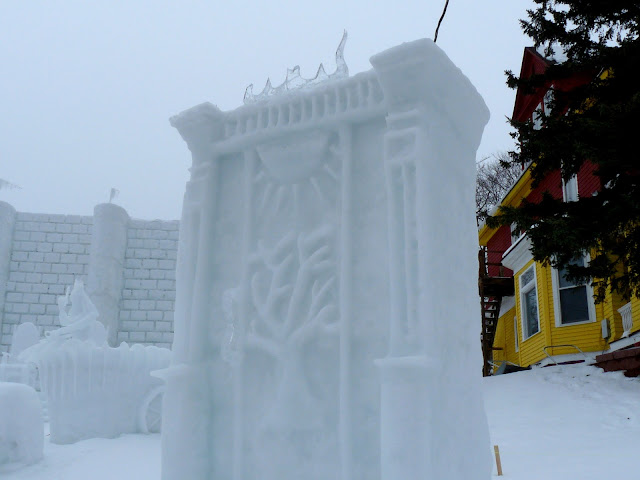 If you ever get up to the U.P. of Michigan in February,
make it a point to catch the MTU Winter Carnival, the snow sculptures there are wondrous!
******************************************
I will getting back to more Florida photographs
for the next blogpost,
but will still try to intersperse some winter photos
every other blogpost for a while untl I run out of the winter photos I have taken.
Besides, that is how our Spring is going....
one day like winter, the next day: not-so-much!!
Posted by The Retired One at 7:00 AM

Those are awesome. So much work and so much detail - unbelievable. I like the fish scene the best too.

these are so cool...esp the lion (narnia)one and the dragon...so cool what people can dowith ice/snow...

these are totally, totally awesome! what talent, the detail is mind blowing. very similar to our sculptures in sand at the beach, but this is so much better. i like the ice flames. wow. and the peak at that bright yellow house behind the dinosaur makes me want to see it to

WOW!! There was a lot of cold talent at work there! It amazes me how people can do that (or build elaborate sand castles). Thanks for sharing because I doubt I'll ever see it in person!

Wow! those are totally amazing snow sculptures! the cold hours involved in creating them!

Thanks for the great pix. Wish I'd been there (with lots of layers of heavy, warm clothing, of course)

Incredible! I am amazed by these! Thanks for sharing them with us.

The work that has gone into making these is incredible.There are some very talented and persistent people around.I love the sculptures,now can we get them to melt? You see that would mean it was spring.LOL

I love ice sculptures and these are a lot of fun.. as are your descriptions. I love that little starfish and that beaver just has to be Canadian, eh? ;) The underwater scene is terrific but that lion had to be the mane event. ;)

I love them all, especially the tail on the beaver!

These were wonderful I am glad you showed them. Very talented artists at work there. Good for them!

I thank for your warm heart and thoughts...

Joan, Those are absolutely spectacular!!! I am with you as my favorite is the fish...I love the star; it just looks so delicate and fragile!
Thank you so much for sharing such beauty and hard work!

What amazing snow sculptures! So creative and beautiful.

Oh wow, those are some talented folks. The dinosaur is so cool (pun intended). You should have taken your hubby's photo inside the mouth. :)

I'm so jealous these are amazing, after spending a freezing 30 minutes "trying" to build a snowman for the kids, as soon as I pushed in the carrot for his nose it collapsed in a heap. I don't think I'll be entering any competitions anytime soon.

Amazing photos - I love the little star as well!

Beautiful ice sculptures, Joan... I have never seen ice sculptures (except in punch bowls--ha)--but I have seen marvelous sand sculptures. Both are tremendous. Such talent!!!!!! (Loved your joke about LION)...

The amount of talent some people have is just incredible. I can see why Narnia won...it's my fav of all the sculptures too. :-)

And I say "Wow" too! Amazing and the work...OMG!!
Great photos too!!
Congrats on your POTW award
Hugs
SueAnn

Out on the prairie said...

What talent and what great pictures you took! I think I might had a trip to the carnival to a list of future "I wanna go..." spots :)

The photos came out so very well that I felt like seeing them for real. That star did a great job with making it cute and attractive as well as that fish with octopus design. Very very well done snow sculpture.

Happy New Year to All and a Prosperous year 2012 ahead...