I know I said that I was done posting pictures of Florida.
But I have just a few more incidental pictures I want to share.

First, a message for Ratty from The Everyday Adventurer.
(If you haven't gone to see his blog, you gotta go there).

This southern Florida squirrel had a message for Ratty and his Michigan squirrels.
I saw him on the tree when he was chattering at me: 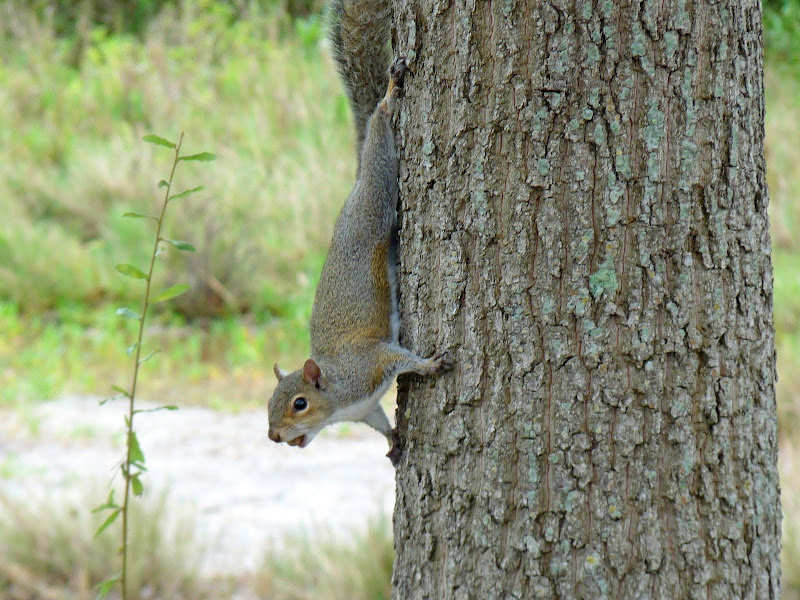 Wait a minute!
He wasn't chattering at me....
He was sticking OUT HIS TONGUE at me!: 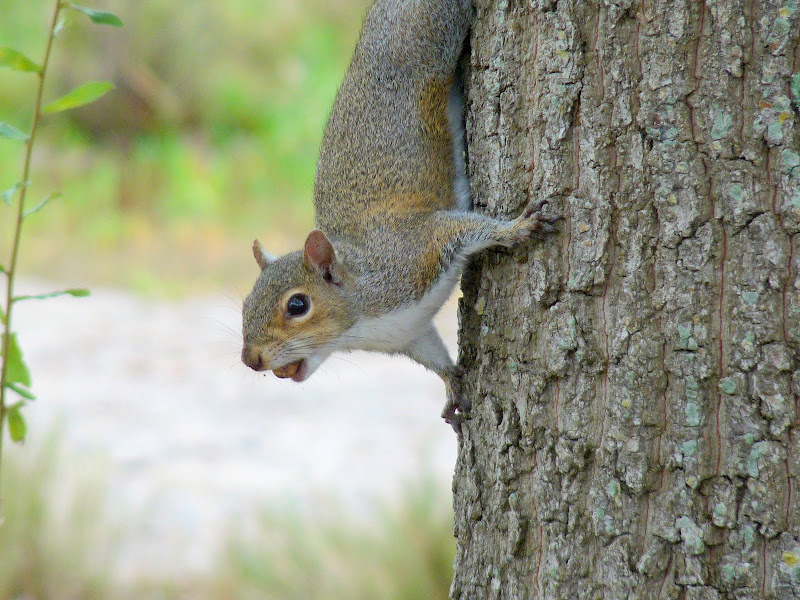 He said, "Ratty might think that all of us squirrels are alike.

We do NOT all shut or squint our eyes right before we run away.

See? MY eyes are wide open!

We do NOT all love the snow.

We do NOT attack humans.

We think the humans are funny.

Then he added: "So THERE! Make SURE you give THIS to Ratty and his squirrel friends"...

and he did it AGAIN!: 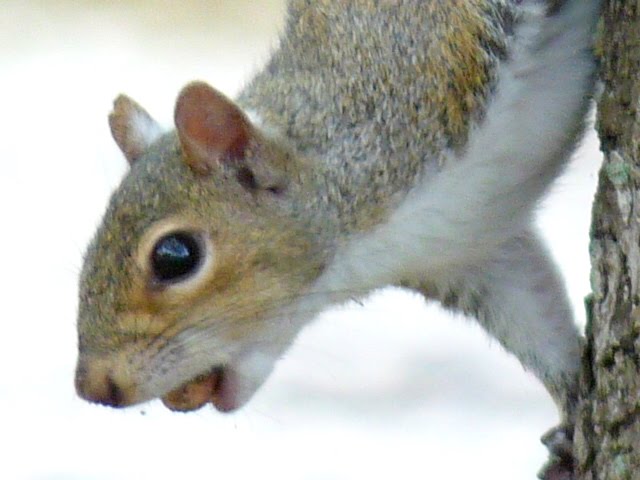 (Ratty, you better challenge YOUR squirrels to stick their tongues out at HIM and get a picture of it to send back to this bratty Florida squirrel.)

Not only did we see native birds (not to mention squirrels) in Florida, the hotel's family had a pet bird too.

Her name was Houdini: 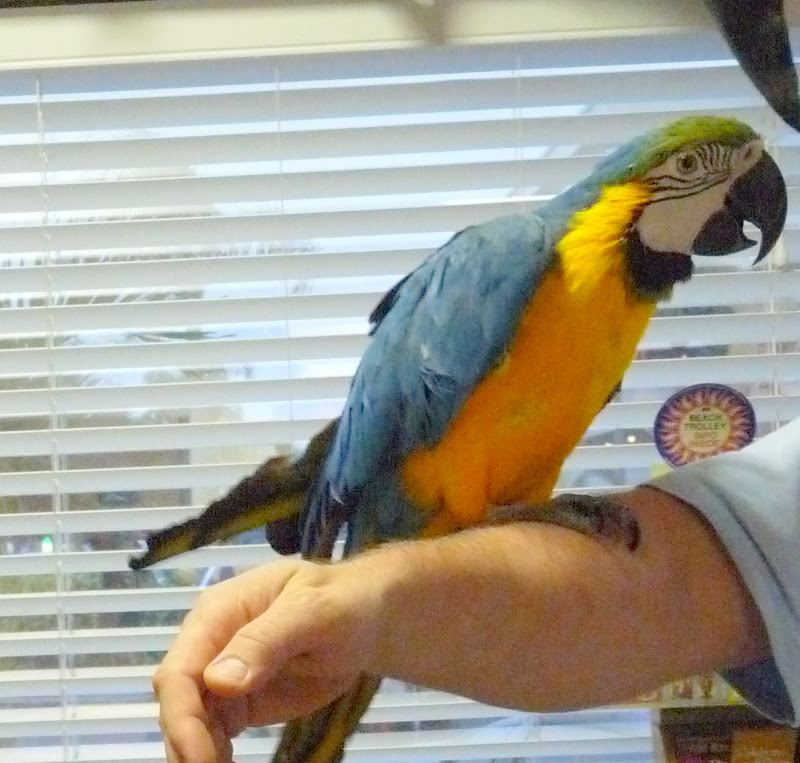 She was so friendly.

She knew lots of words.

She loved popcorn and I indulged her. 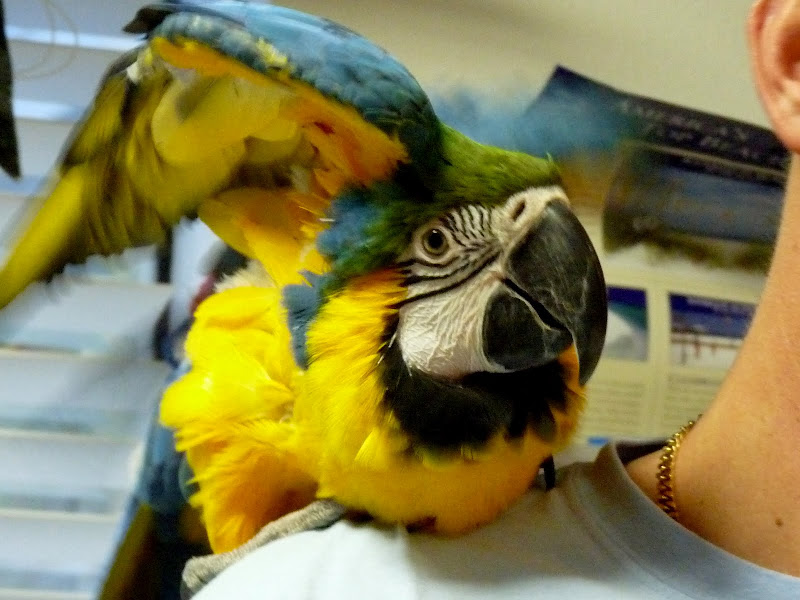 She would give her master kisses and she would hold your finger with her beak.
We bonded.... 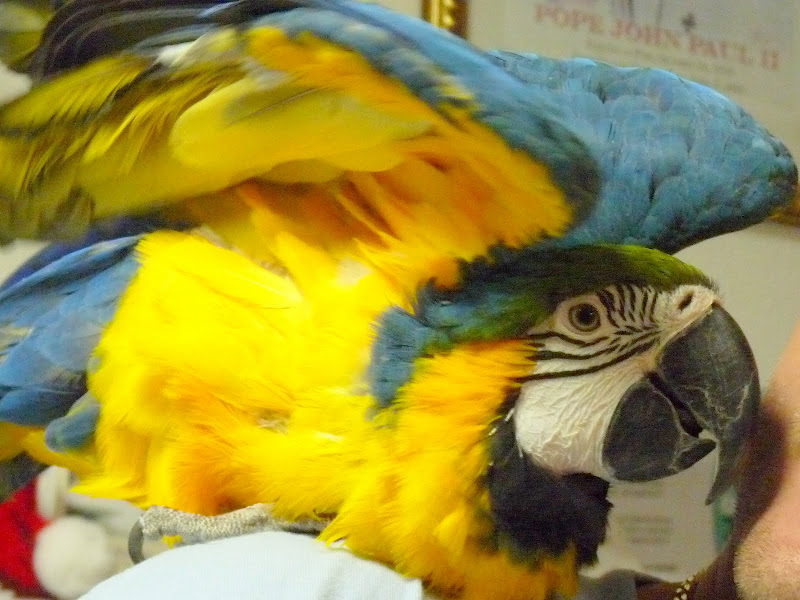 I spent a LOT of time with Houdini.... 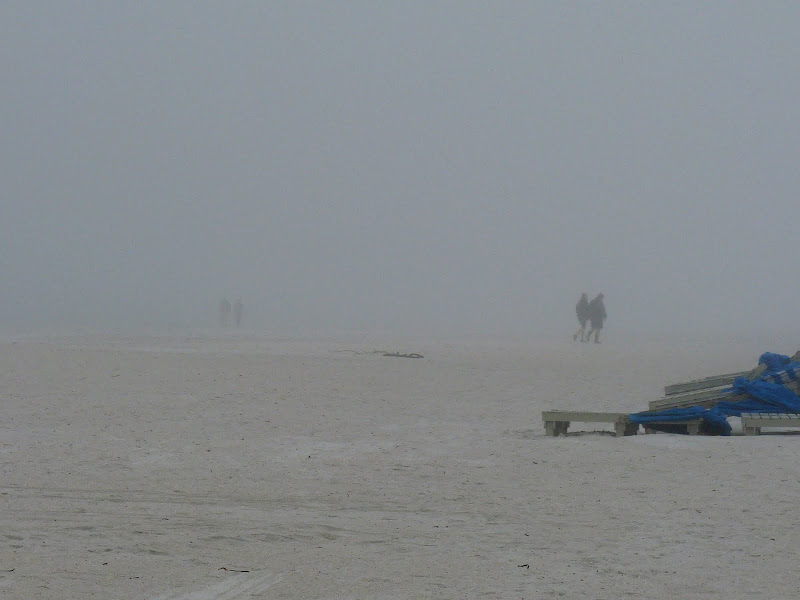 But, they paid Bingo every day for prizes and it was right next to Houdini's cage.

Did I tell you it was COLD and RAINY when we were there????
Posted by The Retired One at 6:00 AM

I love the beach, even when it's cold and rainy! Love the bird! So pretty!

And did you layer up with all the T-shirts? Still, better temps than here! Cute little squirrel!

Hey, right now as I blog one of my squirrels is looking in at me telling me go get another ear of corn. He hangs out on a branch where I had a feeder three years ago. He still goes there to find food, not too smart. I love the parrot. My cockatiels are so personable. You took so really nice photos of the parrot.

We love our squirrels too.

Man, that pic of the beach is beyond DEPRESSING! So glad you are more of a photo follower than a sun follower, because without that you might have gone insane in a hotel bar, don't ya think? ;)

Ugh--I don't blame you for not walking along the beach that day...

That squirrel looks like all of the trillions we have up here. Want some TN squirrels in Northern Michigan???? I have plenty and will be glad to send you a bunch!!!!

Houdini is pretty... Love those colors.

Question? Is this your only blog? Do you ever show family/friends/your life, etc. on your blog??? Just wondering.
Hugs,
Betsy

Yep, you can't be trusted. Give you a camera and an audience, and you'll just keep on going! Great pictures, and the beach does look a little bit... well, cold.

ha. i love squirrels. i could sit and watch them play all day. the colors of the parrot as well...an at the beach. betterwatch out for pirates!

Aww, I love squirrels! Yours was too cute. A squirrel with attitude! lol!

And I love these pictures! The clarity is amazing! Too bad you can't enter your own photo contest!

I love that foggy walk on the beach!

Oh yes you did! Poor thing! At least you made a friend? More than one I presume?

Oh the hotel bird is so pretty, and I even enjoyed seeing the beach with the wind, rain and fog. Great photos again Joan....Hugs

Eva: I don't mind the beach foggy but 7 cold days out of 9 kind of depressed me. ha

Lucy and Dick: No, but I did go buy another sweatshirt while I was there because we didn't pack enough clothes for that cold weather. Live and learn!

L.D.: Thanks! We don't see many squirrels here in our yard in the winter. It is nice to see any wildlife out there when it is cold though, isn't it?

Insanity: Yes, I was happy to get out and get some photos and when I got to do the tropical birds it was so much better than worrying about the beach and how much sun we were missing. ha

Betsy: Yes, this is my only blog...in the summer sometimes I show my home, house, yard, garden and lake..but I don't post too many photos of family...they are too shy to let me. ha I am sure when my new grandbaby comes I will show all three of our grandkids on here...do you think people would like that?

DJan: You are so right...! If there is a photo to be had, I will be there snapping away. ha

Brian: You are right...that foggy sea is perfect for the pirate ships to be right out there close, waiting to storm the beach!

JJ: I am getting some really nice entries for the photo contest (like yours!) but only have 5 so far..I hope a few more people give it a try too!

Joanie: I always love fog in photos for the mood it sets..and this was a cold day, so you can tell in the photo for sure!

Jientje: Yes, we met some fun folks there and of course all the birds I met. :-}

Bernie: Houdini was fantastic and fun to meet at the hotel...we hope to go back to see it again. Do you know yet if you are going to Florida this winter?

Maybe Florida squirrels stick their tongues out while Michigan squirrels squint. I've never seen a squirrel tongue before, but I've seen their little fangs sticking out. I'll stick my tongue out at one next time I see one to see of it does it back.

Squirrels are just wonderful. Loved him too...
Wow, that Parrot looks really friendly. How old was he?
Anyways, have a great day!:)

Ratty: A little secret? It is possible he has an acorn in his mouth and that isn't really his tongue...but I couldn't tell for sure and so I used it for the post to tease you!

Loree: They are ALL cheeky, aren't they? ha

Mr. Stupid: The bird was a little lover! She was just about one years old and SO smart...she already knew about 5 words and was so friendly. It was a girl even though they named her a boy's name. :-)

You have a squirrel, too cool, I love it. He is such a cutie! My favorite little critters. I believe that is a peanut shell in his mouth. But, as you said,it was fun to tease Ratty.

SquirrelQueen: It probably is a nut in his mouth, but yes, it was fun to tease Ratty! :-}