Florida Vacation Photos: The LAST one in the set!

This is the last of my set of Florida vacation photos, which is probably a good thing, since I did quite a few posts! :-}

Have you ever seen an angel?

Because I saw one, hiding in the trees: 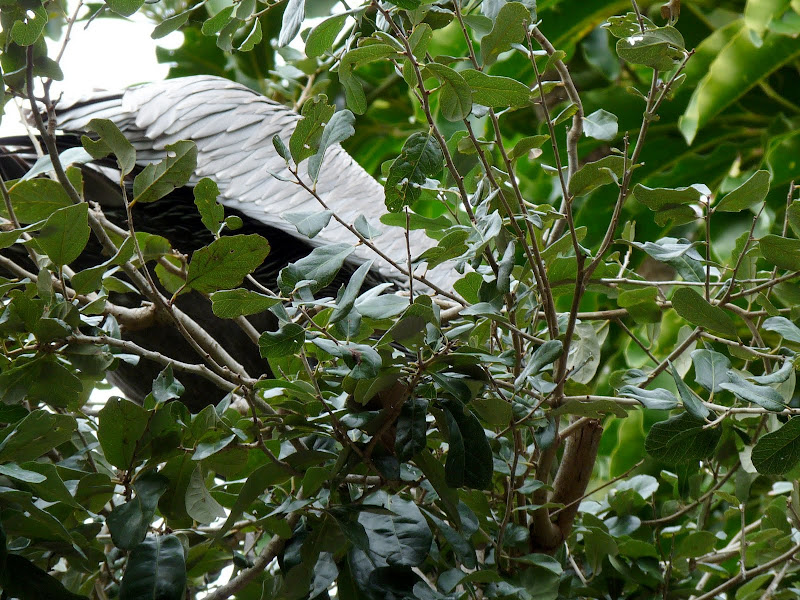 If THAT wasn't an angel's wing, I don't know what is.

There was also a white pelican hiding in the tree, too: 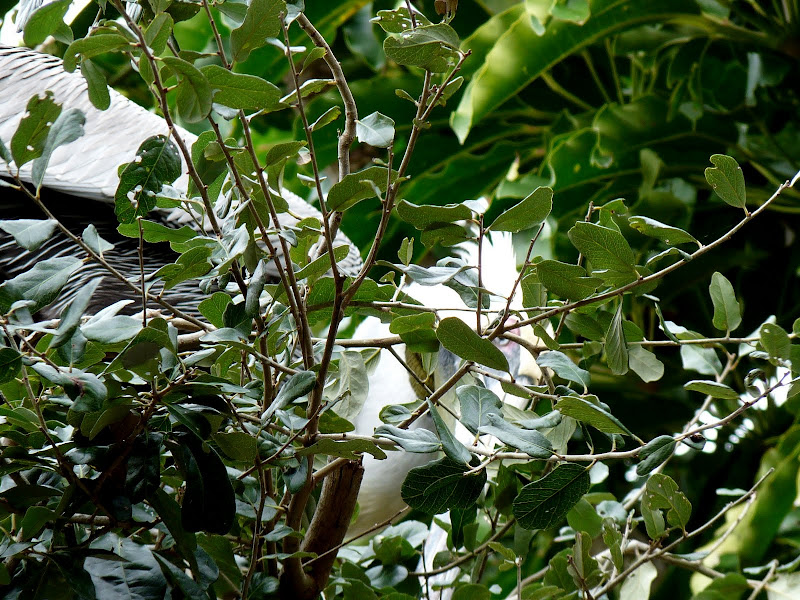 Just LOOK at his huge wingspan!

It is amazing that he could land there at all: 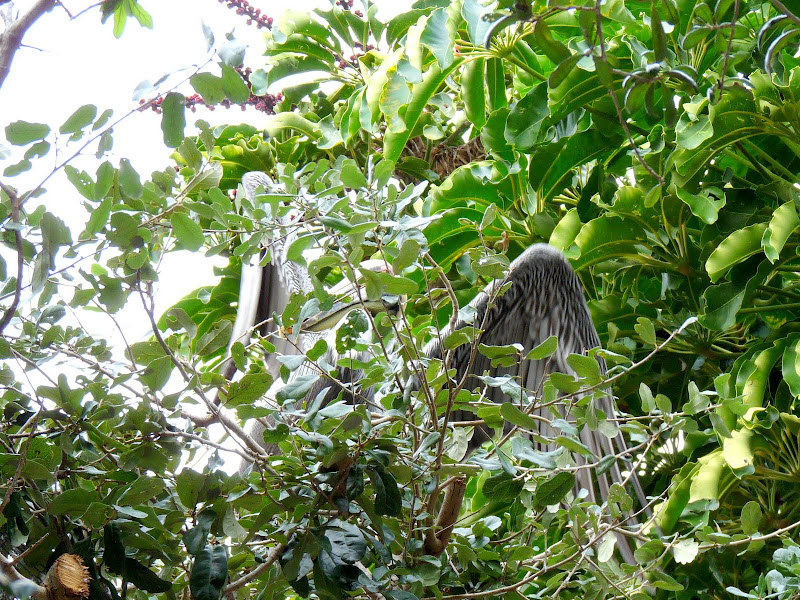 Magnificent!
I think maybe they are the ones that give angels lessons on how to use their wings, once they've earned them: 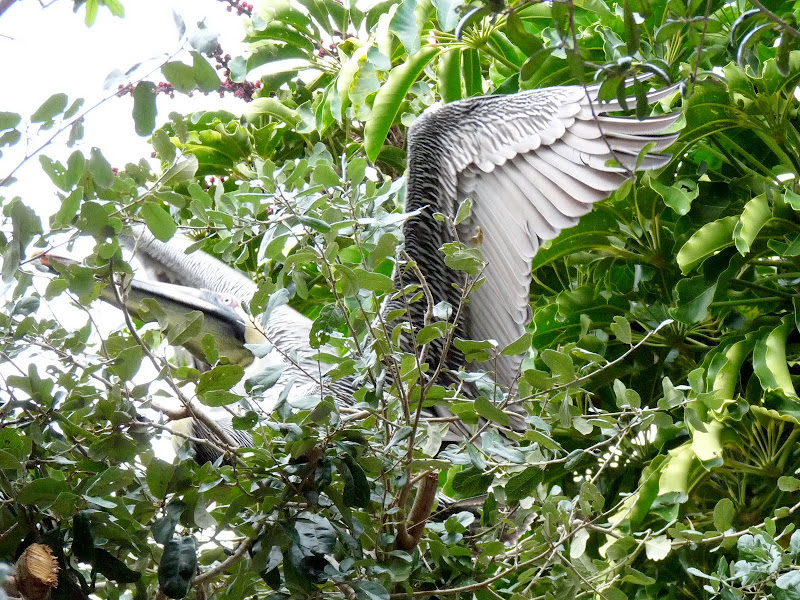 Time for a little bath: 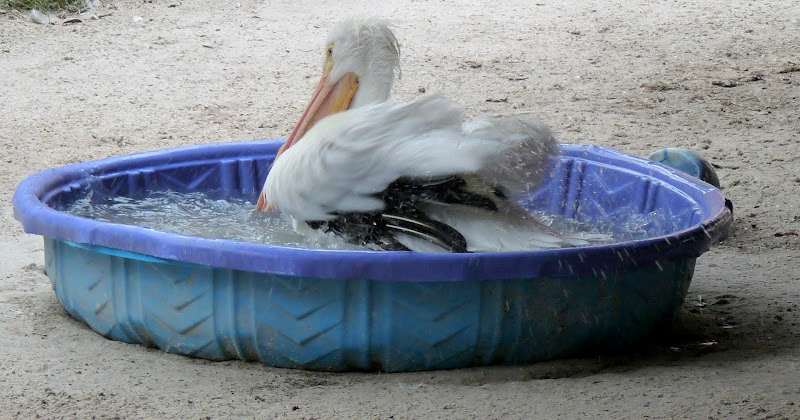 And this one is doing his daily walk: 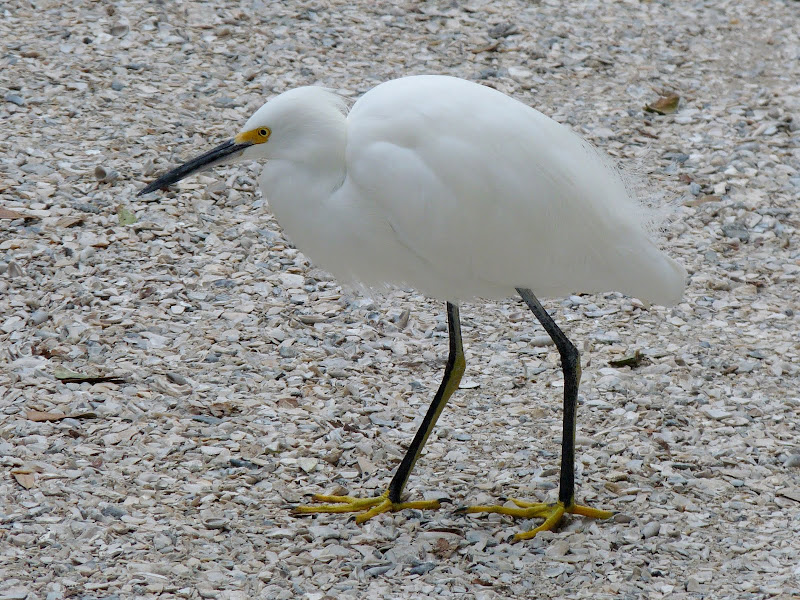 I have never been lucky enough to capture a picture of an owl in the wild.
But the bird sanctuary gave me the next best thing: 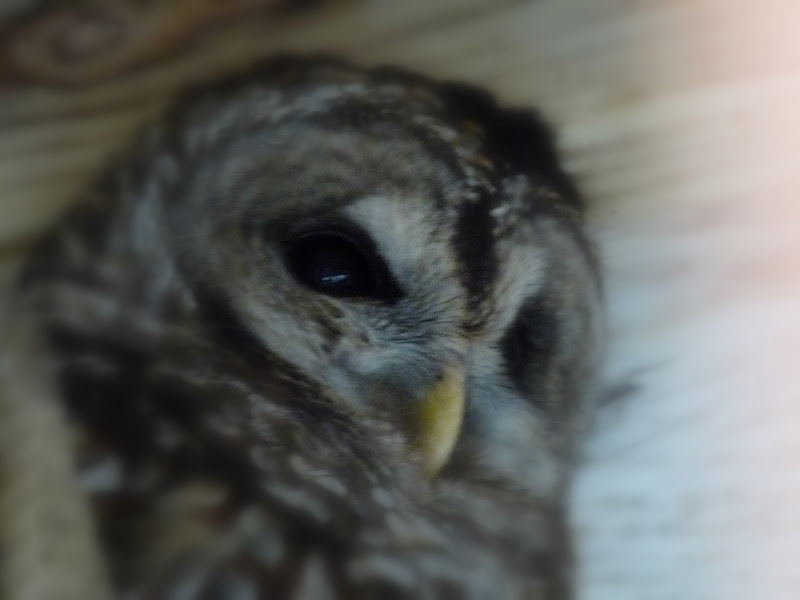 I loved this HUGE tropical plant!: 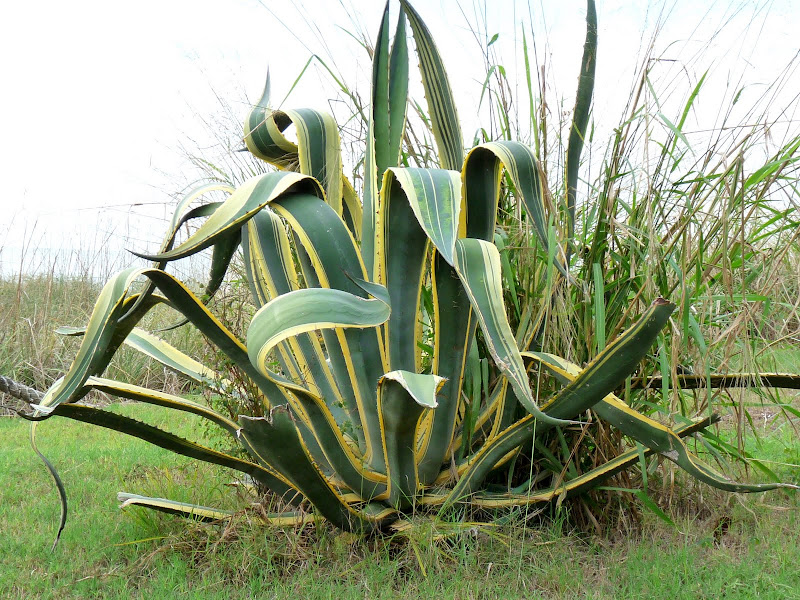 Doesn't it look like the kind that reaches out and eats people?

Oooooo...
another chance for a darling little owl face: 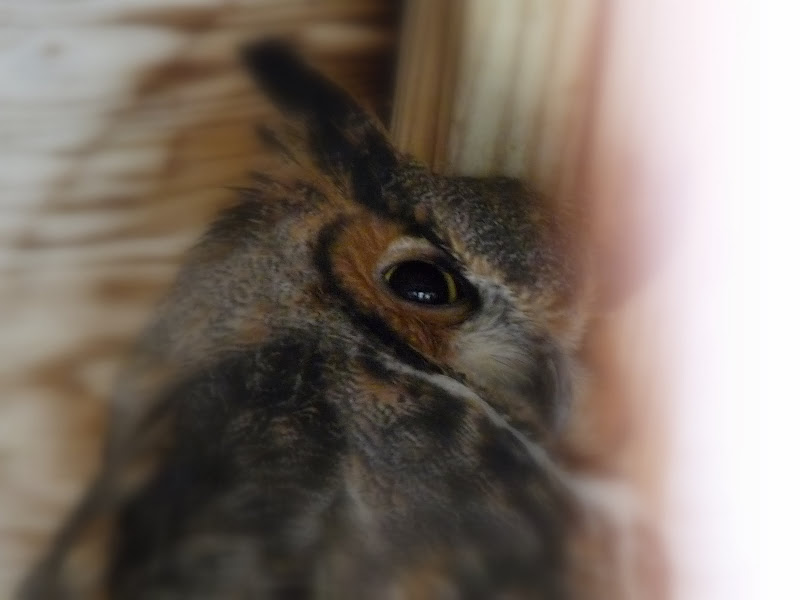 And this little guy, airing out his wings!: 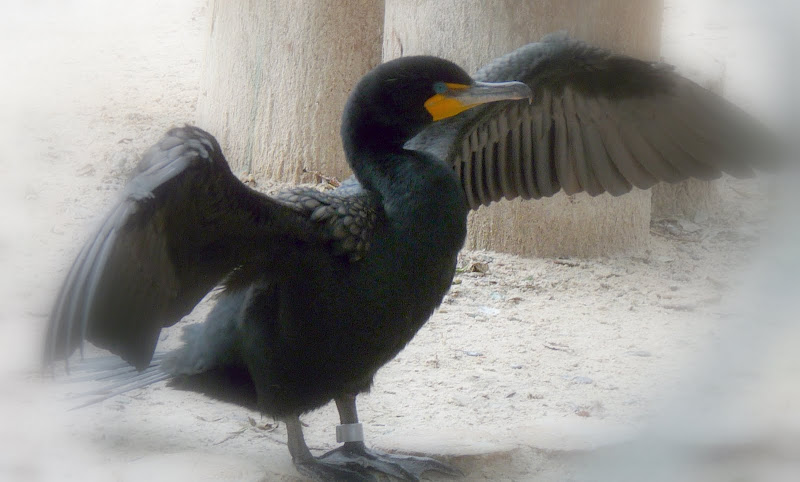 But I am still SCARED from this PLANT!: 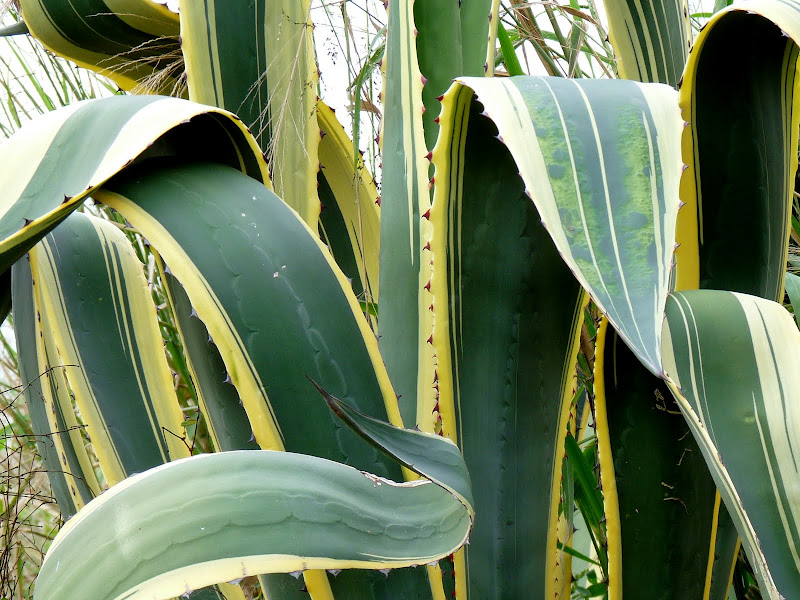 
But not before I got this last shot of a my favorite: a Pelcian (with ATTITUDE!): 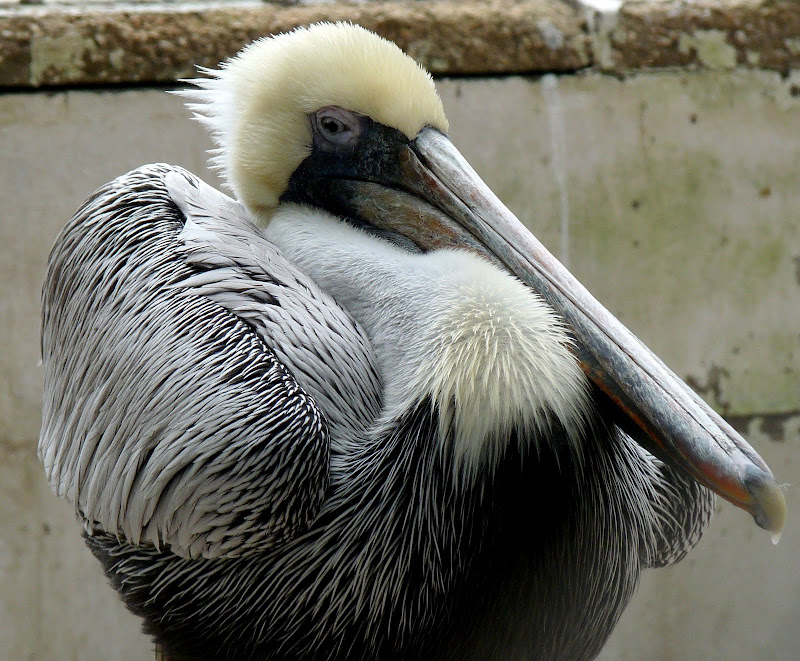 He is saying: "You HAVE taken enough pictures of "our kind" now?

But I will be heading back down again in April (because our youngest daughter is expecting her baby then).

So they may want to assume another identity with the FBI and go into hiding.....
Posted by The Retired One at 6:00 AM

I can hardly wait til April for more photos!

Good Morning, I am getting ready to paint. I have been doing a little painting and getting a feel for our new home. But like to stop by and see the birds. Final pictures...tears. I do love the peek a boo pictures and the owl. What a pretty bird.

The plant put me in mind of "The Little Shop of Horrors."

I liked the bird shots, perhaps I will go to the Pittsburgh Avery and take some bird pics of my own. I have a phobia about birds pooping on my head, guess I will wear a hat.

oh that owl is magnificent! saw one just the other day. so cool.

watch out for Audrey II she has a mean bite. lol.

That plant looked like it had a huge appetite. I wouldn't linger within reach of those leaves for long! Love the owl!

Lucy and Dick: ok, but you will have to suffer also with newborn baby pictures,too...because you know how grandmas are. :-}

Carol: Thanks. I hope the birds gave you incentive to paint more. ha

Claudia: That's the name of the show I couldn't think of when I saw the plant!!

Brian: I wish I could find an owl in the wild to take pictures of, too!

Eva: Thanks! Yes, I think that plant was looking hungry!

I am so happy you will be returning to Florida soon as I know I am going to miss your post of your vacation....oh yes I have seen angels many times in many forms and one is in the form of my favorite photographer....:-) Hugs

Beautiful shots, Joan... Love that last one of the Pelican with Attitude!!!! And the 'angel' picture and the owl pictures are amazing.
Hugs,
Betsy

What a great collection of photos!!!! I especially liked the owl.

Bernie: So sweet! I will be fine, my foot already feels better.

Betsy: Thanks so much!

Joanna: I loved the owls, I can't wait to see some in the wild to photograph...I haven't been able to get one in the wild yet.

Joan, these photos are fabulous! I love them all, really ALL. You have a talent to capture birds.

Great pics, I love all of them. So many beautiful wings and you even got a cormorant with his wings spread. I love the owl, I would love to get photos of some of the ones here.

The plant does look like Audrey from the movie. Could it be a Century plant?

I almost missed this one. I really have enjoyed them all.

That pelican with an attitude is awesome! You're counting the days are you? I know I would!!

Susanne: Thanks so much...that is so flattering, coming from you (a professional!)

SquirrelQueen: I have no idea what kind of plant that is..but it was fantastic!

L.D.: Thanks so much! I had fun taking them all and sharing them.

Jientje: Yes, I am counting the days!

dianneavery: Thanks so much...I hope you return to my blog again too!