Today, we will take a small break from all the tropical Florida pictures
and get back to the U.P. , with snow still on the ground!
One day, as I was getting ready for the day, fixing my hair in the bathroom,
I heard quite a lot of bird noises right outside my window.
I opened the blinds and discovered that a flock of Bohemian Waxwings
had flown into our apple trees and were in a frenzy
eating some frozen apples that were left in the crooks of the trees by our Psycho Squirrel
outside.
They were even digging in the snow at the bottom of the apple trees to reach fallen apples there.
So, I did whatever crazy photographers do, and grabbed some sweatpants and went outside on my front porch and captured some photos of them with my camera.
I had to sneak out there, because they were pretty skiddish about  people, but I had such fun trying to capture them while they were all eating. 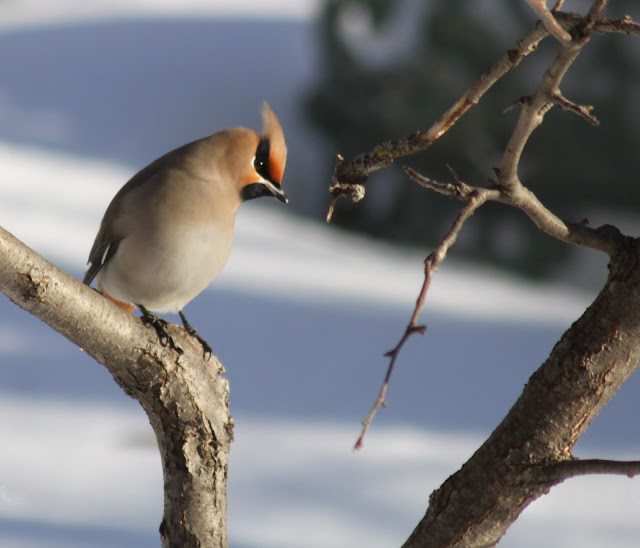 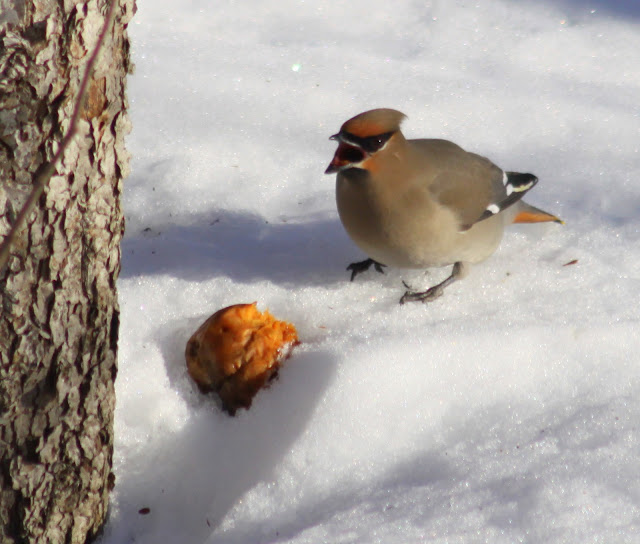 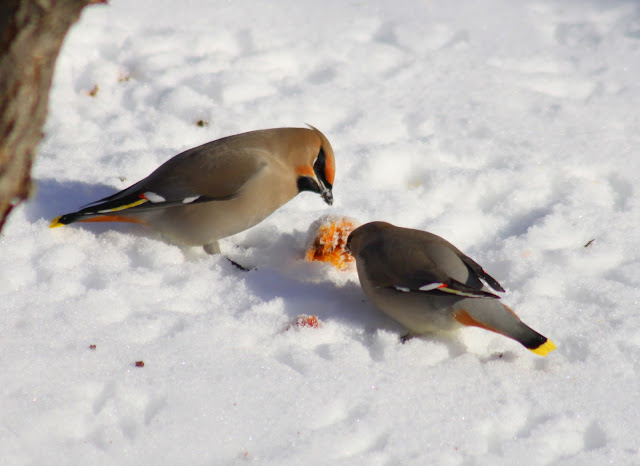 I love their feathery headcrests....﻿ 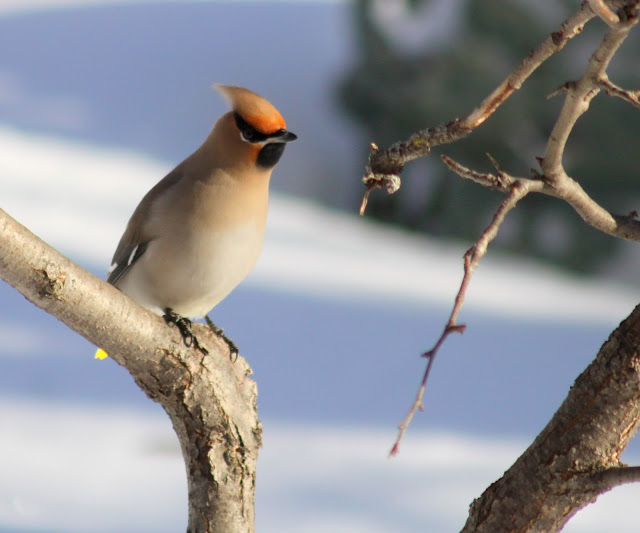 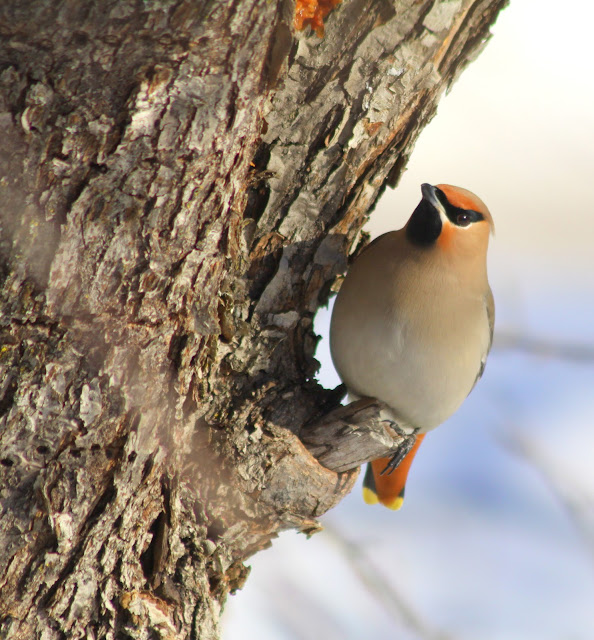 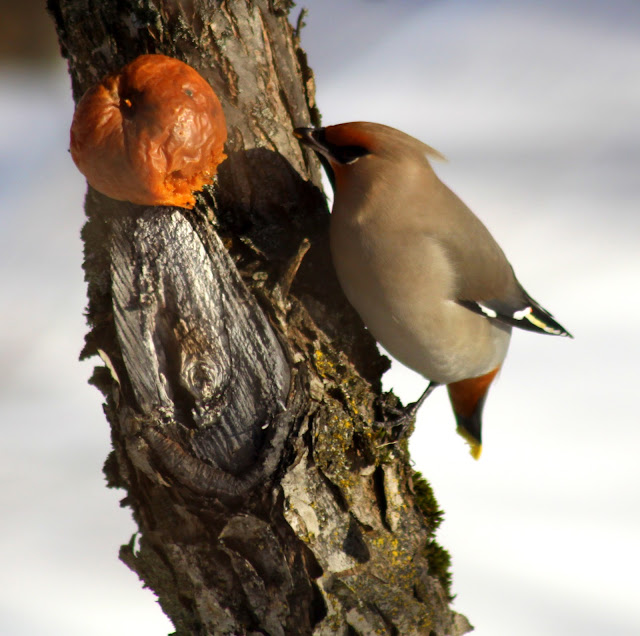 Excuse me, Fella..but you seem to have some apple on your beak...﻿ 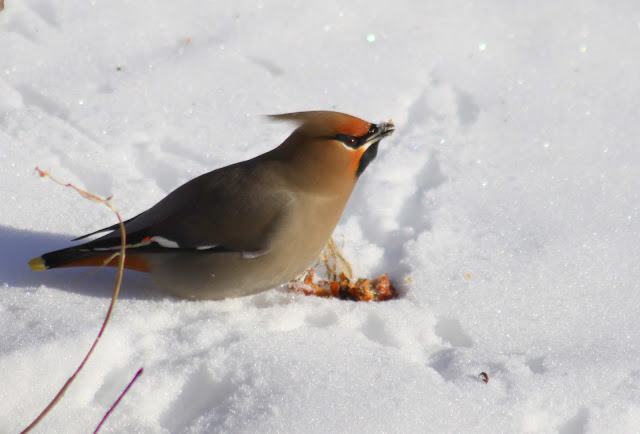 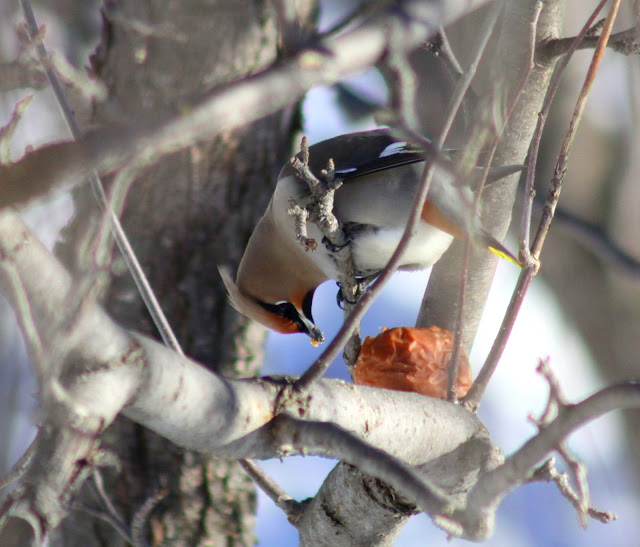 Their wing markings are beautiful!:﻿ 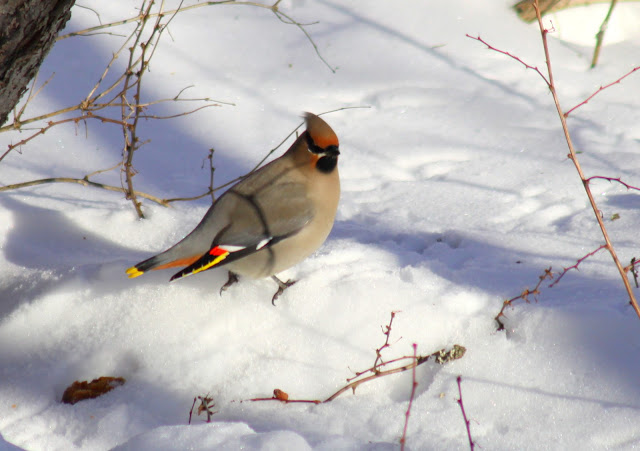 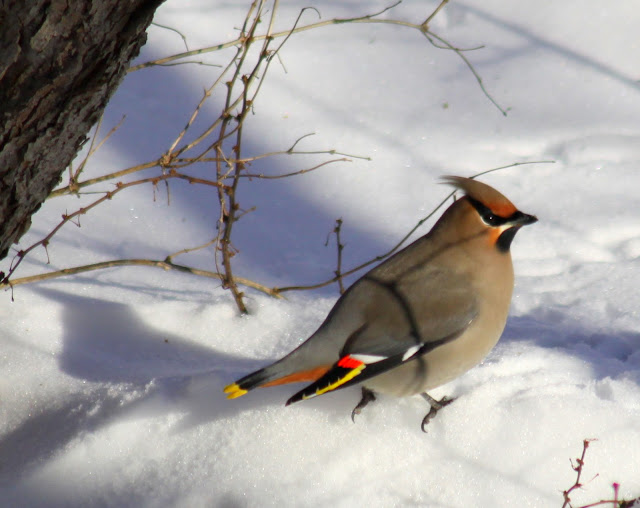 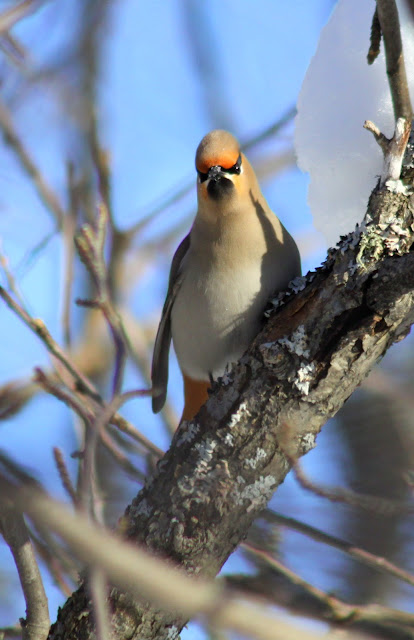 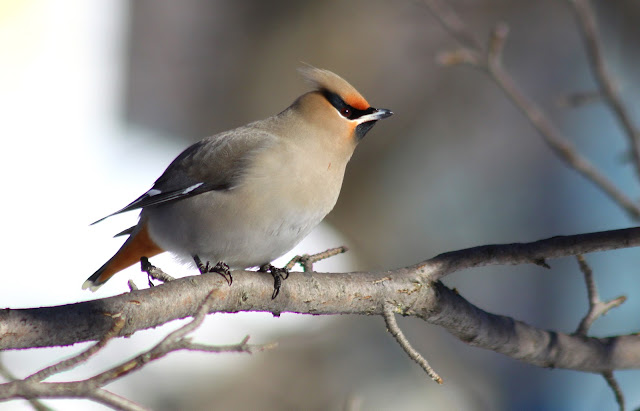 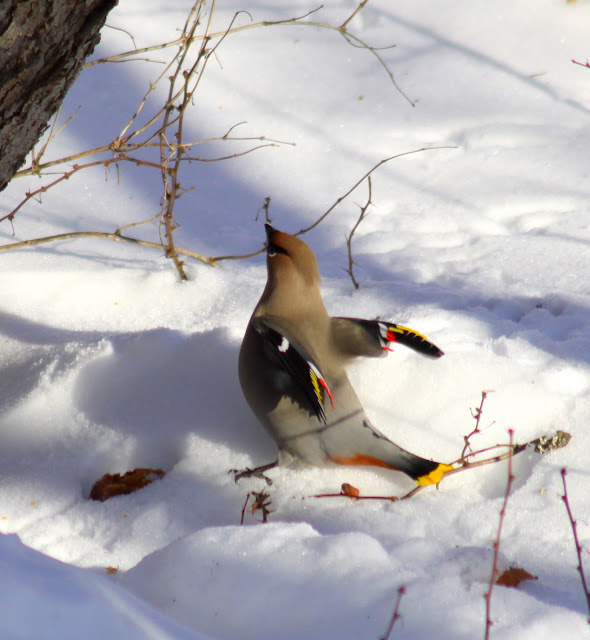 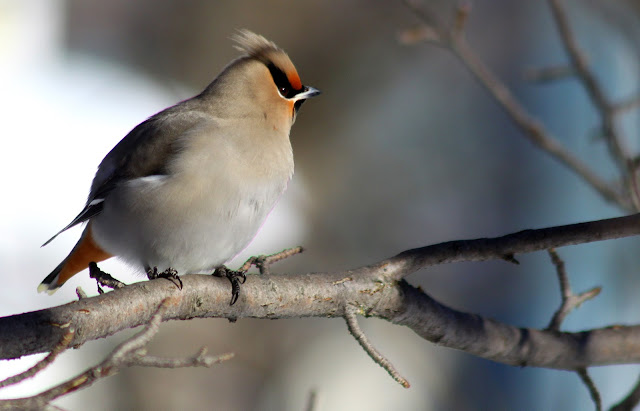 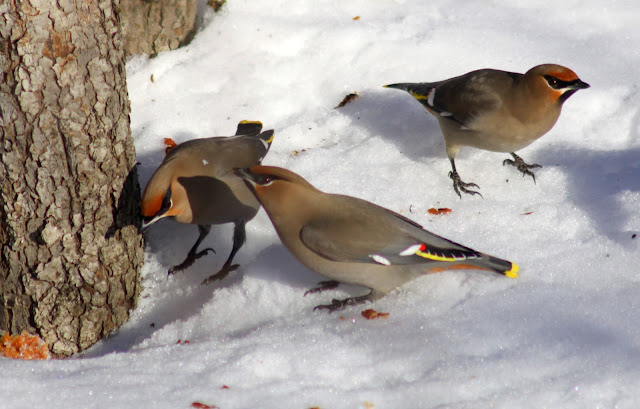 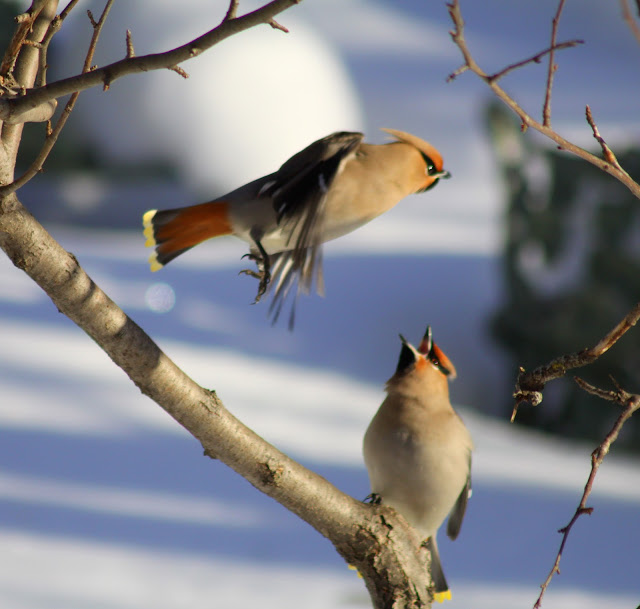 By the looks of that fluffy belly, umm..maybe he better lay off the apples for a while....:﻿ 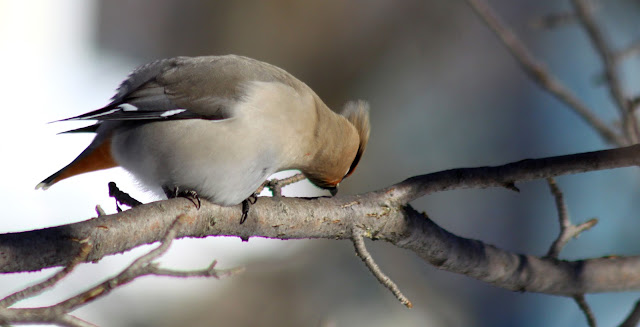 ﻿Spring is almost here, and I can't wait to see all the other birds return!
Posted by The Retired One at 6:00 AM

However cold and uncomfortable you were out there in the snow, let me say on behalf of everyone who reads your blog - it was well worth it.

I'll never challenge you for a bad apple!

Beautiful birds. I thing I saw and photographed a few in Beverly Hills.
We dont have them here in Greece.
Costas

In some shots they look like porcelain birds, their feathes are so smooth!

You captured their wing markings perfectly. How beautiful. Good for you for feeding them as well by leaving the apples.

It was your lucky day to get such great shots. They are just beautiful.

wow wow wow and wow again. I LOVE THESE. so much better than our boring egrets and ibis. i have never seen one of these, they are gorgeous. and the expressions on their face are so cute and sweet, i can't pick a favorite since they are all wonderful, but the upside bird made me laugh. the colors are magnificent against the snow. keep on snapping lady

they are beautiful the shading of their chest makes them look so smooth and then the splash of color on the wings...very nice..

These are beautiful! I didn't know you got waxwings in the winter! We've never seen them except to pick apple blossoms off!

You know I always look at the pictures even if I don't always comment on them, right? I love this guy, though, and had to say hello!

Gorgeous! I went to our yard to try and get pictures of the birds that were visiting and guess who came along? My two cats! Needless to say there were no birds posing on the fence any more.

Beautiful photos. Hubby has some nice photos of these little guys as well. Have a great day !

The male is gorgeous. I don't believe I've ever seen one of these.

I always enjoy your photos. I don't tell you that often enough. Thanks for sharing!

Stunning pictures.These are gorgeous birds and you show them at their best.

Oh lovely shots. Aren't they just a wonderful bird? I rarely see them around here.. so this is quite the treat.

Oh, Oh, oh! I love those birds. We get cedar waxwings occasionally, but I have never seen them like this, up close and personal! So beautiful!

Beautiful birds. And you captured then in such a lovely setting. Waxwings - I see that. Definite sign of spring - the birds returning. Our swallows are back.

Your enjoyment of the birds shows.

My bird photos are from my back yard. Take a look if you have a moment.

I'd never heard of Bohemian Waxwings before, but they are so pretty! How neat that you were able to sneak outside and get these close-ups. Very beautiful photos!

Such beautiful birds. Great photos Joan. I've never seen one so enjoy your photos very much!!

They are beautiful, we don't have Cedar Waxwings here. A little possessive about those apples huh?

What do you mean, Psycho squirrel? He was just helping out the birdies! LOL!!! Too funny!

Beautiful series of pictures, with apt comments. Cedar waxwings are SO natty!

beautiful photos of beautiful birds..we usually see Waxwings sometime in July they like the raspberries:)