1. Only 1/3 of the people that can twitch their ears can twitch only one at a time.
I  just know that tomorrow, at work.... you will take this survey. You will wander aimlessly through work cubicles and ask people if they can twitch their ears.
And then, when you finally find someone who CAN....you will ask if they can twitch them both at the same time.
And they will feel awful, because they THOUGHT they were special to be an ear twitcher, but failed to twitch two at the same time...
and then they will go home and sit in front of their mirrors and TRY to twitch them both at the same time.
And they will try and TRY and then be upset that they cannot do it.
And then you will wonder why you didn't get that last promotion at work.

2. The volume of the Earth's moon is the same as the volume of the Pacific Ocean.
Just in case you wanted to empty them both and remeasure their volumes.
Who on earth figures this stuff out?
And why?
Do we care?
Well, maybe if I was a whale in the Pacific Ocean I might be a tad interested, but it isn't like I planned a trip to the moon because it has the same volume.

So blame it on your relatives!!! Wonder if Athlete's feet are too?
Wonder if it is more common on your mom's side or your dad's? Another survey opportunity!
Send emails to all your relatives out of nowhere and ask them if they suffer from ingrown toenails. I dare you.
Because the family needs something more to gossip about, and why not make it YOU?

4. The largest city in the United States with a one syllable name is Flint, Michigan.
As a fellow Michigander, I can't tell you how proud that makes me.
Seriously.
I have tears in my eyes. 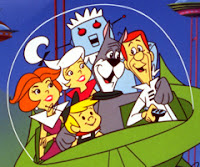 5. On the cartoon show 'The Jetsons', Jane is 33 years old and her daughter Judy is 15.
So Jane was only 18 when she had Judy???? Wow!  Wonder if she was born out of wedlock?
Maybe George kinda liked the younger women, you know what I mean?

6. In Mel Brooks' 'Silent Movie,' mime Marcel Marceau is the only person who has a speaking role.
Ironic, I know.  I love Mel Brooks. His humor, his silly satire...everything but his hair.
But I can ignore that, because usually I am laughing too  hard.

7. Only humans and horses have hymens.
No. Comment.
Except for saying: "Except for Mr. Ed" (because obviously he is a MISTER).

8. The word "set" has more definitions than any other word in the English language.
I know....you are going to look this up. Again. To see if it is correct.
Go ahead.
We'll wait.
And, if you find another one that beats it, you will have something to blog about,  right?

9. The state with the longest coastline in the US is Alaska.

And all your Californians and Floridians thought you had bragging rights, didn't you?
I would like to visit all three of these states to take photographs.  Anyone have a bed and breakfast you wanna give to me free to stay in when I come to visit you there? I guarantee I would put your picture in my blog for doing so!  O.K., Joan...quit begging so obviously, be subtle, be subtle!

10. We will have four consecutive full moons making two blue moons in 1999 (January 2 and 31, March 2 and 31.) The only other time it happened this century was in 1915 (January 1 and 31, March 1 and 31.)
You probably all knew this because of the recent blue moon that made the news, right?
And you know they really aren't BLUE, right?

These are amazing. But what is REALLY amazing is your diligence in finding them and passing them along with your unique brand of humor. Lots of laughs and hmmms with this one! Thanks!!

I want to know who the heck did that hymen check and why???

#4. I too am verklempt!
#5. Jane looks like the type that would lie about her age!
Have a good day!
P.S. Come follow me OK? I need followers!

lol. i would love to visit alaska as well...though i will not be taking a ruler...hope your travels are going well!

and I thought my husband had the most "useless knowledge" in the U.P. ~ I think we should party! See you in a couple of months! LOL

I can twitch my ears.

This makes me feel both ordinary and extraordinary.

But I can only raise one eyebrow. The other one, I break my face trying to do so.

DJan: I am sure the Hmmmms came with the hymen one. ha

Eva: hahahaaa Some horse's as-??? hahaha


Jeanette: i will stop by...we have been so busy..we are not home, we are in Florida for the birth of a new grandson. He has some breathing problems and is in the special nursery so we have been going back and forth to hospital, hotel, beach, etc.

Brian: If you go, let me know, maybe I can talk my hubby into a trip and we could meet up somewhere there..wouldn't that be fun?

Cher: yes, if you come up our way, let me know, we will definitely meet up!

Kearsie: You know you are always extraordinary, girl!!

Can't wait for a party so I can spread some of that worthless facts!!!

There was a scientific theory that the Moon was actually a part of the Earth at one time. It broke away and the hole formed the Pacific Ocean. I think they've abandoned this one though.

Interesting trivia. I am a Trivial Pursuit fan soone day, your facts might come in useful.

I love your sense of humor!

Thank you for the fact about the Alaskan coastline. Husband and I along with 2 friends are off on a trip next week and will be taking a cruise to Alaska. Now I shall be able to show off with A FACT! A x

Ratty: I remember hearing that theory...who knows? I love how all of Earth's continents look like puzzle pieces too and like they can all fit together perfectly.

Loree: Some bars have contests, you'll have to seek them out. ha

Jientje: I am so glad SOMEONE appreciates it. ha

Strawberry: You LUCKY dog! It is on my list to do someday, you need to tell us all about it when you get back!!!