An Adventure in the Woods: Beauty and the Beast

A few days ago, we took another drive in the woods to see what I could capture on camera.


First we stopped at a cemetary to check the family's gravesites, where we recently planted flowers. The flowering crabs were in bloom all over the cemetary and were just gorgeous.

Here is a pink flowering crab: 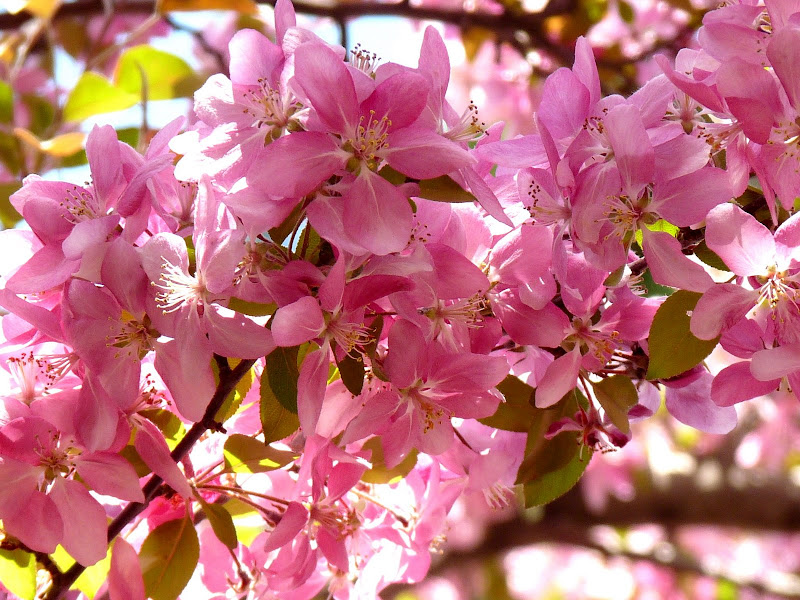 Then, my husband told me he wanted to show me a "hidden waterfall". He said he used to go fishing there a lot when he was growing up, and that it wasn't marked anywhere with signs. He said he just found it by accident one day when he was fishing his way up the river.

So I followed him into the woods. After a few feet, I had to crawl over some logs and it got a little hard for me, but he held out his hand and helped me climb over a few trees and through a thicket, and he was correct. It wasn't far and it was a really pretty little waterfall:

This is the top "shelf" of the waterfall: 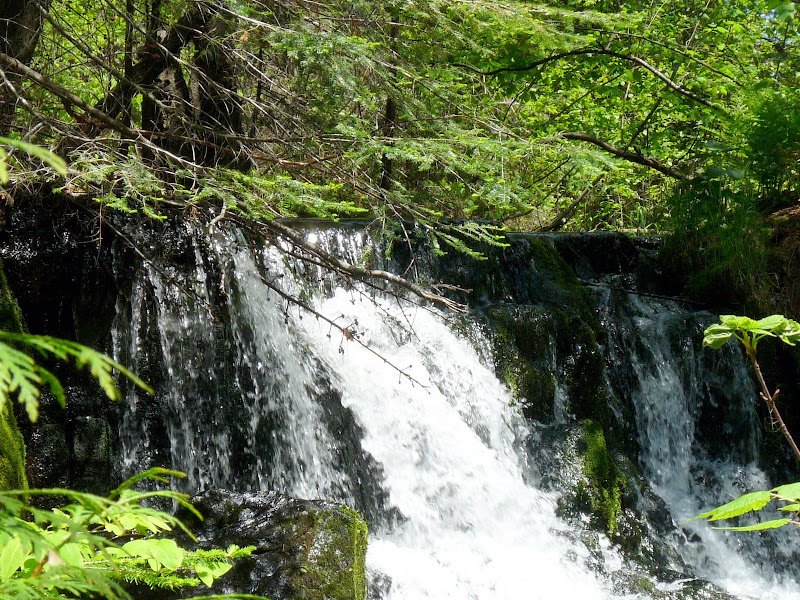 This is at the bottom of the waterfall, looking up at it: 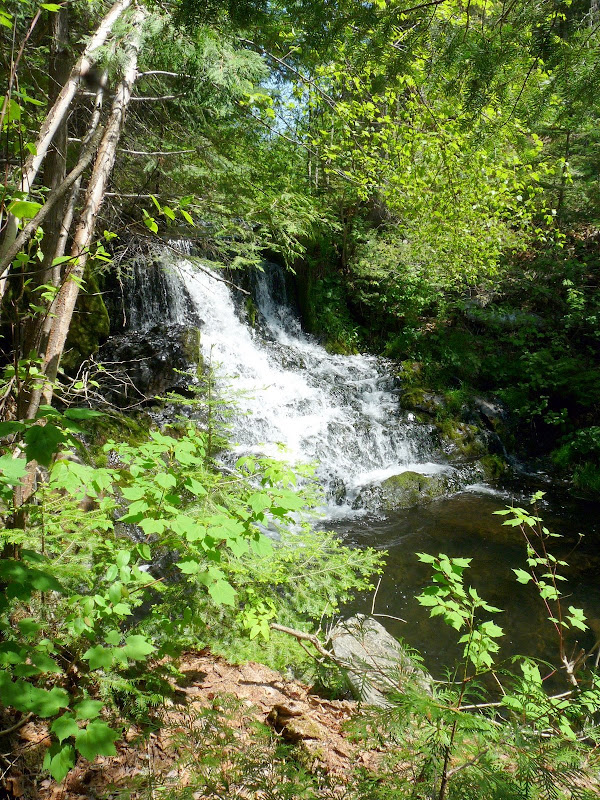 Then, there is a small set of rapids over a tiny shelf at the bottom of the falls, too: 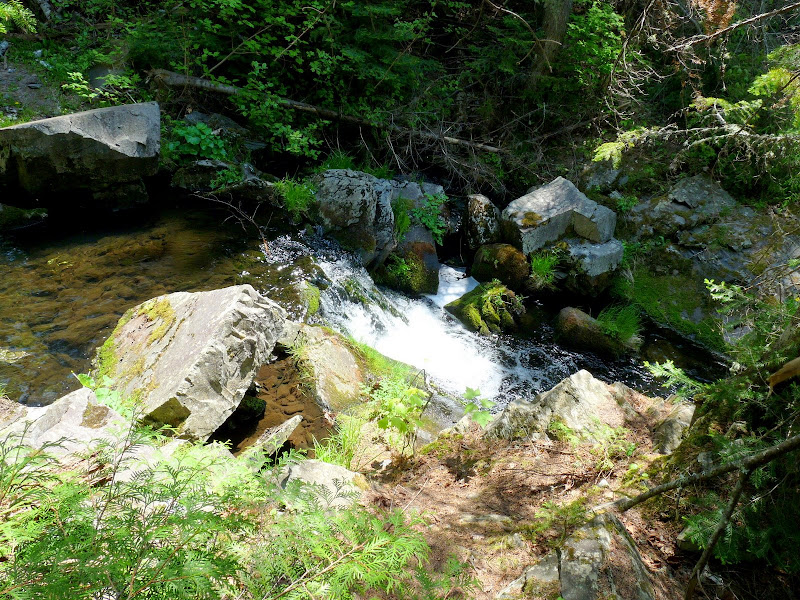 All the rocks had moss on them and it was really pretty: 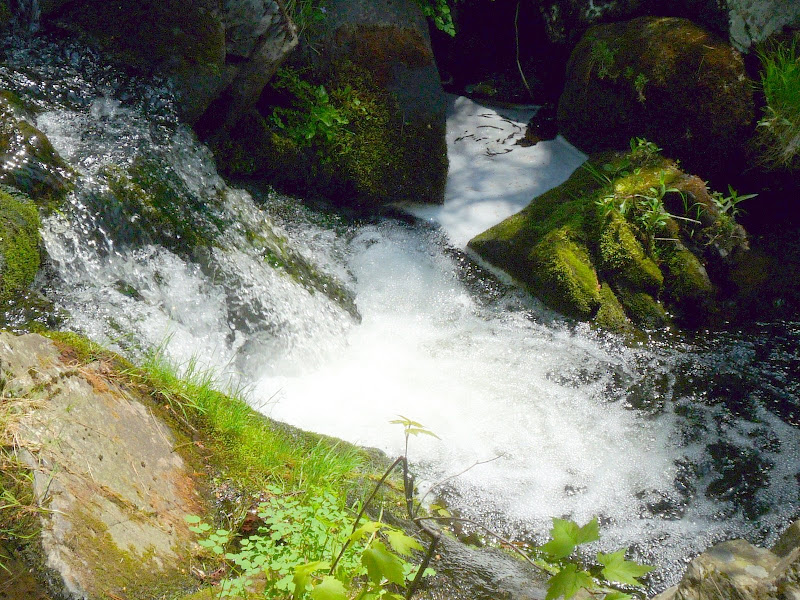 As we walked around in another spot, I saw that the Trilliums are still blooming, but some are turning pink, indicating they were at the end of their lives. These are my favorite wildflowers: 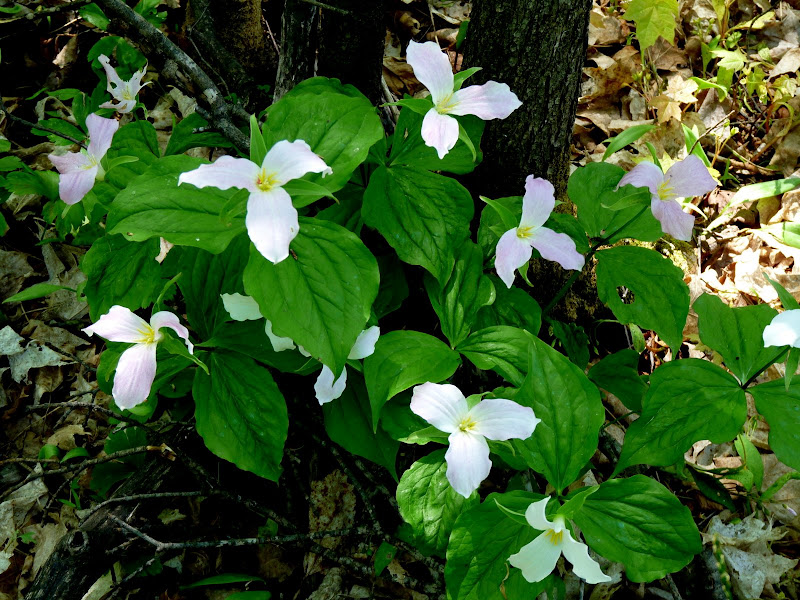 Hubby spotted these purple wildflowers. Does anyone know their name?: 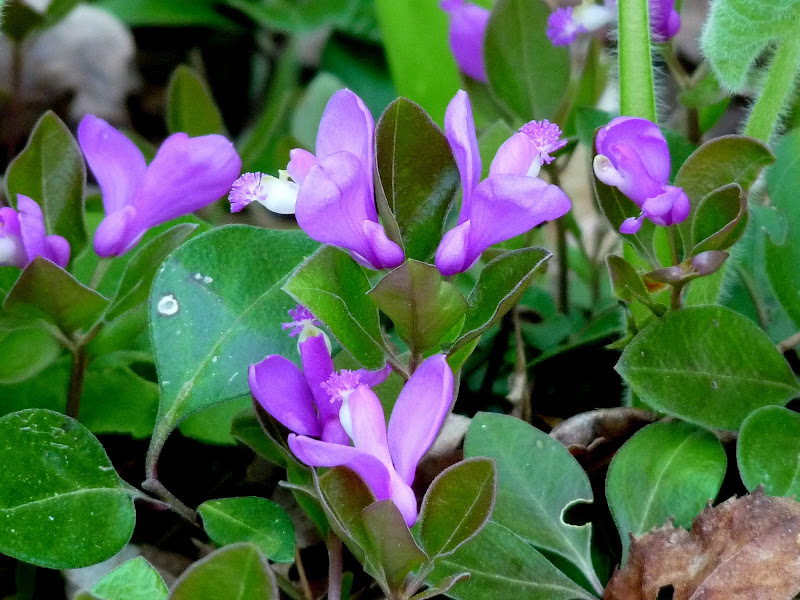 I am always on the look-out for tree mushrooms, and spotted these: 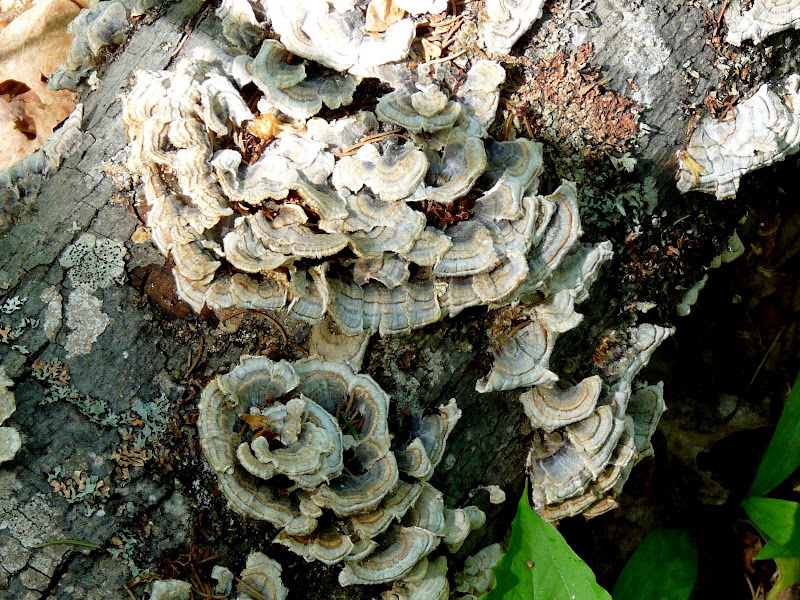 Down a river we saw this cute little cabin: 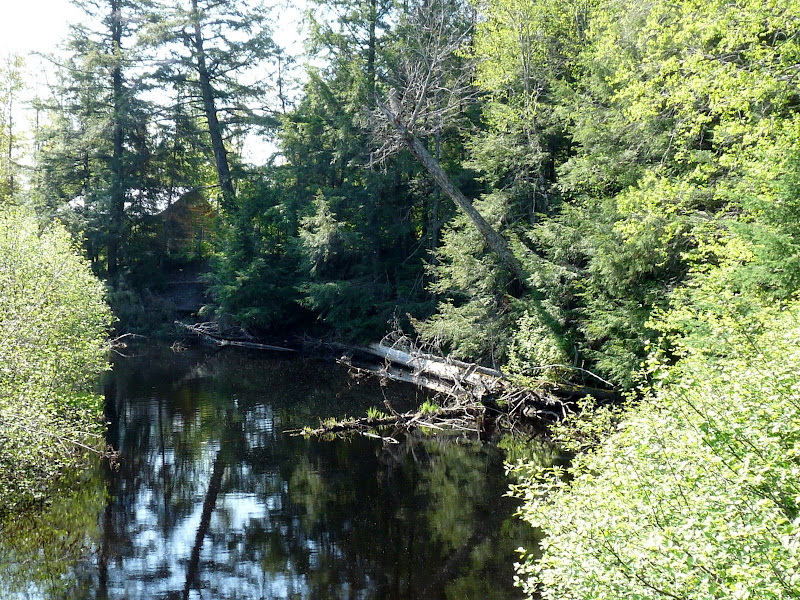 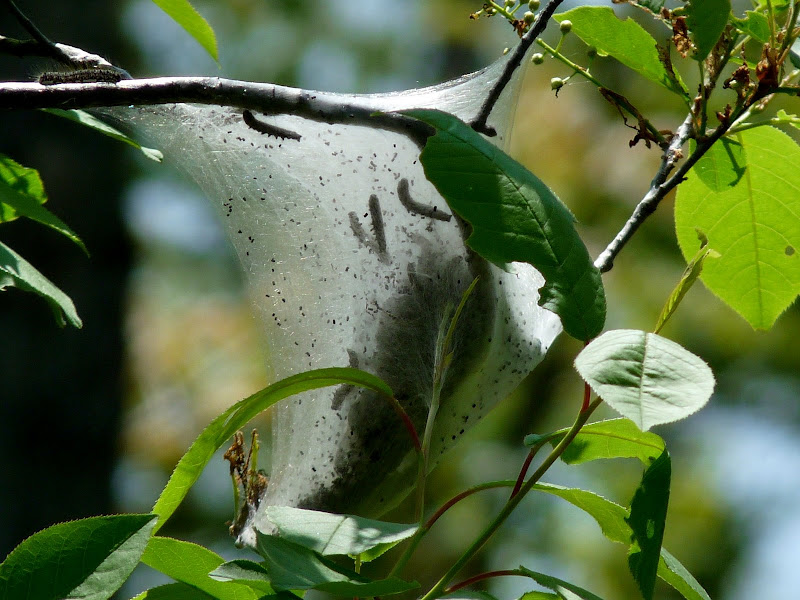 They give me the creeps. The whole "bag" was squirming and crawling with them.
There. I made you itch.
I have accomplished my mission.
After all, I saw them, so someone else has to suffer too! :-D
Posted by The Retired One at 3:00 PM

I love that waterfall! And great, thanks for making me itch!!!!

Insanity Kim: You mean the tent worms? I am SURE kids would love it!!!

Why do I now feel I have headlice?

Great pictures of the waterfall, though. I can just hear it.

When we were kids, one of those "bags" opened up and they all fell into my sister's very curly hair. I can hear her screaming even today! LOL!!!

I thought the ABORT issues were gone. I wrote my whole comment, hit the submit button and WHAM! Got that darn abort message; so try, try again!!

Anyway, yes, you made me itch and made my skin crawl. You'd think with the weather those things would have frozen off!

amazing!
Glad I'm no where near the caterpillars though!

Hi! The UP just has so many little hidden waterfalls! Your little purple flower is Gaywings, Polygala paucifolia, a springtime fav!

Fran: I know...those tent worms give me the creeps.

Joanie: Oh God! I would still need therapy if that had happened to ME !! Yikes!

Roshni: I don't go near them often..only for that one picture. YUK!

Sharkbytes: Thanks for the name of the wildflower! You are a walking encyclopedia!

Yuk we call those "bag worms" and if you can reach them you burn them. My computer is going to be full of your great pics that I keep saving for my desktop. I loved the waterfall.

I bypassed the last picture REALLY quickly! I've seen enough of them thank you.

The falls, oh my goodness, they are beautiful! Did you and hubby sit and kiss a while? You know, like lovers do? ; )

You captured wonderful photos of those flowers and your gem of a waterfall!! There are so many great things in the UP!!

Grannyann: thanks...It gives me a smile to think that my pictures are on your computer. Love it!

Shellmo: Yes, there are many, many pretty scenes to capture up here!

The waterfall is gorgeous, and the flowers

Sara: Thanks! They WERE wonderful in person too!

The violet "nameless" flowers are gorgeous!

I love waterfalls! That was great. I hope I'll find a hidden waterfall someday. I don't think there are any near me though. Maybe they're all hidden here. I like the little caterpillars too. I've been seeing these things everywhere but no caterpillars were inside of them.

Well my friend you have done it again, such beautiful, clear, vivid pictures. You really do live in a nice area, breathtaking for sure......thank you for sharing....
Have a great Tuesday.....:-) Hugs

Gorgeous waterfall and flowers. I thought caterpillars were supposed to turn into nice butterflies. I guess these are different? I have never heard of tent caterpillars before.

Dreamwalker: I thought so too. Another reader said they are named "Gaywings".

Ratty: Hidden waterfalls are the BEST! He has run into several by following the rivers fishing. There are more he wants to show me, if I can hike into them without breaking my neck. ha I don't like the tent worms, they eat the leaves and destroy trees.

Bernie: I am glad you are enjoying the pictures. I sure enjoy going out and getting them, too Nothing like being in nature!!

Loree: Thanks! These tent worms are destructive...they eat the trees' leaves and destroy the trees. Some have gone into towns and people find them up their house walls, etc. YUCK!

I've always been intrigued by waterfalls -- the sights and the sounds. Gorgeous photos!!!

Sherry at EX Marks the Spot

Sherry: You are new to my blog, no? Thanks for stopping by. I would love it if you would sign on as one of my blog's "followers".
I stopped by yours today and signed on too.
Thanks!

Great little wildflower! I have not seen that one in Minnesota. EWW those tent caterpillers are bad news. :(

Far Side: I read up on the purple wildflower...it is called Gaywings (as my other reader said)...it does grow in Minnesota..so keep looking!
:-D I hate those tent worms...they can be so destructive!