The last week of January, I was missing going out into the woods.
Bad.
We had gotten a LOT of snow, so most of the wood roads we drive to find photos
or find wildlife
were snowed over and not plowed.
But, last year, I remembered one road where they plowed year-round
and where we have spotted moose before.
I begged asked
my husband if he would take me there to look for moose.
He laughed.
LAUGHED at me, people!
He said..(and I quote): "Honey, we aren't going to see any moose now....they are bedded down somewhere
deep in the woods. Besides, I don't think they even plowed the road clear this year".
But I continued to whine politely ask until I wore him down.
So we bundled up and hit the road.
We drove about a mile or two down the usual 6 mile road and came to a dead end, huge snowbank ahead.
He said: "See? I told you they didn't plow the whole thing this winter".
But I looked way to the left and saw that they had indeed continued the plowing.
It appeared that logging was going on and someone plowed it enough for our trusty four-wheel drive to get through.
It was Sunday, and the road was VERY narrow....but I cheerfully said:
"But they won't be doing any logging today...we won't meet any trucks!"
My husband, (being a very wise and patient man):
sighed.
Then said: "Ok...but we'll just drive a little ways until we see where they are logging and where we can turn around!".
That was good enough for me.
So,
off we went.
We drove and saw NOTHING for a few miles.
I mean NOTHING.
No critter with a pulse.
Not even a bird.
We came to the first turnaround spot.
He looked over at me.
And I smiled.
And he smiled.
And he said: "You don't want me to turn around yet do you?"
I said no.
He (being the loving husband he is) obliged me. (We haven't been married for almost 39 years for nothing, folks!)
I told him: "I just feel like we are going to see a Moose today. I just can't explain it".
He said nothing.
(Did I not tell you he is a wise, wise, man?).
So we kept driving.
We got about 6 miles in the deep woods. It was getting late.
He found the largest logging spot and said: "Honey, we really have to head back..I don't want to be out here in the dark".
I agreed.
(Hey, I'm spoiled, but not dumb. I didn't want to be way out in the boonies on a cold, cold night either in the dark).
So, we turned us around....and had gone just about a half mile
and
out of the corner of my eye....
I saw movement in the woods!
STOP! I yelled.
He stopped the truck dead in its spot.
And
THIS is what I saw: 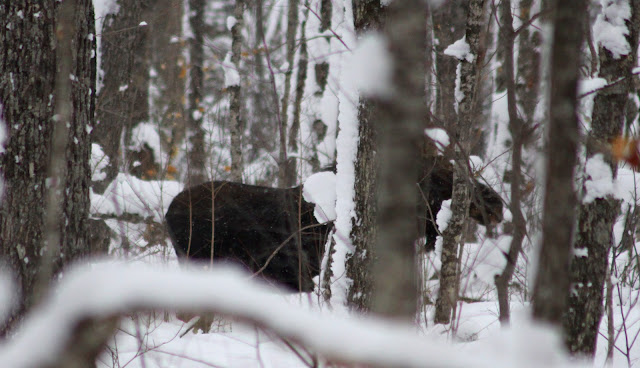 The LARGEST MOOSE
I have seen to date
in the woods!!!: 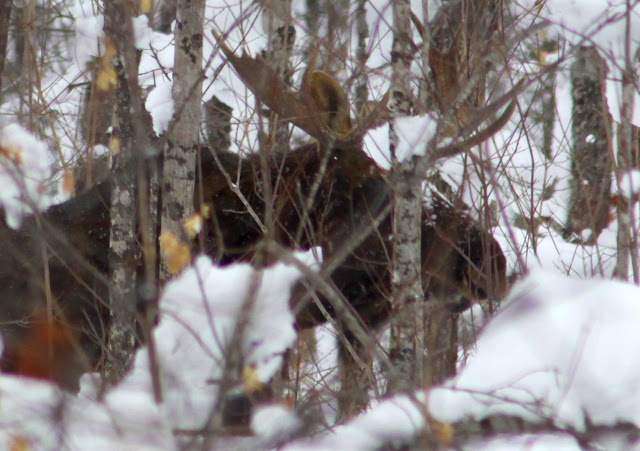 I had a hard time focusing my zoom on him
due to the many many branches in front of him.
He was WAY back in the woods!
But he was HUGE.﻿
Then....
he saw ME!: 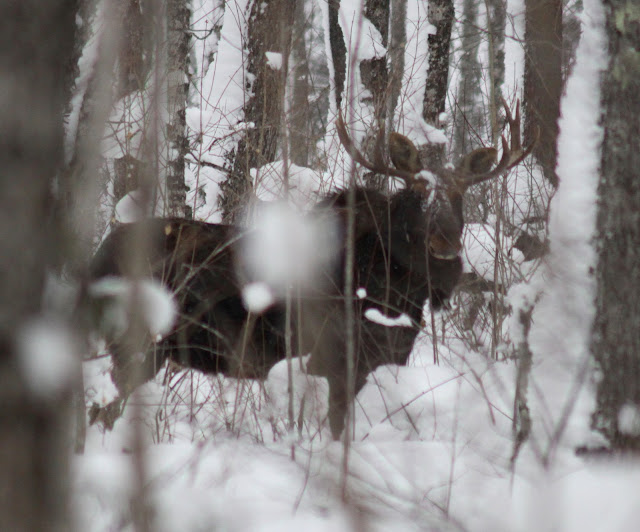 Oh. No.
He was leaving!
Here, Bullwinkle...here Bullwinkle!: 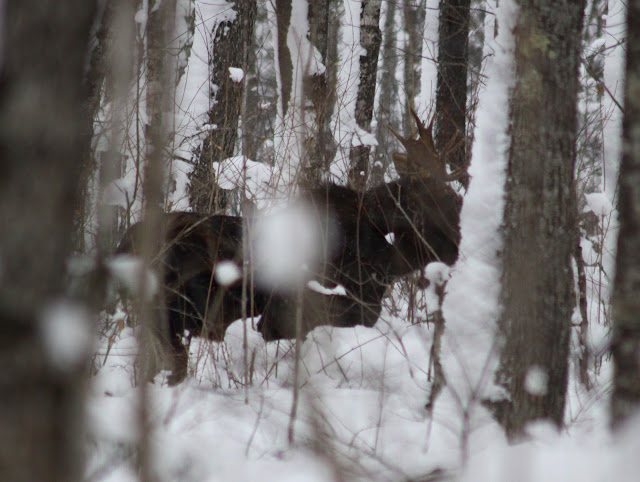 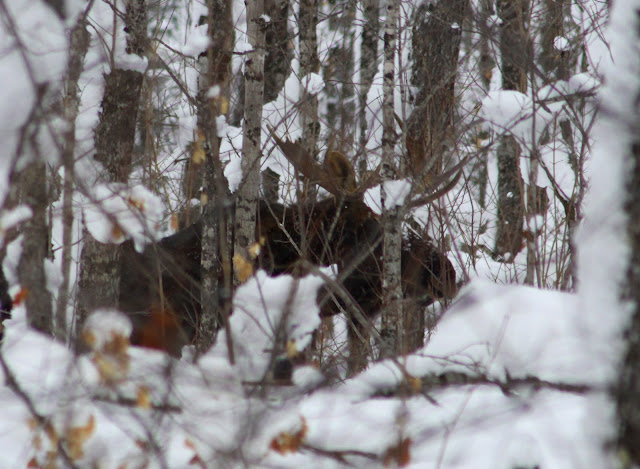 He was sooooo gorgeous: 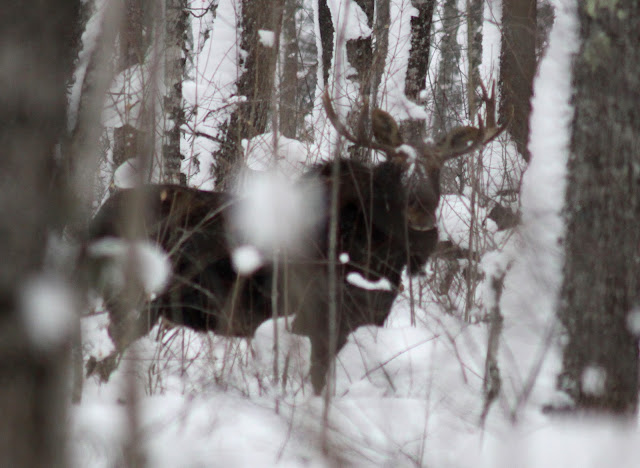 You can't tell it from this view, but he had buckets for antlers...
just huge "bowls" on each side!: 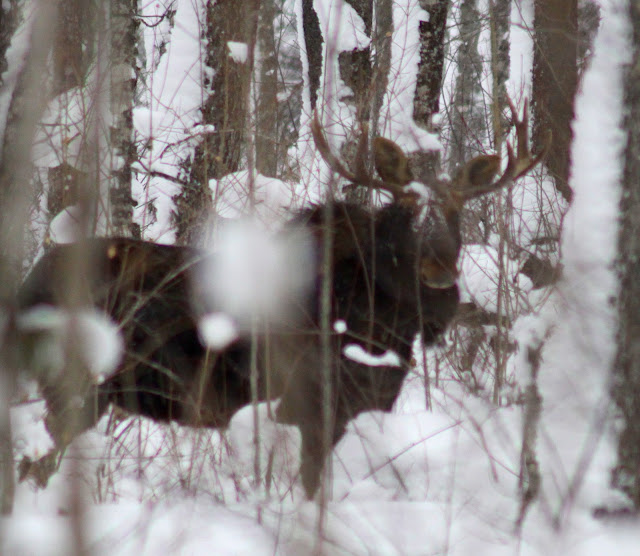 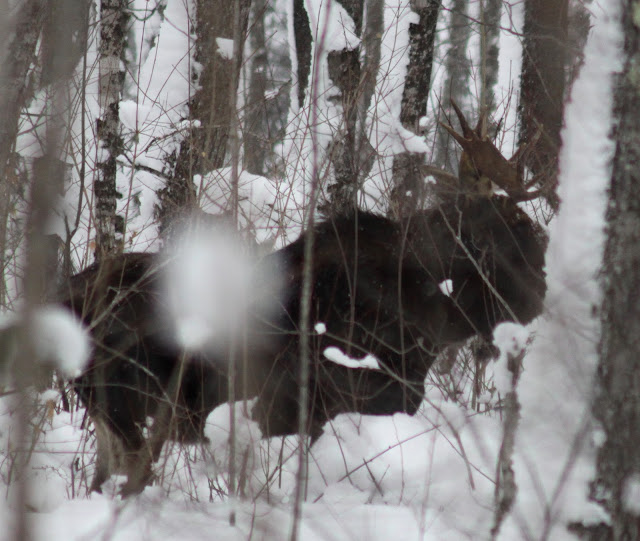 He didn't seem to like that I made him bump into a branch and
get snow on his head.
Gheesh! He is a Moose after all! What is the big deal?: 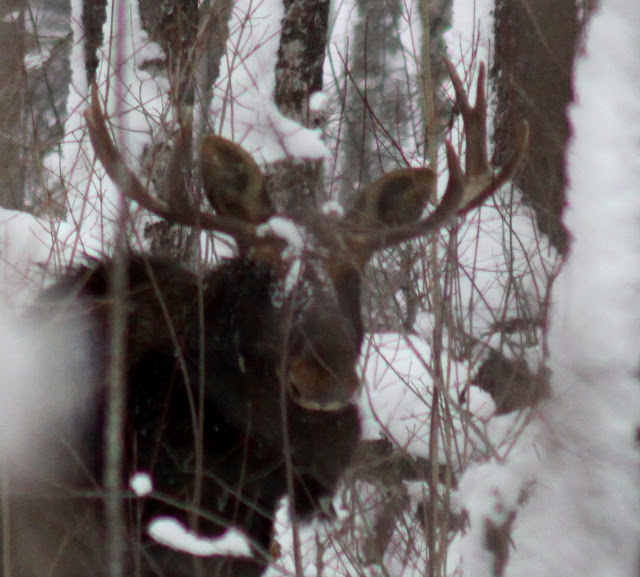 He slowly sauntered off into the deeper woods.
And me?
I teased my husband all the way home....
Guess what we are going to do again soon on a Sunday?
Oh yeah.....
we will be driving in that same spot again.
Only that big boy probably lost his antlers by now...
I will forgive him as long as he shows up
and has forgiven me for making him get snow on his head.
Posted by The Retired One at 7:00 AM

We don't get many moose around here, but from what I know, that certainly seems like a substantial moose.

Score a big one for you. My heart started to pound just looking at the pictures. I bet yours was also as you spotted this treasure of the woods. I'm happy you won on all counts. Happy hunting!

i am sitting here with a big grin on my face that lasted all the way through this story. it sounds just like me and my hubby, i did think when i read the begged/asked that i would have put whine there then i found whine further down, hubby has been known to tell me I whine when i want something. so glad you made the trip it is amazing and i wish i could see bucket horns with my own baby greens.

Oh WOW ! awesome photos ! I havent been able to get out either cause I am looking after our poor Miggy our fur baby whom just had knee surgery and she has to watched 24/7 for two weeks whilst she recovers and then after lots of theropy ! She is bouncing back really well and maybe ahead of the vets schedual !Have a great day !

so cool! i wanna see one! thanks to the hubby for taking you

WOW! I would love to see a moose in the woods! I get really excited just seeing deer occasionally on the way to work!

Lucky you! I would have never of gotten out of the truck. Maybe that's why I don't have any photos of Moose. Nice Pictures thanks for sharing again.

WOW!!! good for your persistence and GOOD for hubby for obliging :) so spoiled....
I think the photos are awesome and just wow!!!

Wow, he certainly was amazing! Great shots, and you are brave to get out of the truck!

Persistence pays.:)Great story with a very happy ending.My husband and I used to do things like this,guess now I have to be brave and do them on my own.
Ruth

You're a brave woman. If there's a HUGE moose in the vicinity, there's NO WAY I'm getting out of my vehicle. lol!

Very cool. I've never seen a moose but I have certainly had that strong feeling like I'm going to see a particular animal and I do. I'm glad you stuck to your hunch. Such a majestic critter and a well-told story.

Wow, what a handsome bull. You got some great shots Joan. Sometimes we (and our hubbys)have to listen to our little inner voices that tell us when moose and other critters are out there.

You did get some very nice photos of the moose. I am also surprised you found one as the conditions look like there wouldn't be anything out and about.

Lucky woman!!! You've got a patient hubby and a good sense of when to get to da woods!

Awesome story (what a wise and wonderful hubby ;-) )

and what a fabulous set of photographs!!

You had an exciting day on the trail. But lucky for you not TOO exciting. You're safe and sound!

Great adventure..maybe you are a Moose whisperer:)

That is amazing! You finally got your moose. Great pics.

I tried that last time I was working in Red Rock. I didn't have the same luck as you. Caught the tail end of a Linx though as it dashed away. Your photos are a wonderful catch. Too bad for hubby, eh? LOL

That is a lot of bull moose. He actually was posing. He was large alive and certainly not bedded down anywhere. Great job capture nature in action.