For years, my husband's side of the family has had a "Sugar Shack" to
make maple syrup from the sap of the trees on their land.
If you haven't ever tasted REAL maple syrup, please make it a point to do so.
Nothing else tops the taste!
So this year, when the sap started running, I asked the cousins if we could stop by the Sugar Shack
and
take some photos of the process so you can see how it is done.
They happily obliged me, and called the last day of March and told us to hurry over
because the sap was almost done dripping because of the warmer-than-usual spring days.
In order to get good sap output, the days need to be warmer and the nights cold.
This year, our evenings were warmer than usual, which for maple syrup making, is not good.
So, upon receiving the call, off we went to take some photos.
This is a picture of their Sugar Shack!
I loved their homemade sign. 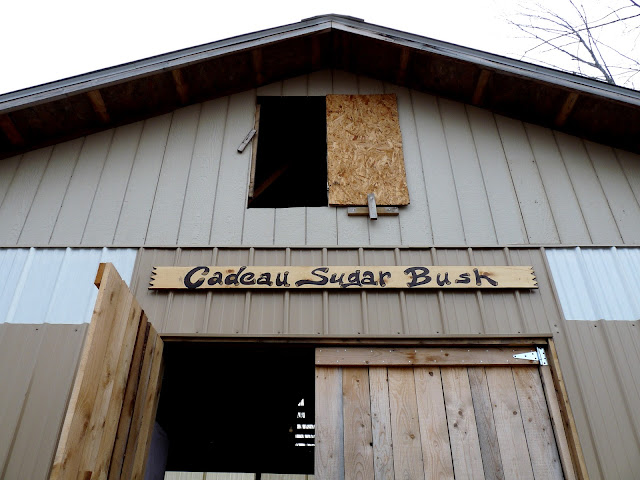 Right outside the back of the shack, was the much needed woodshed and pile of wood.
You need this to keep the fire burning to boil down the sap into the syrup: 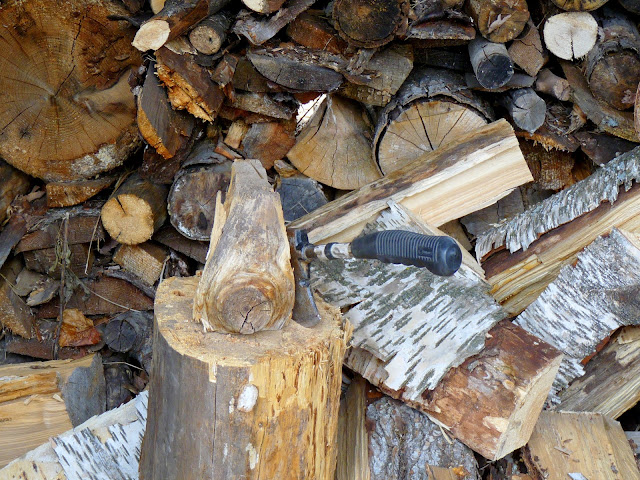 And some other tools you might need?
Snowshoes!
Because often, when the sap begins running, there is often a LOT of snow still on the ground: 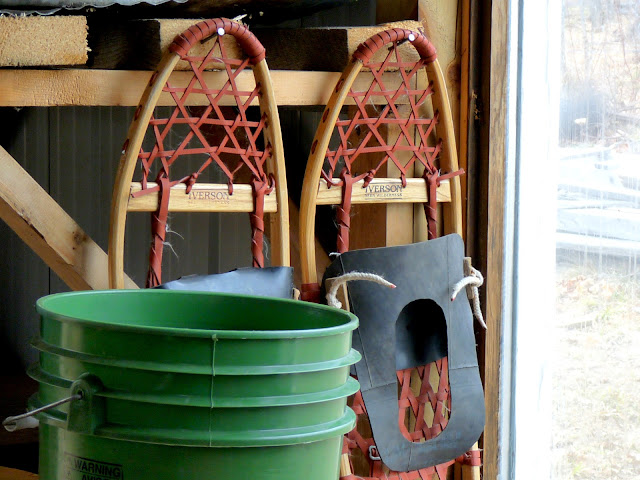 You can gather the sap from the trees in several ways.
Usually, you can just tap the trees and hang a bucket and the sap can be gathered there.
You  have to go and get the buckets and pour them out every day: Here is a closeup of the tap in the tree, yielding the yummy sap: 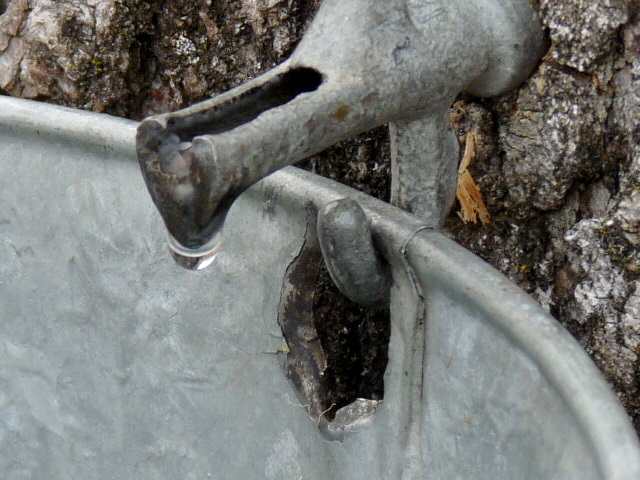 But, the fastest way, is to use runs of lonnnnnng tubing that twist through the woods and connect downhill: 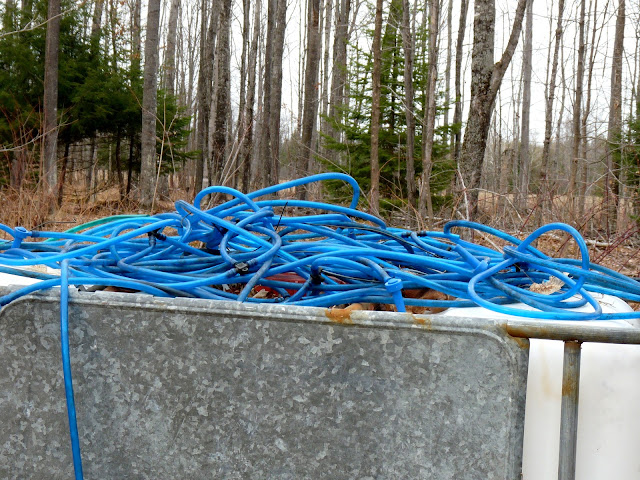 See how the tapped tree is hooked to the tubing instead of dripping into the bucket?: 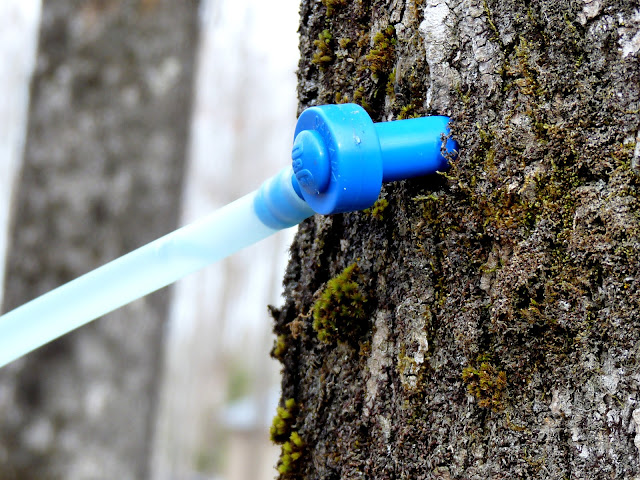 The buckets are downhill, where all the tubing runs the sap into larger buckets.
Some Sugar Shacks have the tubing run right down into the Shack and into big vats where it can be steamed: 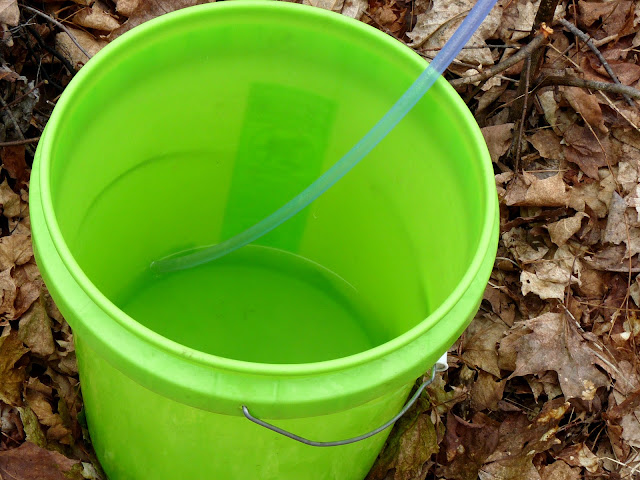 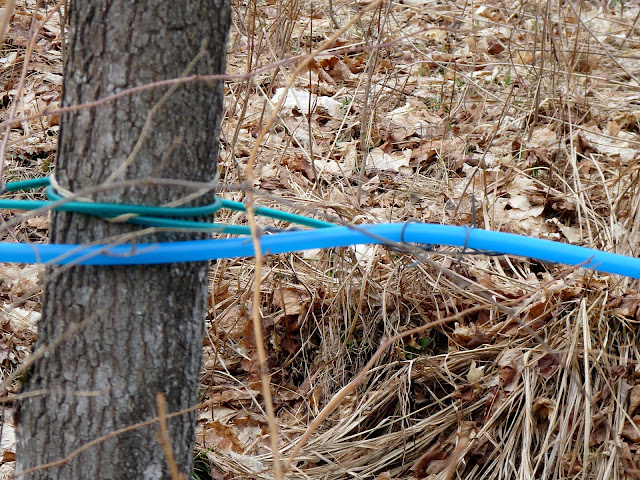 See all the tubing running from wayyyyyy up the hill on all those trees?: 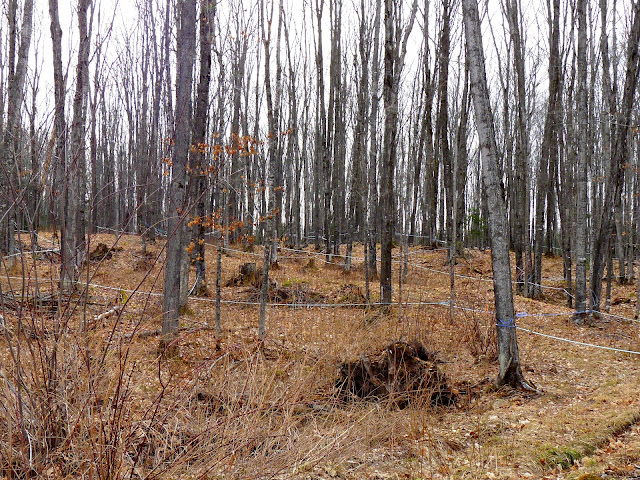 (Isn't  that amazing?)
Here is a photo of some of the large vats where the sap is stored before being boiled down in the steamer: 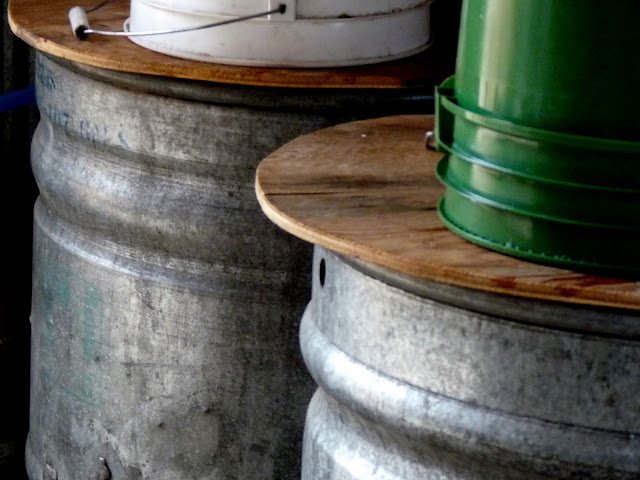 Here is some sap that has been in the steamer a while. YUMMMM!: 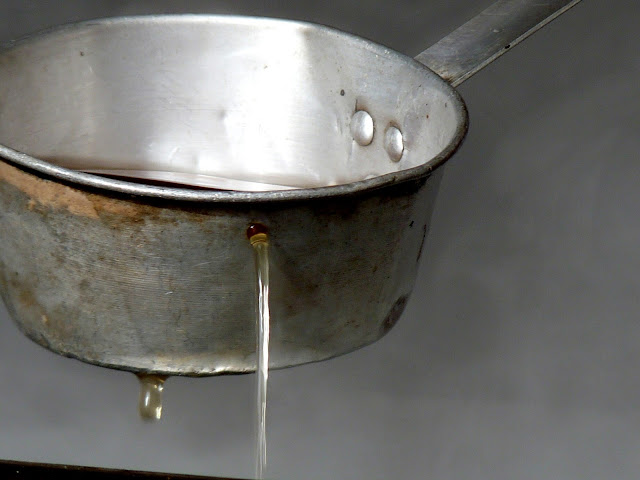 At the Sugar Shack, they have a large steamer and also use small stoves to help boil down the sap too: 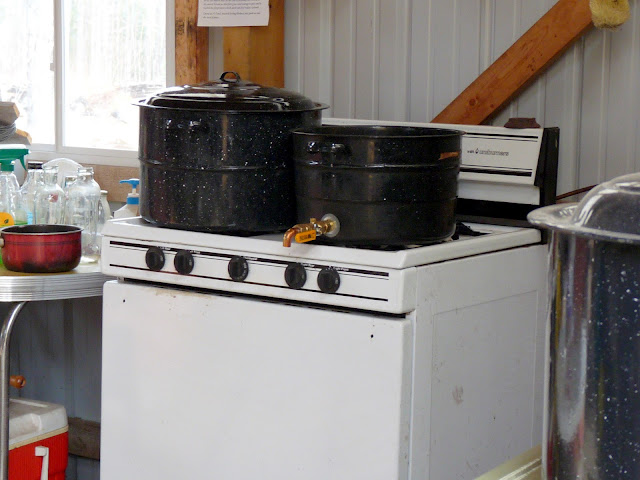 Here are the Sugar Shack owners, Mary and John, standing by the BIG steamer.  Aren't they just the cutest??: 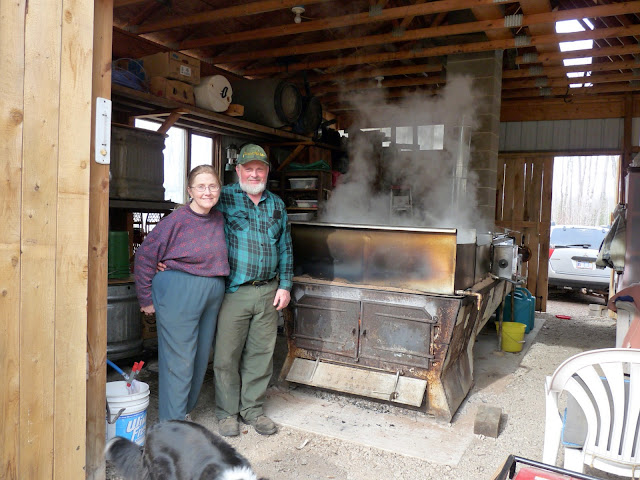 (And they are as sweet as the syrup. Genuine, sincere and sooo nice.)

Here is John by the steamer. He asked if I wanted a "ghost picture" of him behind the steam. :0} 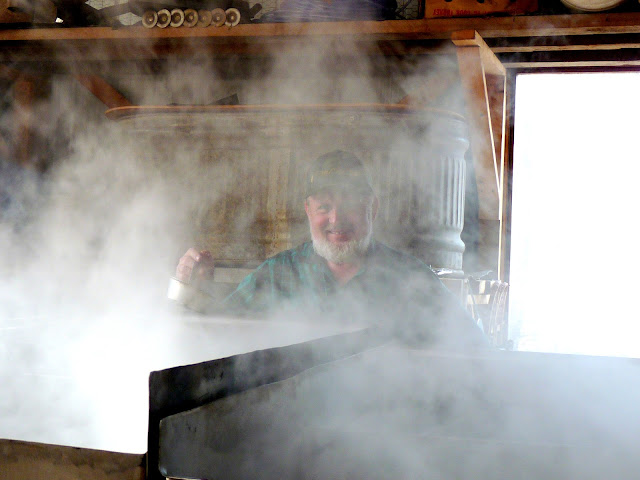 Checking the syrup. Is it done YET???: 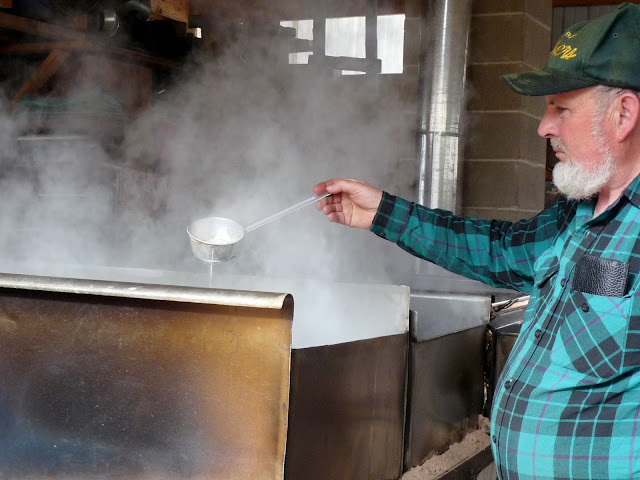 I thought the large steamer was amazing!
What was even more amazing is that our cousins took an older steamer and made it into this gigantic one all by themselves and set up the Sugar Shack to be a well-oiled operation!: 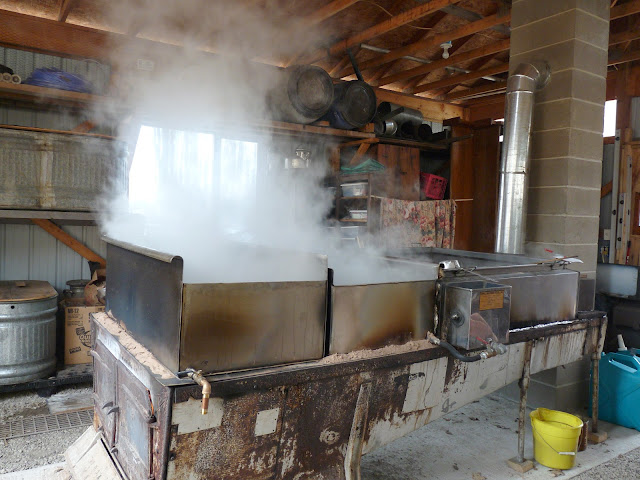 The secret pantry full of little bottles of finished syrup!!!: 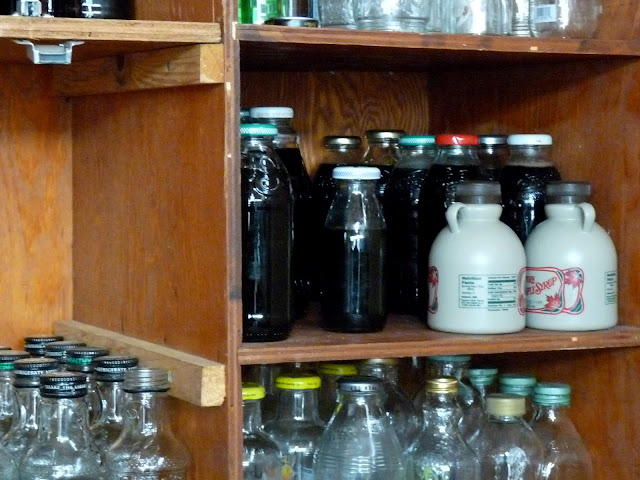 And did I leave empty handed?

Even though it was a bad year for output, they gave us a bottle of syrup to go home with...
to which I was SO grateful.....

Guess who's  having pancakes these days???

great pics. we love maple syrup and go to the festivals every year...there is nothing like it, that is for sure...

Thank Joan! That was really cool!!

Thank you for the tour and the great pictures, as usual. I love the "ghost" picture, too, and was surprised at how clear the sap is in the beginning. Very interesting, I've never seen it done, but I've sure tasted the result, and you're right, it's wonderful!

Brian: they have done this for years, but we never got out there to take photos...we had such a good time that day and it was uncharacteristicly 78 degrees in April in the U.P. that day we went...unheard of!!

Joanie: you are welcome..we loved it too.

DJan: it is amazing and once set up, you just boil down the sap to get the best maple syrup ever...we did it once at home when the kids were little....we hung buckets and every day after school the girls would empty them and I would boil it down when they got enough to do so...they still talk about it as adults...they loved it.

You have done something similar to what we are doing here: rubber tapping.

As a kid, I had maple syrup my dad made. We didn't have a big commercial operation, but we did usually make enough to last a few months for the family. I loved it when it was boiled down past the syrup stage and became like taffy. It was great on toast! Thanks for the memories!

There is nothing better on pancakes.

Great post. There are places like this near me and I wanted to go for some maple syrup but I forgot. :( Being from California I've never been to a sugar shack. Next season for sure!

I loved this post. I had no idea how maple syrup was made.

Rainfield: Please post some pictures of rubber tapping on your blog..I bet your Followers would LOVE to see the process!

Bossy: so glad you liked them!

Eva:Oh, yes, I have tasted the maple sugar on the bottom of the pan...the BEST!!

James: go and see it,it is fantastic to see and smell!

Jientje: Really? you have to visit somewhere in person someday and see it all being done...it is quite amazing!

Finally I know how this superb Maple Syrup is made, illustrated with your great pictures, Joan! Thank you!

I'll bet it smells wonderful, too! Thanks for sharing!

That tubing is a neat idea. I knew that the sap was collected in buckets that were hanged on the trees, but I didn't know that there was an even better way. This post is like a fun tour of making syrup. This is the kind of thing I like watching on TV. I'm a sucker for those shows where they walk you through a factory or place like that.

Susanne: you are welcome...it is a simple procedure but lots of work to gather the syrup from the trees.

Quack: Oh yes, the steam is very sweet and it does smell wonderful.

Ratty: I love those shows too..glad you enjoyed the tour!

Loree: Thanks...I am amazed at how many people didn't know how it was gathered and made!

That is just SO interesting, Joan.... I never knew all that went into making that delicious syrup.... Save me a bite of your pancake!!!!

Thanks so much for sharing this.
Hugs,
Betsy
Got a baby yet????

It's so interesting to see the process of it all. Hadn't really given it any thought before. I love all the photos too. A

Great photographs of the process..I would guess that they don't have a deer problem with the stringing of the long hoses:)

Betsy: I love natural, real syrup instead of corn syrup...there is no comparison. Yes, we have baby...he was born 4/28 around noon..but had a real rough start...respiratory distress due to cord around his neck, and aspiration pneumonia. He is doing better today, but is still on IV antibiotics. We are praying for him.

Strawberry: So glad you liked seeing the process!

Far Side: thanks...I guess I never thought about the deer having to hop over all those tubes before. ha

I am amazed at the tubing, that is a wonderful idea and far more effective. I had just imagined a bucket brigade to get the sap to the shack. I have had the real thing but I've never seen the process, it is fascinating.

SquirrelQueen: I know, when I first saw that type of sap gathering, I thought, how ingenius!!!

I want home made maple syrup!! I love the pic of the handmade sign! So awesome!

Joan!
What a fantastic bit of journalism!
I loved the tour and the details. I felt like I was looking at, and reading a magazine!

Brittany: I know, wasn't that cute? I love my husband's cousins..they are genuine folks!

Pat: Thanks so much, Pat...it is so neat to go there and see it in person too!