Yes!  It is time again for MORE DUMB STATE LAWS.  Along with MY COMMENTS in bold italics.
This time?
The wonderful State of IOWA~ 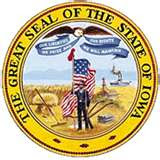 2.  One-armed piano players must perform for free.
Now this law just made me giggle! How about you?  The poor man/woman who only has one arm and plays the piano? That is a miracle in itself....but then..they don't PAY him/her????  Good grief! That is beyond cruel.  I bet (s)he could find away to give "the Hollywood Salute" with that one arm if they don't pay!

3.  Kisses may last for no more than five minutes.
No fun. I guess there is no "making out" going on in Iowa, then? And who gets to time the kissing? And you better NOT have a moustache if you are kissing either!

5.  In Dubuque: Any hotel in the city limits must have a water bucket and a hitching post in front of the building.
And Trigger...don't forget Trigger.  Maybe they will need a "Pooper Scooper" in Dubuque for all the horse doo-doo then?

6.  In Marshalltown: Horses are forbidden to eat fire hydrants.
Yessiree...lots of horses must be in Iowa.  And they obviously need to feed them better...poor things are so hungry they need a law so they don't EAT fire hydrants!

7.  In Mount Vernon: One must obtain written permission from the City Council before throwing bricks into a highway.
Yes....make SURE you get a City Council permit to be a vandal!

8.  In Ottumwa: Within the city limits, a man may not wink at any woman he does not know.
Again, NO FUN!  How's a guy supposed to pick up a woman then? Cripes....he can't have a moustache and kiss a girl in public....he can't make out for more than five minutes...gheesh.
I guess he could go buy some bricks and throw them on the highway (if he gets a city permit).

Wow, we are already up to the I's? And you do have to wonder why these laws are written in the first place, don't you? Thanks for the morning giggles.

DJan: Time flies when we're having fun. ha I'm glad I gave you morning giggles...that was my goal! :0}

horses eating fire hydrants must be a sight to see...and i am not shaving, so i guess i will be requesting my 5 minutes of kissing time from jail. lol.

I'm sure the moustache law must have had something to do with preventing the spread of STDs. You know those moustaches must be a vertiable breeding ground for bacteria!

I was laughing so hard! My favorite is the boozing minister one! Have a great day!

This pretty much rules Iowa out for a fun place to go for me and the Hubs.

Because my 'stache gets in the way of carrying booze across state lines, especially when I'm hungry for some fire hydrant.

Funny Joan.... I laughed and laughed... Can you imagine anyone EVER getting permission to throw bricks on the highway?????? ha ha ha
Hugs,
Betsy

Bossy: They all are doozies, aren't they? ha

Eva: Ha...you can always disinfect after every kiss! :0}

Sara: Unfortunately, I have known of some boozing ministers in my day. ha

Kearsie: Don't be eating any fire hydrants...I hear it is rough on one's teeth! (Even if you were to look like Mr. Ed.)

I know for a fact that number one is ignored. But maybe they don't count it if he also has a beard. I'm not sure how that five minute rule works though.

That one about horses eating fire hydrants sounds sensible to me. It would probably ruin their teeth.

Ratty: For a fact, huh? and how do you KNOW that? heehee I bet the old firehydrants were made of wood and they were more worried about the hydrants than the horse.:-}

Iowa seems to be against all the fun stuff like kissing and winking. Kind of takes the fun out of things huh?

Maybe the ministers of Iowa all have moonshine stills, if they want to move spirits they need a permit.

I am so loving your state laws series. Did you do one on Alaska? I'm going to look for it.

Not too many crazy laws in Iowa. I suppose it's a good thing. I never thought a horse would actually eat a fire hydrant. Must have been a very hungry horse. LOL

Squirrelqueen: Yes, I already did Alaska..I am doing them alphabetically. To find the blogpost,go to the very bottom of the posts on the page and you will see a Lijit box. Just type in Dumb state laws: Alaska and it should bring you to the exact blogpost I wrote about it. If you can't find itthat way ,let me know and I will give you the web address.

Loree: He must have needed more fiber in his diet,hahaaaa

Joan, Try the video link on my blog again. I re-did it. Hope it works this time!