Today I am going to show you the fabulous WHALES
that come into the Los Cabos area every February!
It was one of the one things I wanted to do on this vacation...and besides the gorgeous rocks
at Land's End...the reason I wanted to go there.
A few years ago, we went to Puerto Vallarta and got to see whales too, but this time
we got to see so many more and much, much more up close....
When I was looking on line to plan our trip they advertised several different ways to go whale watching, and some combined riding around the rocks of Land's End...
PERFECT! (I thought)....I can go out on one of those nice yachts cruising and take my camera and maybe a dinner cruise and do everything I dreamed of...
So,when we got to the resort we met with the FunJet representatives to learn about the various tours they offered.
We almost did the sunset cruise with dinner...but then I was thinking of the lighting....as beautiful as the prospect was of photographing whales and the rocks at sunset was...I had noticed that the sunset was way the wrong direction for good Land's End photos from all sides of the rocks...and the dinners at the resort were already paid for and really good...so we looked into a non-meal boat trip out instead.
They had a reasonably priced trip going out for over two hours that included a close up trip all around the rocks as well as whale watching...and the guys left it up to ME as to booking it.
I did.
THIS is the boat I thought we'd be going out in: 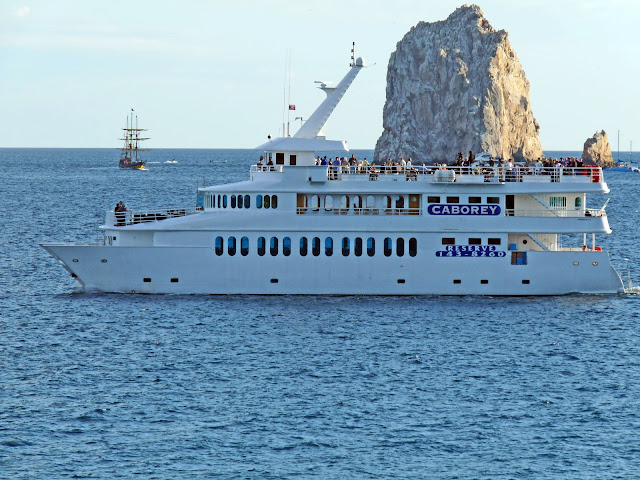 So....after a lovely ride into the town of Los Cabos, we arrived at the pier.
I was very surprised to see that Los Cabos was a quaint, smaller town...it was once just a small fishing village of about 300+ people, and due to tourism, now it has grown.
The pier area was a small little bay.
When I got there, I did not see that lovely yacht.
Hmmm....I wondered.﻿ 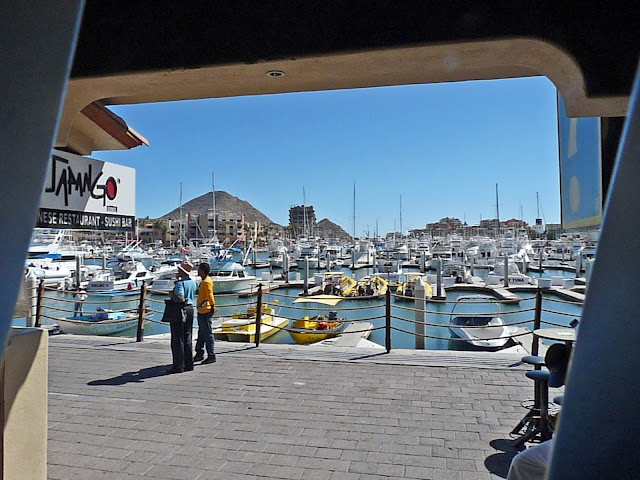 Our friendly boat guide men (all TWO of them) gathered us up together (about 8 or 10 of us)
and walked us down the pier to OUR boat.
See those TINY, yellow banana type boats in the middle of the photo above?
YUP. You guessed it...
THOSE were OUR whale watching boats....﻿ 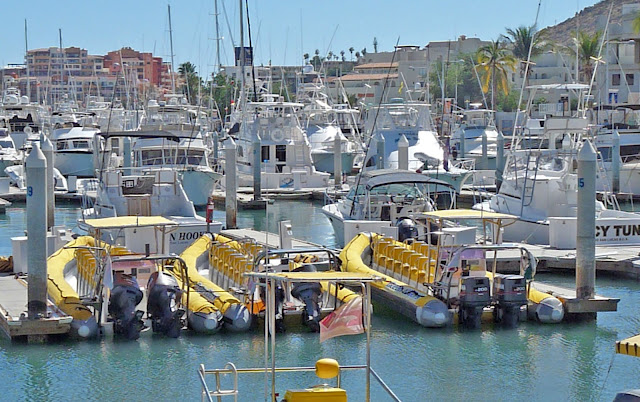 I began to get a BIT scared.....
I mean...do you SEE the size of the boat?
Do you KNOW the size of a whale???
We commenced to get into the boat.
They literally had SADDLE seats with one bar in front of each seat to HANG ON TO.
(Did I mention I planned to take PHOTOS???)
(Did I also mention yet that it had TWO hundred horse boat motors on the end of the boat?)
We leisurely cruised out through the pier, taking in the sights....
Then we got to open ocean.
They OPENED up both motors to full blast.....
And????
WHOOOOOOO-HAAAAAAA....!!!!!
It was like an amusement ride!
Slapping against the huge ocean waves, off we went looking for whales......
(They did slow down when we went around the rocks later, much slower....thank goodness!)
Anyway...to make my long story even longer....thank goodness ONE of our boat guides also took photos as I was bumping to and fro and did NOT get very many whale pictures of my own!)
In fact, I had to guard the camera from getting soaked and not crashing into the hang-on bar...and I had my phone with me too because I had planned to take a video with my phone when we saw whales...
(yeah, right...silly girl!!)
But at the end of the tour, they offered a CD of our whale watching tour for sale....
and I bought one.
So most of the pictures below were taken by our boat guide.
When I got the CD many of the photos had crooked horizons (no kidding..he took them on the fly!) so I have now straightened them and adjusted a little lighting in them to make them nicer so I could show you.....but he did a wonderful job capturing what we saw on the tour and I am very grateful he did.
I did NOT enhance the size of the whales you are about to see or how close they were to us...I left as much of the whale photos as natural as I could....
That being said...
Hang on....(just like I did!) because
HERE WE GO>>>>>>>>> 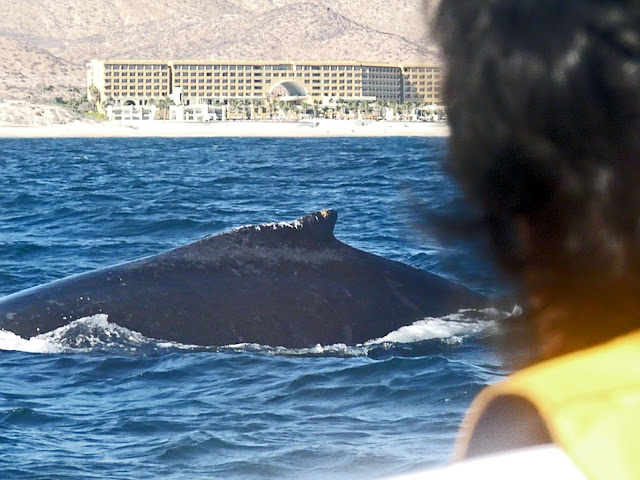 (yes, the lady you see is in OUR boat. That is how close the whale was!) (the lady is not me)

THIS is me (blondie) and my husband behind me.
Our traveling companion (didn't you know I ALWAYS have two men with me at all times? LOL)
is the man right behind my husband.
He used to be my boss....(although he says I used to be HIS boss). (Giggle). Now? I am retired and he always says he envies that.....However now, I am his volunteer travel planner.
﻿ 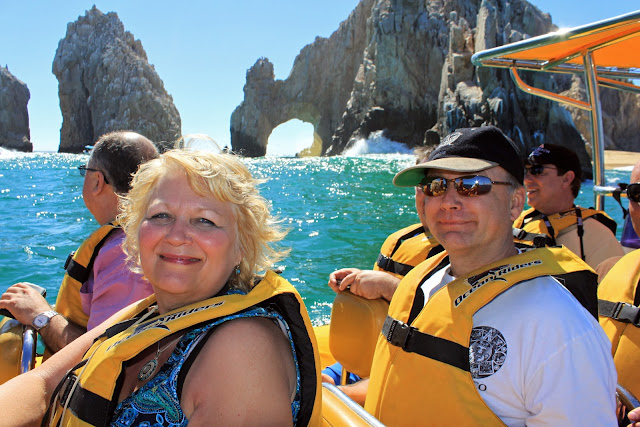 Every whale we saw was a separate thrill for me. 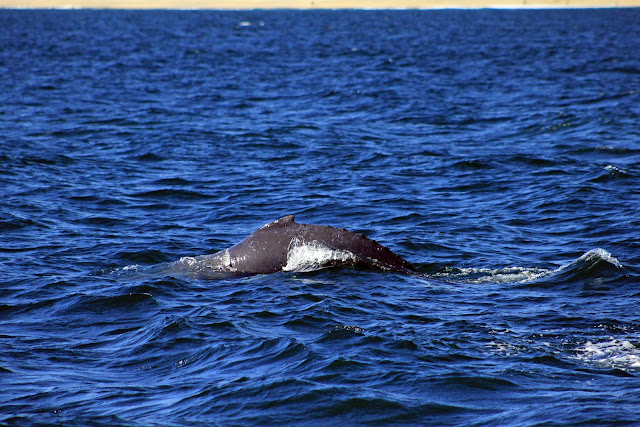 And when they blew out air!!! It was FANTASTIC!:﻿ 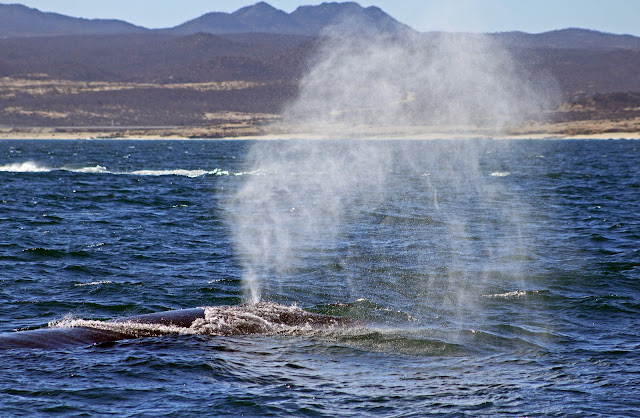 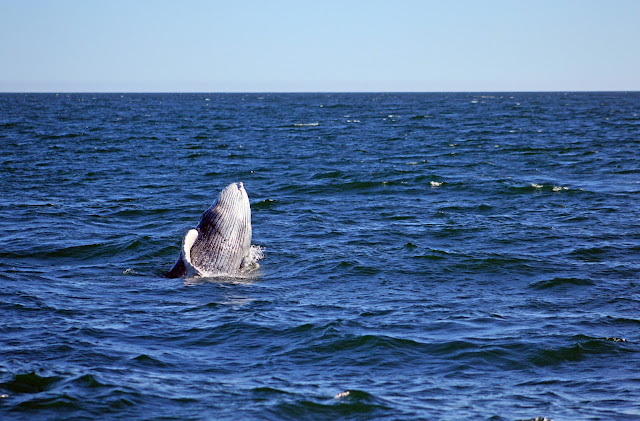 Gorgeous!!!
Stay tuned, as I have MORE whale pictures to show you next time....
And? The end sighting of the tour was the BEST surprise....
Posted by The Retired One at 9:07 AM

What great photos!!! And you are gorgeous!

GREAT pictures! And that one of you and your two men is fabulous. I also straighten the horizon on all my pictures; they are always off by two degrees, listing to the left. Wonderful adventure, Joan!

I liked the story more than the photos for once, hilarious and fun and great shots and you look way to young to be retired. fun story

too cool!!! my favorite part was seeing your sweet face! :)

Much as I am one to stay on land,i would venture out on the water to see this sort of thing. These are amazing creatures.

An adventure of a lifetime, what an amazing experience, not just the whales but the ride!

Hahaha, what a great adventure and you wrote it so lovely that i am laughing all the time.All the photos are beautiful...and the husband is handsome, sorry the former boss was not fully shown. Here in our country we have also tours for whale sharks called butanding, the dotted ones. And people can go down there near them in the vast ocean. thanks.

Whoa what a ride. Not the best for photography but good to keep you young at heart. You look pretty youthful too.

Wow! That was up close and personal. I went whale watching in Puget Sound last summer, but it was in a big boat, and not nearly so close.