This is part two of a late winter hike into Canyon Falls.
If you missed Part One, just drop below this post and you will find it.
The river had begun melting.
Which meant only ONE thing...
perhaps the falls were now visible under all the snow and ice at the end of the gorge.
Perhaps  NOT....
So, we hiked on and heard water rushing.
Lo and behold, through a tiny fissure in the snow we saw running water: 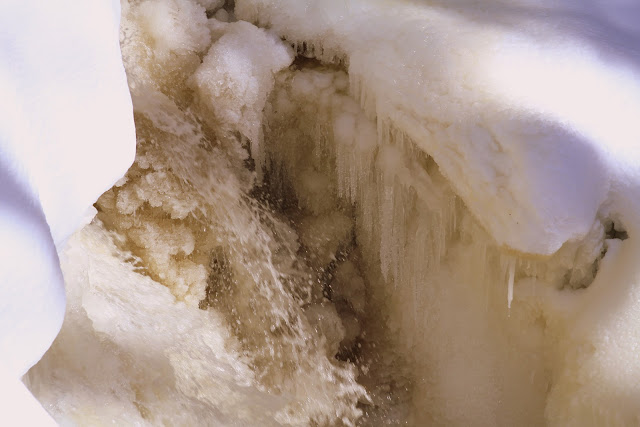 
And the icy cliffs beside the falls still had clinging snow and ice: 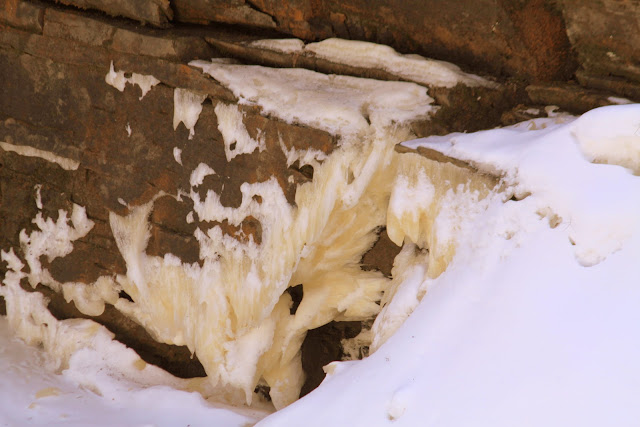 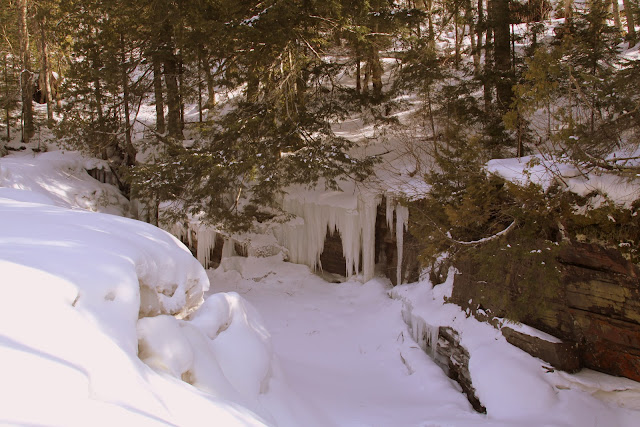 The falls were running, but only in a small cracked area of the snow and ice: 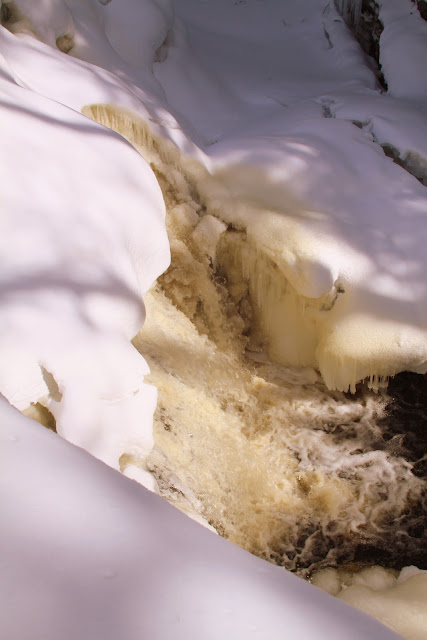 I had to climb over a safety fence and lean
wayyyyyyy
over to get this shot.
(No one should try this at home).
The weirdest thing happened.
We were out there about 14 hours after the big earthquake in Japan.
And RIGHT as I was leaning way over the cliff (with Paul holding on to my coat hood should I slip)
we heard and felt this tremendous rumbling in the rocks...
it sounded like thunder but the sky was clear blue...
He grabbed me to the fence and said "get back!!"
so I scurried (as much as a fifty-something old  year old can scurry)
back over the fence immediately.
The only thing we could think of was that it was, indeed the rumbling through the rocks from far away Japan's incidence.
It was very weird.
And scary.
So, I stayed in safe distance from the edge from thereon.


This is the last shot I got whilst on the edge: 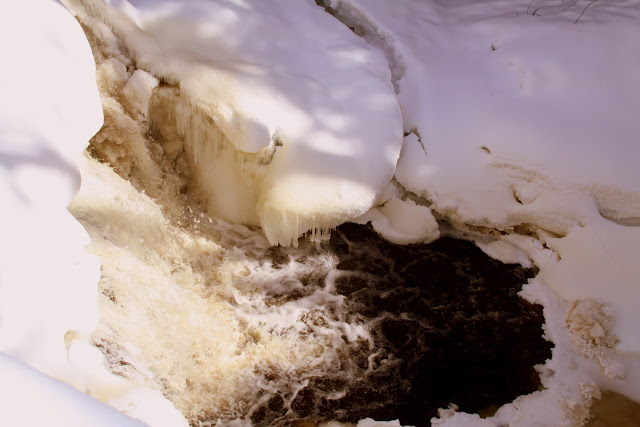 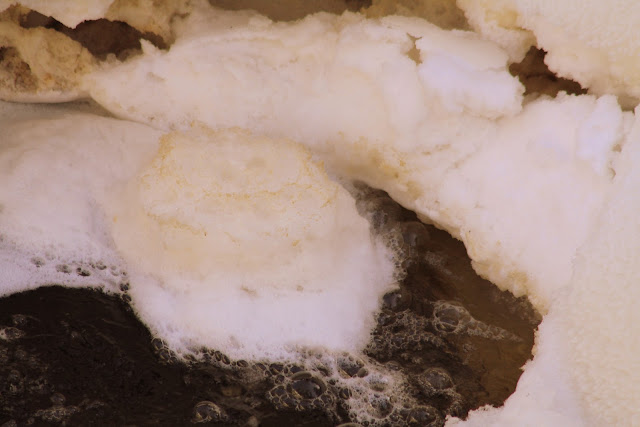 Loved those gynormous icicles on the opposite cliff: 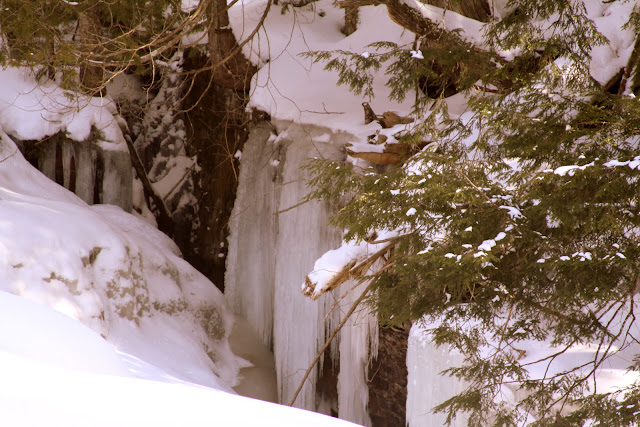 And the ones hanging over the water: 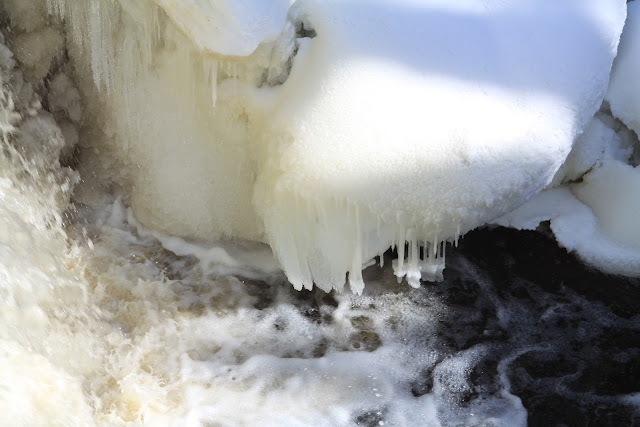 I love snow and ice in black and white: 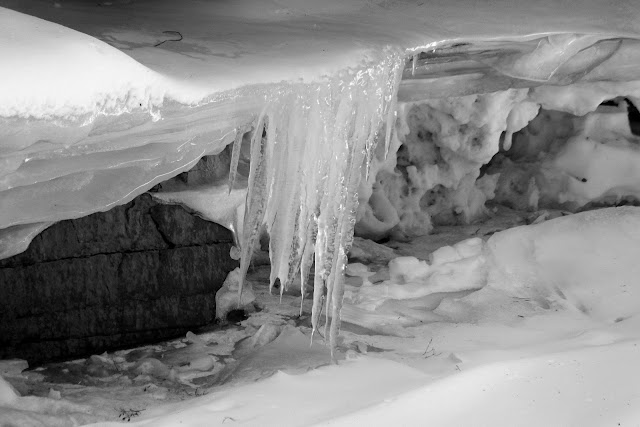 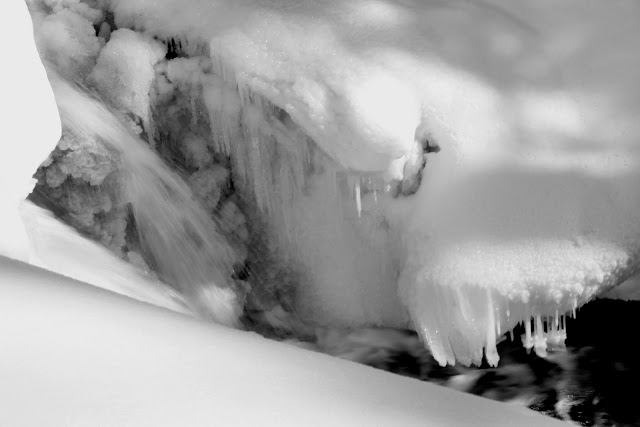 Dont want to see that stuff till next winter brrr lol Wonderful photos ! Have a good day !

haha...thanks for braving that cliff edge for us...it was almost 90 yesterday and i am rather pink around the edges and snow seems so far distant...

Oh goodness..that must have been scary!! I remember when we were at Canyon Falls I was leaning over the fence holding my camera out as far as my arm could reach to take a picture. All I could think was that if the fence broke....shudder!

Lovely photos and I too love snow and ice in black and white...seems to make them more real somehow.
Sandi

oh my, i have this picture in my mind of your husband clutching and empty hood in his hand. you are way braver than i am, i hardly walk up close to a safety fence and have never climbed over one. but you did get a good shot of it. amazing about the rumbling, i bet it was, it is much shorter through the earth than around the earth, the distance to Japan i mean. You found God's Art for sure in the ice

Beautiful, but not I have to go put on a sweater! Brrrrr.

Great pictures and yes, stay away from those edges.

Yikes! What a photographer won't do to get that superb picture! I do like the icicle shots,especially.

I have been enjoying your ice and snow pictures. There is something so peaceful about wintery scenery. It is interesting about the rumblings though. I am glad you made it to safety.

Nice shots, I love pictures that show a deep snow pack. And I'm glad you didn't tumble into the gorge when you heard the rumbling!

The black and white are my favorites too, beautiful shots all.

What you described does sound like the noise of an earthquake, I have heard it many times. But, and I don't know what kind of mountains you have, it could also be a large chuck or snow or ice giving way like in an avalanche.It sounds just like thunder when it cracks loose. Just be careful out there no matter what.

Gave you a shout on The Road today and will be emailing you a photo soon.