Muskrat Love and Snow and Ice....

We were drving down the highway one winter day
and I spotted something low to the ground
running it's little legs as fast as it could.
I had no idea at that time what aminal it was!
Of course, I had my hubby pull over to the side of the road
IMMEDIATELY!
(Luckily there was no other cars behind us!)
And?
He is used to me yelling at a moment's notice: "HONEY!! STOP the car!
so I can get out and take a photo of something that strikes my fancy.
He had seen it too...we were guessing as we were trying to get the car off the road without killing ourselves what the heck it might be.
As soon as we got closer, we both exclaimed at the same time:
"MUSKRAT!!!!"
He was waddling down the side of the highway as fast as he could as I was running behind him tryng to get a good picture. 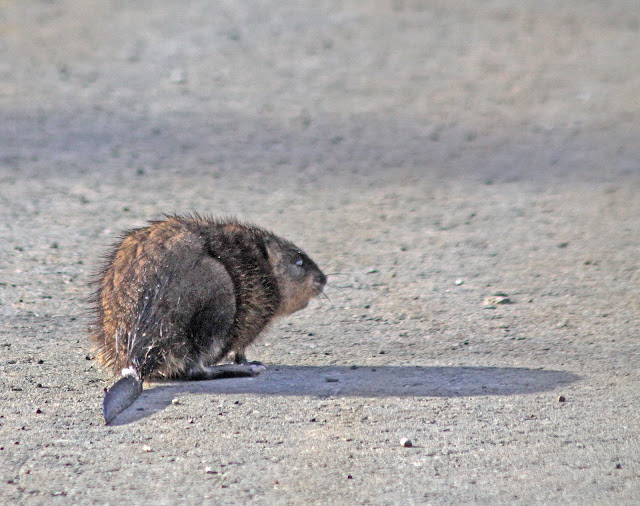 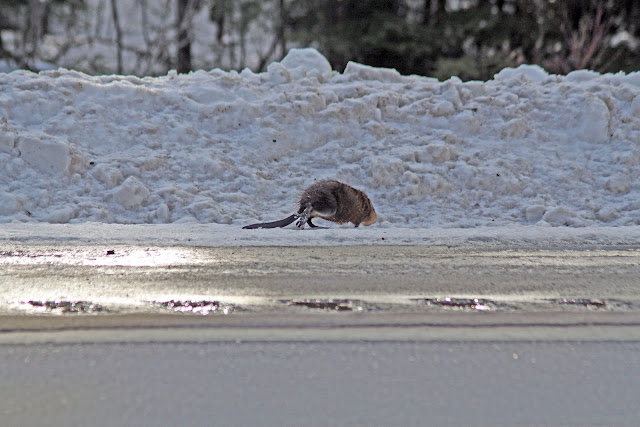 I was careful not to scare him and stopped when he stopped.  We have seen them before, but not that close.
I was amazed at the length of his tail!: 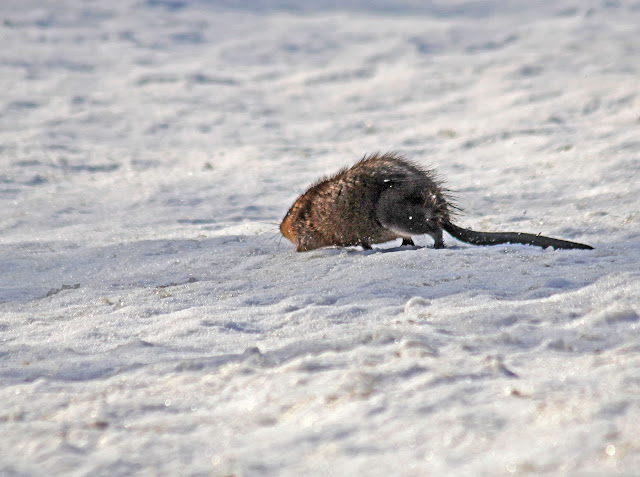 Several cars went by.  (Probably saying to themselves: "look at that crazy lady chasing a muskrat! I'm going to post this on Facebook for sure!)
I was afraid he was going to run ON the highway, but luckily
he finally climbed the snowbank
and ran to the woods.
Whew!
But I was so glad we saw him and that I got some shots of him before he disappeared.
﻿
So, then I calmed down...
and took some "normal" winter shots.
I was also surprised to see an oak leaf on TOP of the snow.
That little guy must have hung on to its Mother Tree as  hard as he could
until Nature decided he better let go. 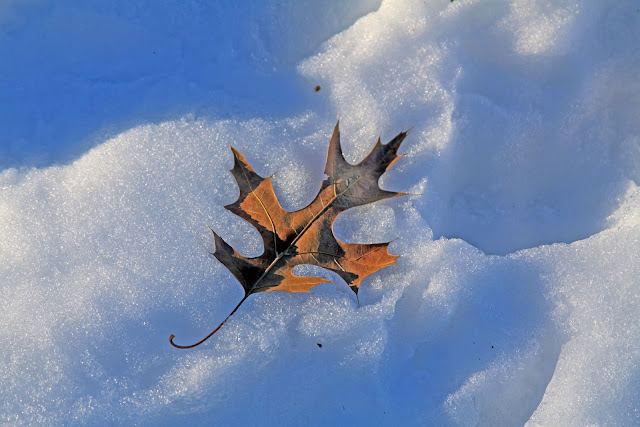 I just love going in the woods in the winter and listening to the quiet.
I was surprised to see a river with open water...usually they all freeze over.
But our winter was weird this past year, much warmer than usual.﻿ 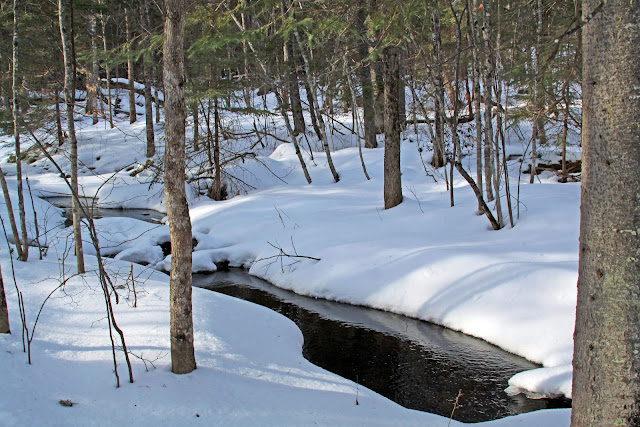 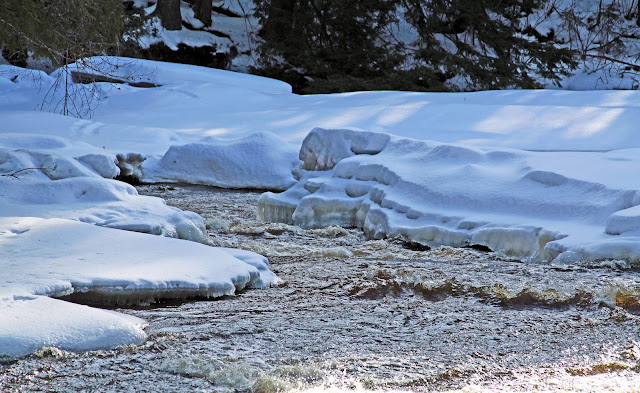 Snow and ice on the rock cliff beside a frozen waterfall: 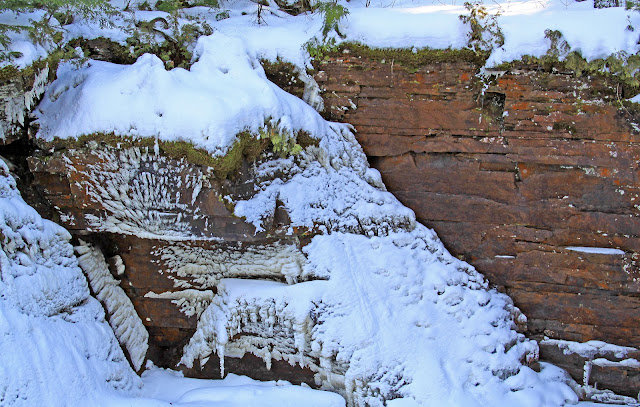 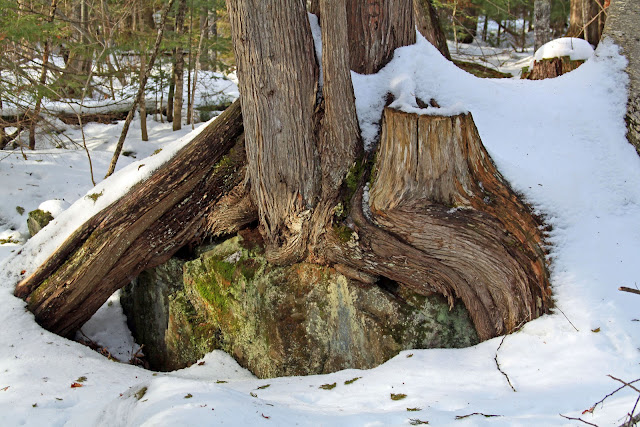 We wondered what left THESE tracks in the snow... 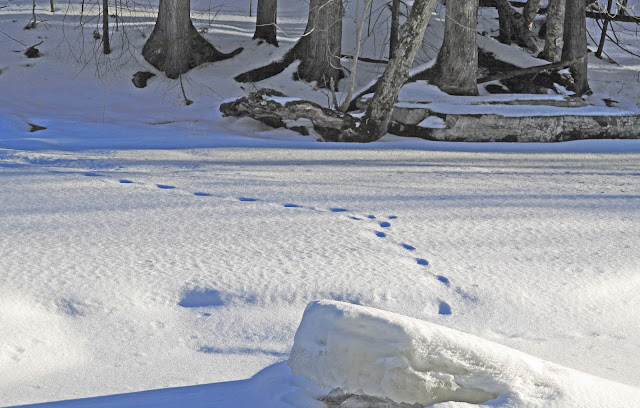 Part of the fun of going out to take photos (during any season)
is never knowing WHAT you are going to see....
alive or not....
Posted by The Retired One at 6:00 AM

these are cool...i dont know that i have seen a muskrat outside of captivity...it looks a bit like our groundhog but different...cool capture...

Only you would chase a muskrat! I had one chase me when I was about 7 months pregnant. Our old trusty dog came between us and tangled with the muskrat. The snow photos are stunning...but make me cold!!

A few years ago in January my husband had surgery and a couple weeks later to get out of the house for a while we took a drive to Island Lake State Park. It was all snowy and the sun was shining like crazy. I loved it! I definitely have to do that more often!!

We Muskrat Love of course!

Your shots made me feel a lot cold today while sitting in an air conditioned science room. Muskrats out and about I have never seen before. They are pretty soggy looking when swimming around in the lakes and ponds.

Your chase netted some great photos. I'll bet the poor critter wondered what the heck possessed you. Your snow scenes are beyond beautiful.

This time my favorite was the single leaf on the snow; a spot of beauty I totally would have missed, had it been me with the camera. That's what I love about your photos. You see the beauty most of us would miss.