When we arrived at our resort in Los Cabos, Mexico,
we quickly unpacked
and then took a tour of the grounds
and headed for the beach to check it out.
When we got there and looked out at the Pacific,
there was this HUGE yacht there.
It was there the entire time we were at the resort.
We wondered about it.
We wondered who in the heck owned it.
We wondered how much it cost.....
(More on this later in this blogpost)! 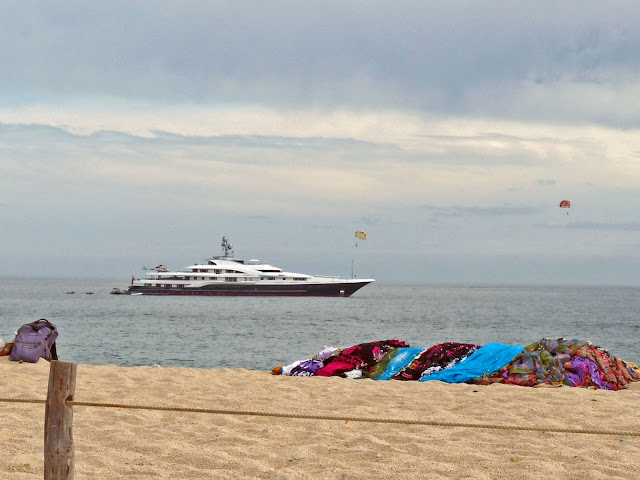 (The clothing in a pile you see in this photo are dresses for sale by beach vendors..more on these later in future blogposts!)  Also, do you see the parasailers by the yacht. They were checking it out too, I bet.﻿

A closer look showed me that not only was it the BIGGEST yacht I have ever seen, but it also had
its OWN HELICOPTER and its own HUGE speedboat too!:﻿ 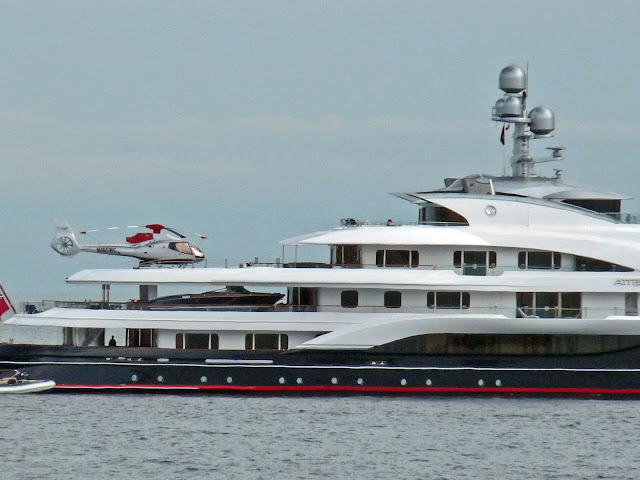 (somehow I could remember my childhood, and my mother's voice advising: "marry money!". Silly me, I hadn't listened).﻿


In all its splendor: 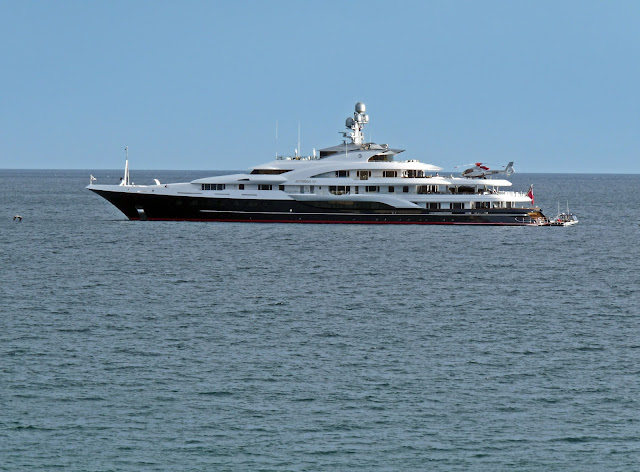 Maybe, must maybe
I could swim out and fake a drowning and they would come and pick me up
with their yacht to save me??: 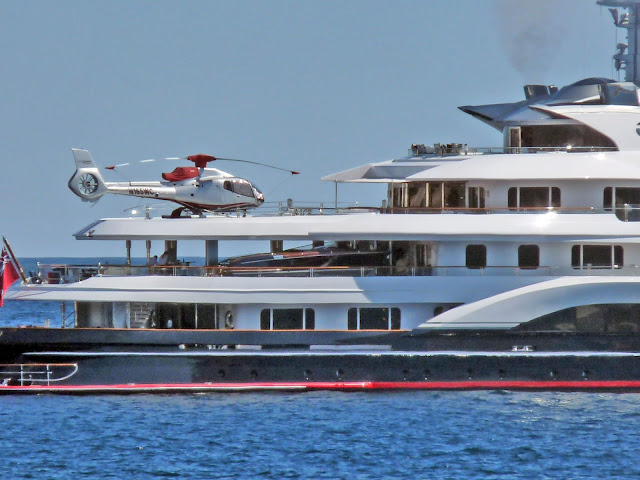 Now, this picture is for you to understand the immensity of the SIZE of that super yacht.
The boat BEHIND the super yacht is a CRUISE ship, folks....look how it compares!:﻿ 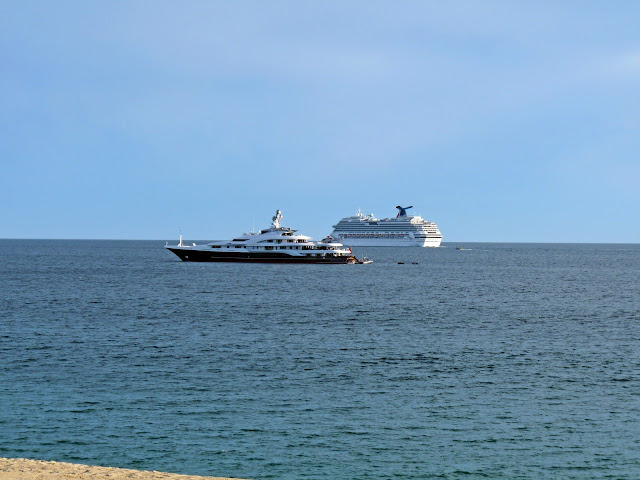 I used my zoom to get the name of the yacht.
I mean, that is what every spy reporter would do to find out more information
about who owned it (and how to get him to marry me) right???: 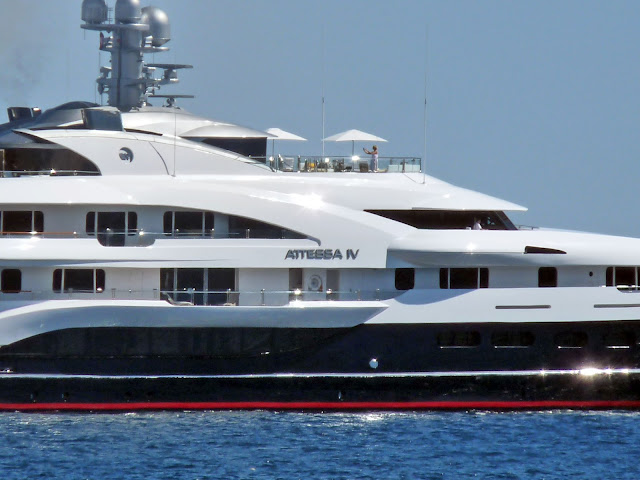 I had to take this picture...
it smacked of the irony of life.
Here is a Super Yacht, worth millions and millions of dollars
behind a vendor
who was just trying to make enough money on this sunny day
to perhaps feed his family....﻿ 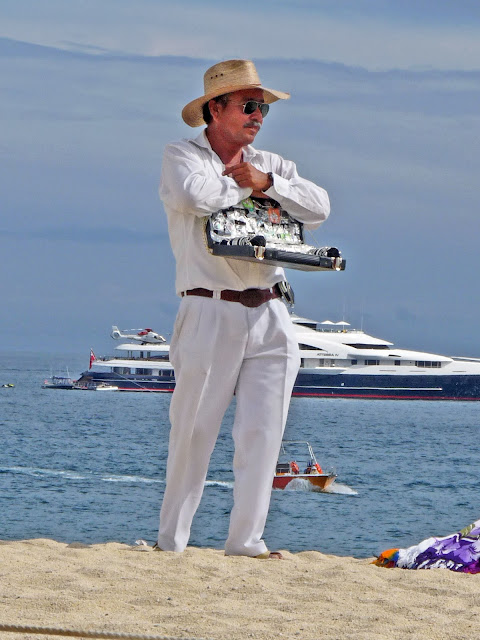 Somehow, the universe
gave ONE person immense wealth
and the other
not-so-much.
But who knows?  Maybe the man in this picture is happier.
Information on this Super Yacht is worth reading about in this link.

Or, better yet, watch this .link to a video.  (sorry about the ad before the video, can't help that!)


Highlights:
--its estimated cost is between 250 and 300 MILLION (yes that is right: MILLION!) dollars
--it is owned by an American businessman named Dennis Washington
--it has a SPA on board
--it has its own helicopter and huge speedboat on it
--Dennis (I figured we should be on a first named basis now that I have spied on him for a while) spent nearly 200 million dollars renovating this yacht.  Don't ask him though, he says it is "crass" to discuss its cost
--there are only three or four yachts this big in the entire WORLD.

Yup, I hang out with only the elite, folks...

Me and Dennis Washington went to Los Cabos Mexico together.

intersting disparity between the yaucht owner and bag man eh? it is a nice yaucht though....

How interesting! I love the shot of the vendor against the background of the expensive yacht! Can't wait to read more about your trip!

my favorite is the man in front of the yacht, he looks like he would save you if you were drowning. that is a super shot. wow that is one big boat, the fact the helicopter looks like a toy on it shows its size.

I think this Dennis guy might be a snob,seeing he has all that wealth.It is an impressive boat anyway.

Well, I'm with you. I'd also say that Dennis and I went to Los Cabos and that we are definitely on a first name basis. That is one fabulous yacht. Another thing that is similar between you and me, I didn't listen to my mother either when she told me it's just as easy to fall in love with a rich man as it is a poor one. Of course mom didn't know what she was talking about, I found it much easier to find the "less" than rich fellows. Doesn't matter, my life is rich anyway as I'm sure yours is too. Enjoy the fantasy!!!

The man in the photo looks like he belongs on that boat! He's looking pretty sharp for a vendor.

That is one well dressed vendor..are you sure that wasn't Dennis Washington LOL.. Looks like a great trip! :)